Mountain of a Man: How Charlie brought a nation together on Croagh Patrick 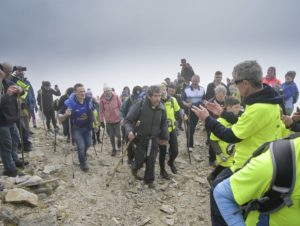 Charlie Bird arriving on the summit of Croagh Patrick last Saturday as part of his charity climb to raise funds for two charities which are very close to his heart – Irish Motor Neurone Disease (the illness from which he suffers) and Pieta, Ireland’s national suicide prevention charity. Pictures: Michael McLaughlin

Western People sportswriter Mark Higgins was among the hordes who joined with Charlie Bird in climbing Mayo’s ‘Holy Mountain’ on an emotionally charged day overlooking the shores of Clew Bay.

When he was first diagnosed with Motor Neuron Disease, a horrible, debilitating and ultimately terminal illness, Charlie Bird admitted that he was utterly devastated by the sheer shock of the news. “For a long time, it took a great deal of effort to process and come to terms with the fact that I haven’t got long left on this earth,” he wrote of the period after learning his diagnosis last October.
Barely six months later, Bird and his family had conquered that devastation and shock to achieve something truly remarkable. A global event involving thousands of people, coming together to raise awareness and millions of euros for two worthy charities. Taking the bad hand life dealt him last autumn and turning it into something wonderful.
As a celebration of life and the power of the human spirit, last Saturday’s Climb With Charlie on Croagh Patrick was a stunning success. From early in the morning, climbers congregated on Murrisk with the goal of ascending the Holy Mountain and becoming a small part of the day’s story. By the time we arrived around 9am, some early risers were already finishing their descent, with stories swirling of climbers who had set out for the peak long before the dawn.
There was a carnival feel to the morning, enhanced immeasurably by the bright sunshine and clear skies. A stubborn cloud of mist had hooked itself onto the summit of the Reek off in the distance but otherwise the day was mercifully clear and as the crowds began to grow, the sense of the occasion and festivity began to grow with it.
There was one question on everybody’s lips: where is Charlie? The man of the hour was proving elusive and for a moment it seemed as if his climbing party may have already struck out for the mountain, but they were eventually located in the back garden of Campbell’s pub, greeting the friends and well-wishers who had come out to offer their support.
Just past 10 o’clock, Charlie decided it was time for the business of the day to begin. The long-time RTÉ broadcaster and journalist climbed atop a table, pointed defiantly for the mountaintop and let out a roar. MND may have robbed him of the voice that became a familiar as family in Irish living rooms over a four-decade long, career but there was no mistaking the man’s message: let’s climb. 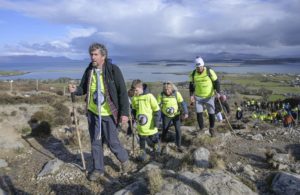 From start to finish, the up and down journey of his climb of the Reek took Charlie Bird and his family six hours. Picture: Michael McLaughlin

There were a few ceremonial steps to get through, including the release of a symbolic peace dove in solidarity with the people of Ukraine (blue and gold flags flew proudly all the way up the mountain) and a moving blessing delivered by Westport’s Fr Charlie McDonnell and Church of Ireland Canon Jen McWhirter.
With that, the climb could begin in earnest. The pace was steady all the way up; despite his diagnosis, Charlie remains in good physical shape and a lifelong love of walking and hiking served him well on the testing lower slopes of the Reek. He was joined by a cadre of familiar faces from RTÉ, including Ryan Tubridy and Dermot Bannon, and good friends like Daniel O’Donnell and Barry McGuigan.
As we gained altitude, the group became more strung out and we found ourselves climbing solo. The mountain was busy but not as frantic as can be the case on Reek Sunday. Organisers and authorities had appealed to supporters of the Climb With Charlie to complete their climbs or hikes in their own localities if possible, to avoid the danger of overcrowding on Croagh Patrick, and those appeals seemed to have been heeded. At over 200 locations around Ireland and overseas in places like the US, Australia and Spain, supporters of the cause did their bit in solidarity with Charlie’s mission.
You can overhear some great conversations as you make your way up the Reek, particularly on a day like Saturday when the going is comparatively straightforward and the mood is so jovial.
One husband was imploring his wife to be careful with her footing as they made their way down over the treacherous loose rock near the summit. “I will be careful,” she responded. “But I don’t want to miss any celebrities.” A broken leg will heal, after all, but a missed chance of a selfie with Dermot Bannon will hurt forever. 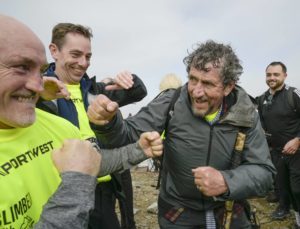 Former World champion boxer, the ‘Clones Cyclone’ Barry McGuigan was another of the several celebrities who made the climb in support of Charlie Bird. Picture: Michael McLaughlin

Another man we encountered on the way up was proudly telling anyone who happened to be within earshot that this was the first time he had ever descended the Reek in daylight hours. “When we were young we’d be back at the bottom by four in the morning,” he reckoned.
You could tell by the accents that the crowds had come from all over the country to participate. The Dubs were healthily represented in support of one of their own; judging by the reactions as the full vista of the mountain opened up before them, some of the visitors had never so much as seen the Reek before, let alone tried to climb it.
But we also met people from Kildare, from Donegal, from Cork and Kerry, and plenty of locals who had completed the pilgrimage plenty of times before but never on an occasion as emotionally charged as this. There was a sense of everybody being in the effort together. Offers of help were forthcoming to anyone who needed it and encouragement was freely given to those struggling their way to the top.
We crested the shoulder of the mountain and braced ourselves for the last push to the summit, coming upon the remarkable stone staircase which is in the process of being created to make the last stretch of the climb more accessible to climbers. The staircase is a godsend. It has made the journey up the cone of Croagh Patrick much, much safer.
We learned that there is a team of workers up there continuously, doing hard, physical work high up in the clouds day after day, using the loose stones that litter the mountain’s upper regions to build a secure path to the summit. The stairway hasn’t reached all the way to the top just yet but when it does, it will make the Reek more accessible to climbers who may otherwise be unable to scale it and undoubtedly reduce the number of accidents and injuries on the mountain.
Charlie Bird and his family reached the top of Croagh Patrick just before 12.30pm, just as a nasty hail shower had passed and the clouds around the peak dissipated. The welcome he received as he completed his climb was a rapturous one, with the Clew Bay Pipe Band striking up and a huge crowd cheering his remarkable accomplishment.
Addressing the crowd at the top of the Reek via his speaking aid, Charlie said that in his 40 years covering Ireland and its people as a journalist, he had never known support and kindness of the sort he had received in the last few months. 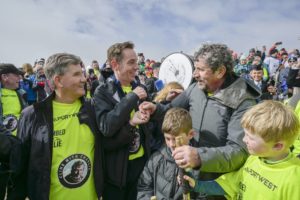 Among those to greet Charlie atop Croagh Patrick were singer Daniel O’Donnell and his former RTE colleague Ryan Tubridy on whose Late Late Show he had first declared his intention to climb the mountain. Picture: Michael McLaughlin

“I had a mad idea when I told Ryan Tubridy off the top of my head that I wanted to climb Croagh Patrick. What is amazing now is that we have people all over Ireland and in many places abroad climbing with me. The support I have received has lifted me in a way I cannot express in words,” he said.
“Today is not just about me. It is about everyone who has a terminal illness. After the last couple of years we have all gone through with the pandemic, we know that many people had their own personal mountains to climb every day.
“I have no idea how long more I’m going to survive for, but for every moment I am around, I’m going to extend the hand of friendship.”
After lighting candles in the chapel greeting the crowds, Charlie and his family began to make their way back down the mountain. They arrived back at base camp at 4pm, exhausted from the day’s physical and emotional exertions but immensely proud of what they had achieved in terms of raising funds for charity and offering a message of hope and resilience for all those fighting their own battles with illness.
The Climb With Charlie fundraiser remains open. To make a donation to the cause, visit climbwithcharlie.ie.