By Mark Higgins
There’s no sense in dressing up Mayo’s relegation from Division 2B of the National Hurling League as anything other than what it is: a major, major blow. Defeat to Wicklow in Tullamore last weekend consigned Mayo to life in Division 3A next year, where they will be playing against the likes of Roscommon, Monaghan and Louth. From the heights of winning the Nicky Rackard title at Croke Park last July, it’s a long way to fall. 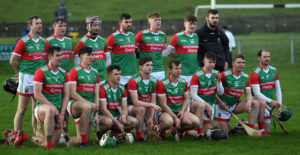 The Mayo team that lined out for the Round 1 clash with Wicklow in this year’s Allianz National Hurling League. A one point defeat to the same opposition in the relegation playoff sees Mayo in Division 3A for 2023. Picture: David Farrell Photography

Some perspective is probably no harm here. The league is only the league, after all. Teams go up and teams go down. One bad campaign won’t undo all the good work that has been done with this team over the last three to four years and there’s no reason to suspect Mayo won’t be more than capable of bouncing straight back up to Division 2B next spring.
But neither would it be wise to write off the consequences of this relegation, Mayo’s second in the league in the space of just three seasons, having dropped from Division 2A to 2B in 2020. The county’s flagship team sets the tone for hurling at all levels in Mayo and a time when the game is enjoying an upswing at grassroots level, with Ballina and Claremorris re-joining the adult ranks and Moytura getting up and running again, Saturday’s result has the feel of a reality check.
This was a difficult league campaign for Derek Walsh and his players on a few different fronts. The biggest problem by far has been the unavailability of players. In the Round 5 defeat to Donegal last month, Mayo had just sixteen fit outfield hurlers to choose from. The situation wasn’t much-improved in O’Connor Park last Saturday, as evidenced by the sight of Shane Boland, one of the team’s stalwarts, having to be brought back into the game for the last 20 minutes despite having gone off injured in the first-half.
Keith Higgins played an entire 70-plus minutes despite having walked the distance from Castlebar to Castlerea over the previous three days. At the age of 37, it’s a lot to ask of a man who has given more than enough. Granted, Higgins would probably have wanted to play even if he had to walk all the way to Tullamore on Saturday morning, and he still was one of Mayo’s better performers on the day, but that his presence was required at O’Connor Park is telling.
Where have all the players gone? Tooreen’s run to the All-Ireland club semi-final had a big bearing. Mayo’s opening league game against Wicklow in Ballina was just two weeks after Tooreen’s loss to Naas and a number of the club’s players understandably needed time to rest and recover after a long and arduous club campaign.
Some of the Tooreen players, like Shane Boland, Sean Kenny, David Kenny, Gary Nolan and Stephen Coyne, have filtered back into the county team at different points over the course of the league and all of those names featured on Saturday. But the likes of Cathal Freeman, Michael Morley, John Cassidy, Sean Regan and Oisin Greally have not featured for Mayo in this league campaign, and it remains unclear how many, if any, of those players will be returning for the championship. (Mayo manager Derek Walsh opted not to speak to the local media after the game against Wicklow in line with the GPA’s request.) There’s a certain irony in the success of a club team having an indirect negative effect on the county side, but very few senior county squads, in either code, depend as heavily on a single club for players as Mayo depend on Tooreen. The players aren’t robots either, and they certainly can’t be faulted for opting out of the county team to focus on work, college or other commitments.
Injury has also hit the camp hard over the last few weeks, and while that’s a burden for every county team to carry, it has been especially difficult for a Mayo squad which can be relatively thin at the best of times. Important players such as Boland, Eoin Delaney, Adrian Philips and Daniel Huane have all missed game time over recent weeks, while Kenny Feeney, who re-joined the panel after his return from Australia, has also had limited minutes.
Mayo will need to park the disappointment of relegation pretty much immediately. The Christy Ring Cup, in which Mayo will play this year for the first time since 2018, begins next weekend, with Mayo down to host Kildare. This year’s Ring championship comprises six teams (Mayo, Kildare, Sligo, London, Wicklow and Derry) who will all play one another in a round-robin format. Mayo will have four games over the span of five weekends, including a trip to Ruislip in Round 3, so they’ll need to get back on the horse quickly. 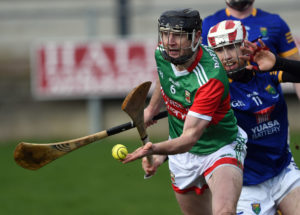 Keith Higgins remains a key component of the Mayo hurling team but will need serious assistance if the side is to retain its Christy Ring Cup status. Picture: David Farrell Photography

Mayo have played all of their championship opponents in the league already this year (with the exception of Kildare, who played in Division 2A) so they should have a good idea of the scale of the task facing them in the Ring. And they know they can compete with those teams – with the exception of the Derry game, all of Mayo’s league matches were reasonably competitive. The hope will be that the unique environment of championship hurling leads to an uptick in form.
Walsh and his players, in the wake of that Rackard final win over Tyrone at Headquarters last summer, made no bones about the fact that the Christy Ring is where they feel they belong. Now is the time to back up those sentiments. A league relegation obviously isn’t the optimum preparation for the championship but Mayo need to refocus their minds this week.
Because the talent is there for Mayo do well in the Ring. Even in what has been a rough league campaign, there have been encouraging signs. Eoghan Roe from Claremorris has been an impressive addition in the half-forward line. Kenny Feeney’s return will add firepower and some much-needed directness. Sean Kenny has established himself as a first-choice midfielder. Keith Higgins remains a sublime hurler.
The job for Walsh and his management team over the next couple of weeks is to resolve as many of the injury issues as possible and reset his players’ minds on the championship. The league is only the league, after all.