Mayo team for league final clash with Kerry is named

The GAA’s all-time top scorer in the senior football championship, Cillian O’Connor has been named among the Mayo substitutes for Sunday’s National Football League Division 1 final against Kerry. 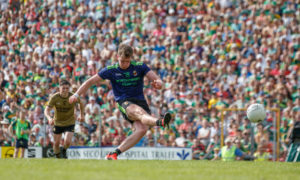 Cillian O’Connor has returned to the Mayo squad in time for Sunday’s clash with Kerry. Picture: INPHO/James Crombie

The Ballintubber attacker has not played for club or county since sustaining an Achilles injury against Clare in the 2021 league campaign and Sunday marks his first inclusion in Mayo’s match-day squad this season, likewise Darren McHale from Knockmore who has struggled with injury since the tail-end of the Green and Red’s march to last season’s All-Ireland SFC final.

McHale is somewhat surprisingly joined on the bench by his Knockmore club-mate Aiden Orme who, having started the first six of Mayo’s seven games en route to the Division 1 final, sees James Carr, Jason Doherty and Ryan O’Donoghue all retain their place in the full-forward line.

Conor Loftus is added to the attack in place of the injured Diarmuid O’Connor in what is one of four changes to the side that started last weekend’s victory over Kildare.

Padraig O’Hora continues in place of the injured Brendan Harrison who he replaced after just two minutes of that game, captain Stephen Coen takes the place of David McBrien in the full-back line and Enda Hession starts in place of Rory Brickenden at wing-back

Rory Byrne retains the No.1 jersey as goalkeeper Rob Hennelly remains absent from the panel. Paddy Durcan is also marked absent for Sunday so those two along with Diarmuid O’Connor will give cause for concern to Mayo supporters with the Connacht SFC quarter-final against Galway now only three weeks away.

The Division 1 final has a 4pm start at Croke Park and referee for the game is Cavan’s Noel Mooney. It will be preceded by the Division 2 final between Galway and Roscommon. Extra-time will be played in both games if the sides are level after 70-minutes.