Charlie Bird reached the summit of Croagh Patrick today where he thanked the “incredible support” he has received in his journey. 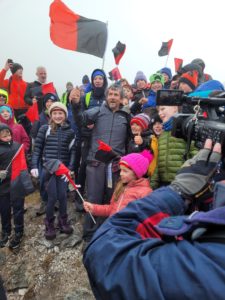 Joined by hundreds of people, he led the climb of friends, family and supporters to the summit on Saturday to raise funds for two charities; The Irish Motor Neurone Disease Association and Pieta House.

More supporters are also taking part in almost 200 separate climbs around Ireland, while groups have also organised fundraisers in the US, South Africa, Australia and Spain.

The Climb with Charlie campaign has so far raised over €1 million, and donations can still be made on www.climbwithcharlie.ie

Among the many well-known faces who descended on Murrisk, near Westport to tackle the Reek with Charlie and his wife Claire was Late Late Show host Ryan Tubridy, singer Daniel O’Donnell, former boxer Barry McGuigan, musician Matt Molloy and architect Dermot Bannon.

Charlie made a speech to his supporters at the summit before lighting five candles in the chapel.

The candles were lit for his friend, cancer campaigner Vicky Phelan, people suffering from a terminal illness, people in a dark place with their mental health, people involved in the fight against Covid and the people of Ukraine.

Bird set up the Climb with Charlie campaign following his own diagnosis with Motor Neurone Disease in an effort to support people who have to climb their own physical and mental mountains each day.

“I want to thank people all across the country for their incredible support throughout this journey. All of the generous donations will go to the two charities which are so close to my heart. It is an amazing gesture of support for me and my family.

“Our campaign is still accepting donations on www.climbwithcharlie.ie and I would urge everyone to donate what they can to support the amazing work the Irish Motor Neurone Disease Association and Pieta do on a daily basis.”

The campaign will continue for the next three months.