At the half-time interval during Mayo’s very first game of this year’s National Football League campaign, there was an announcement made across the tannoy in Markievicz Park that a man’s wedding ring had been found and could be collected in the press box.
It ended up that day a harder thing to explain how Donegal had managed to cough up a five points lead against 14-man Mayo than how any man could actually lose his wedding ring in the first place. Unless of course the ring was yet without finger and ready for a big proposal? Mayo’s Jordan Flynn scores a goal against Kildare in the victory that confirmed the Green and Red their place in Sunday’s NFL Division 1 final. Picture: INPHO/Conor McKeown

Probably not, we thought. Markievicz Park has its charms alright but it’s no Eiffel Tower and an unlikely place to ask someone to marry you. Whatever about July, definitely not in January anyway.
Full-time arrived, the ring remained uncollected and Mayo, thanks in a very big way to Rob Hennelly, had their first point on the board. A saved penalty, a last gasp converted free, the Green and Red were up and running – and kept on running all the way to this Sunday’s Division 1 final.
For those of us who doubted it was their intention to qualify, the answer was rammed down our throats last Sunday. Rammed.
Mayo just wouldn’t be Mayo if they hadn’t that strangest and excruciatingly frustrating ability to go from being so bad to so good in the space of a week – damn it, they can manage that in the same half of football let alone between games. But any notion that this team – after producing such an uninspiring performance away to Tyrone – had for some odd reason no interest in reaching this season’s National Football League decider was quashed with a serious statement of intent in Carrick-on-Shannon.
And we salute them for it.
His team seven points in front and just one minute of normal time remaining, the elder statesman, Lee Keegan, five-time All-Star, former Footballer of the Year, launched himself sideways like how a dog might to catch a frisbee, to block an attempt on the Mayo goal by Brian McLoughlin. The Westport father showed no consideration whatsoever for his own safety amid the flying boots. Had the Kildare substitute even scored, it was never going to be nearly enough to alter the outcome of the match – but that’s not how Keegan plays the game. It’s not how Mayo, to a man, played the game last Sunday.
Their improvement on eight days earlier was meteoric.
Be it their hounding of wing-back Tony Archbold who coughed up the ball during a Kildare attack to allow the creation of Ryan O’Donoghue’s first-quarter goal, or Michael Plunkett’s textbook block that kickstarted the move for O’Donoghue’s third point, or Aidan O’Shea’s shuddering collision with Kevin Feely that left imprints of both men in the turf… the Mayo players undoubtedly fed off the raucous atmosphere generated by the five-figure crowd that had jammed itself inside the Shannonside venue.
With cars abandoned from one end of town to the other, it could well become a question that one day catches out more than a few Leitrim GAA quiz buffs: For what league game was the biggest attendance ever in Pairc Sean Mac Diarmaida? Last Sunday’s has to be a contender if not the outright winner.
That Mayo have reached the Division 1 final playing each of their seven games in some other county’s ground makes the achievement of finishing second in the table all the more remarkable. And that this was the same Mayo team that had scored only nine points against Tyrone eight days earlier was scarcely believable; they had equalled that haul after only 24-minutes here. In saying that, Kildare scored more against Mayo in the first-half than Tyrone had over the course of a full game so it’s not as though there wasn’t plenty to be working on this week, as Jack O’Connor sits down to plot Kerry’s plan of attack at GAA HQ this Sunday. If the likes of Ben McCormack, the Kildare centre-forward, can score four points from play before half-time, think what David Clifford or Tony Brosnan might do if afforded the same sort of room and space.
But for entertainment alone, last Sunday’s was up there with anything a Mayo team has produced in the league for quite some time. In terms of a 70-minute performance, when last had they finished a game as good as they had started it, especially against a quality Division 1 opponent? 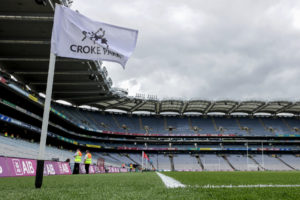 Mayo will return to Croke Park hoping they can win back the Division 1 crown they last lifted in 2019. Picture: INPHO/Laszlo Geczo

The sight of Swanee O’Hora twisting inside the Kildare full-back with the agility of a contortionist and curling over a point Ciaran McDonald would have been proud of, and then to console his dazed opponent with a pat on the head before trotting back to his corner-back position, was the ultimate in cheek – and typified the abandon that marked so much of Mayo’s play. It was an abandon that allowed O’Hora score not one but two points, so too his fellow defender Michael Plunkett, and an abandon that saw Jordan Flynn, if he hadn’t already, confirm his arrival as a serious inter-county midfielder once and for all with a valuable goal and two points.
The young Crossmolina man may not have had the smoothest of introductions to senior football but hands down he is Mayo’s most improved footballer of the season to date. That question of who should partner Mattie Ruane at midfield is no longer a question.
Ryan O’Donoghue was Mayo’s other goal-scorer but really, Jason Doherty, the returning James Carr, whose first-half performance was immensely encouraging for a player absent for so long, Jack Carney and O’Donoghue again, on another day could all have added to their side’s green flag tally. Let’s hope they’ve kept one or two in the bag for Sunday. It’s likely we’ll need them.
But Mayo have every reason to arrive in Croke Park feeling every bit as confident as Kerry that they can lift the Division 1 trophy – and maybe even more confident. For when the last Division 1 final was played, pre-pandemic, it was they who had the Kingdom’s number at GAA headquarters in 2019. In fact, when you also factor in the All-Ireland finals of 2016, ’17, ’20 and ’21, the upcoming game will be Mayo’s sixth national senior final in seven years – experience that even Kerry can’t boast.
Another Mayo victory would carry an ocean of benefits, not least because even since 2019 there have been so many newcomers to the team for whom to win a National League would represent a major milestone in their young careers, Ryan O’Donoghue, Oisin Mullin, Aiden Orme, Jordan Flynn, Enda Hession, Jack Carney, Rory Brickenden and David McBrien, to name just a few.
And, of course, there would be the timely reminder to Division 2 finalists Galway and Roscommon that they were the support acts for a reason.
Roll on Sunday.