He tipped them at the very start of the campaign and Diarmuid Connolly still believes Mayo will be crowned National Football League champions this weekend as they prepare to face off against Kerry at Croke Park. 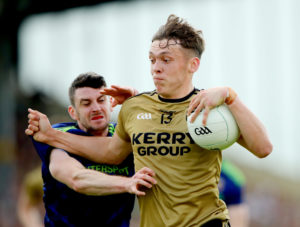 Kerry’s David Clifford is tackled by Mayo defender Brendan Harrison in their 2019 championship clash. Harrison misses this weekend’s Division 1 final against the Kingdom due to an injury picked up against Kildare last weekend. Picture: INPHO/James Crombie

James Horan’s side are underdogs for Sunday’s showdown but Connolly believes keeping David Clifford quiet will be high on their to-do list in search of victory.

“We haven’t seen Mayo’s full hand yet,” reckons Dublin legend Connolly. “Cillian O’Connor hasn’t played many minutes and Aidan O’Shea and Paddy Durcan have been in and out. They are solidifying the midfield and I think that’ll be a huge battleground on Sunday. The kickouts will be pivotal – can they keep possession from their own kickout and can they disrupt the Kerry kickout which has been impressive all season?

Giving his thoughts to BoyleSports ahead of the game, Diarmuid Connolly said that the match-up between Mayo’s midfield pairing of Matthew Ruane and Jordan Flynn with Kerry’s Diarmuid O’Connor and Jack Barry would be huge but that Mayo’s biggest issue is who they assign to pick up David Clifford.

“Who can keep this man quiet? He has been a standout player across all the leagues, he’s been unbelievable. He’s nearly unmarkable at Croke Park given the space, but if I was James Horan, I’d be putting Paddy Durcan on him,” admitted Connolly, explaining why.

“He’s not your out-and-out man-marker, but he has the physicality, the pace, and the size to compete with Clifford in the air and on the ground. I don’t think Padraig O’Hora or Oisín Mullin have the same ability to do that, so that’ll be a key match-up.

“I don’t think Kerry are completely sure either on who will start at corner-back and that’s where Mayo can get a lot of joy if they get the ball in there nice and early. There will be rewards for them from one-on-ones in that full-back line.

“I tipped Mayo at the start of the year and I’m sticking to my guns, I think they’ll come out on top here. I was actually impressed with them when they went down to Tralee and they were unlucky not to come away with a result. But that didn’t matter to me, the performance really stood out.”