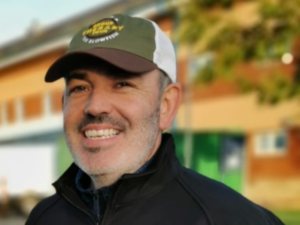 A Ballinrobe man has already raised nearly €6,000 for a charity close to his own heart.

Andy Walsh from Ballinrobe was diagnosed with Multiple Sclerosis (MS) just two years ago and is now preparing himself to join former RTÉ news reporter Charlie Bird on his Croagh Patrick ‘Climb with Charlie’ on April 2 next.

In preparation for his challenge, Andy has set up an iDonate page to raise money for MS Ireland and the Irish Motor Neurone Disease Association.

Andy, who is well-known in motorsport circles in the county while he also works in Ballinrobe Community School, was shocked to discover he had MS on March 12, 2020. “After some investigation and hospital visit, I left a week later with a diagnosis of Relapsing Remitting Multiple Sclerosis (RRMS). There has been some big challenges and changes in my life since my diagnosis and as it comes up on two years since that date, I want to give back to MS Ireland, who helped me have a greater understanding of what I am dealing with.”

He said he wants to raise awareness of the work that MS Ireland do, and awareness of the condition in general. “I have also seen first-hand the horrible effects of Motor Neurone Disease on people I have known and watched the terrible disease consume these wonderful people. MS and Motor Neurone Disease share some similarities but there are key differences between the two in terms of progression, treatment and outlook. The exact cause of both remain unknown and neither currently have a cure,” said Andy.

He said everyone has mountains to climb in their lives and he is asking for the price of a coffee and a sandwich at €5 or more if possible! To donate visit: https://www.idonate.ie/andy-walsh987

New bus service that will link Mayo and Galway is launched