The chairperson of Mayo GAA has said that all signs point to MacHale Park being ready to host the Connacht championship quarter-final between Mayo and Galway on Sunday, April 24. 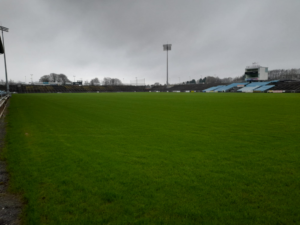 MacHale Park has not hosted a game since last August as extensive development works were carried out on the playing surface, but Seamus Tuohy told this week’s monthly meeting of the Mayo County Board that the executive is hopeful the surface will be ready for the Galway game in just under four weeks’ time.
Tuohy said that the pitch is currently being cut every two days after a recent growth spurt caused by the fine weather and that a recent round of inspections and tests carried out on the playing surface yielded positive results.
A final decision on the staging of the Mayo v Galway game will not be made until after a final inspection is carried out on the surface on April 13-14. The final call on the venue for the game will be made by the Connacht Council.