Clubmates are named captain and vice-captain of Mayo 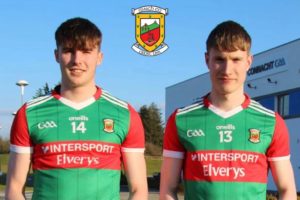 Frank Irwin and Dylan Thornton have been appointed captain and vice-captain respectively of the Mayo U20 football team.

Ballina Stephenites GAA Club has been doubly recognised in the captaincy of this year’s Mayo U20 football team with the captain’s and vice-captain’s positions both being held by two of their own.

Mayo manager Maurice Sheridan has announced that Frank Irwin will captain the team into battle against Galway in the Connacht championship opener the week after next. Irwin has featured on a couple of occasions for the Mayo senior football team in this year’s National Football League campaign. The U20 team’s vice-captain is Dylan Thornton.

The Connacht GAA Centre of Excellence in Bekan will host the championship meeting of Mayo and Galway on Wednesday, April 6 at 7pm.

Sam Callinan and Donnacha McHugh are two other senior panellists who feature in the Mayo U20 squad.