Communities across East Mayo will come together to bid farewell to Carracastle native Jason Corrigan whose funeral takes place today (Sunday) in Charlestown.

The former Charlestown Athletic and Ballaghaderreen FC winger was diagnosed with Motor Neuron disease in August 2018 and this week finally succumbed to the condition, peacefully, after a bravely fought long illness. He was 29-years-old. 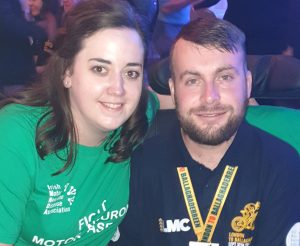 In June 2020, Jason spoke movingly and with great honesty to the Western People about his diagnosis and said there was no point lying in bed all day dwelling on things. It was typical of the spirit everyone knew him for.

And that he did.

Jason and partner Rachel Harraghy welcomed a baby daughter Myla into the world later that summer.

An employee at Harmac Medical Products in Castlerea, the communities of Carracastle, Charlestown and Ballaghaderreen had organised fundraisers for Jason, and a GoFundMe page was also created. They all combined to help Jason and his family in his caring these past few years.

The League Management Committee of the Mayo Football League are among those to have expressed condolences to the family and friends of Jason and to Charlestown Athletic with whom his father Pat has been heavily involved over the years.

“Jason played for his local club for many years and bravely fought his toughest battle off the pitch in the last few years with Motor Neurone Disease. May his gentle soul rest in peace,” the League said in a statement.

Games involving Killala FC for whom Jason’s brother Michael plays have been cancelled this weekend as a mark of respect.

Charlestown Athletic has also offered deepest sympathies and condolences to all of the Corrigan family and friends on the passing of their former player and Ballaghaderreen FC also spoke of their sadness at learning of Jason’s passing.

“Jason represented the club many years ago and was a joy to work with and be around,” the club said in a post to social media.

Removal from Jason’s parents’ home in Palmfield, Carracastle is today for Funeral Mass at 1pm in St James’s Church, Charlestown. Burial is afterwards in the adjoining cemetery.