Was this the first instalment of an epic Mayo-Kerry trilogy?

Mayo won’t be too disappointed with last Saturday evening’s defeat to Kerry in a rain-sodden Tralee. Sure, it would have been nice to have won and practically secure a league final spot but James Horan and Co will be looking at the bigger picture. 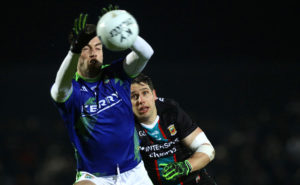 I can see Mayo and Kerry meeting again on a few more occasions later in the season when there will be much more at stake so if we were going to fall short in one, Saturday’s encounter was definitely the one to lose.
The game itself was a cagey enough affair with quite a few mistakes from both teams. This caginess and sloppiness could be attributed to the abysmal weather conditions but it looked as though both sides were sizing each other up and trying to get a measure of their opponents.
I think deep down both Kerry and Mayo consider each other as a major obstacle to winning silverware this year so there was huge respect shown between the teams without either revealing their true hand. A lot of men were moved behind the ball and much of the football was played in front of the mass defences.
Truth be told, there isn’t much between the teams in terms of overall ability, structure and talent. Mayo have a better goalkeeper, defenders and midfielder but Kerry have the magic dust up top, particularly in the form of David Clifford.
Clifford kicked four points from play on an evening when scores from play were difficult to come by. For a big man, he has balletic feet and razor-sharp ball skills. It’s hard to know how to mark him. If you stand off him he will score at will from anywhere.
If you get too close he can throw you off with his 90kg frame. He has such long legs that he always seems to get his shot off despite the desperate dives of defenders who try to block him down. In spite of his impressive haul on Saturday evening, he still looks to be a bit off peak physique.
He has played so mang games already in 2022 between Sigerson and the NFL that he has probably had very little time for any substantial, meaningful training. Clifford, and Kerry, will play better too when Seanie O’Shea is back on the park.
Not only does he provide a stream of assists for Clifford but he also changes the focal point of Kerry’s attack and makes them less one-dimensional.
James Horan tried to hammer the hammer on Saturday evening by assigning Oisín Mullin with the unenviable task of tracking Clifford. I don’t think it worked and don’t like the tactic of positioning Mullin in the full-back line. It restricts his forward movements and robs Mayo of a line-breaker further out the field. I can understand why Horan did it given the Kilmaine man’s impressive physical attributes but I would utilise a more pragmatic and miserly defender like Padraig O’Hora or Lee Keegan for man-marking duties.
Speaking of miserly defenders, much has been made of Kerry’s newfound parsimony at the back since Paddy Tally’s addition to Jack O’Connor’s coaching ticket. While they definitely look tighter, meaner and more structured, the acid test will come on the dry, open spaces of Croke Park in the coming months. Mayo’s defensive line-up had a championship look to it and I don’t envisage too many changes between now and the Galway game in that department.

James Horan tried to hammer the hammer on Saturday evening by assigning Oisín Mullin with the unenviable task of tracking Clifford. I don’t think it worked and don’t like the tactic of positioning Mullin in the full-back line. It restricts his forward movements and robs Mayo of a line-breaker further out the field.

To limit Kerry to one goal chance was a fair achievement and, credit where it’s due, Kerry’s goal was beautifully engineered with quick, soft hands and heads-up football.
It could be argued that goalkeeper is the most important position on the field in the modern game.
Kick-outs are the most common set-piece in any match so if you’re struggling there, you’re struggling. Rob Hennelly continued his good form and with Hennelly and David Clarke, Mayo have been blessed to have such consistency and solidity in that position for the past decade. Goalkeeper has become a problematic position for Kerry as evidenced by the number of players they have used there in recent seasons.
Shane Murphy made a brilliant save to deny Diarmuid O’Connor before the break but the jury is still out on him. He flapped at a few balls and Mayo gobbled up his long kickouts.
Think of the likes of Stephen Cluxton and Niall Morgan, the shot-stoppers of the most recent All-Ireland winning teams. They are huge characters who were in total control of their brief. Kerry will need Murphy to improve quickly as they won’t win an All-Ireland until they find a top operator between the sticks.
Mattie Ruane and Jordan Flynn are also beginning to form a strong bond in the middle of the field and I’d be surprised if they were not the midfield pairing for Easter Sunday’s championship encounter against Galway. Flynn is good in the air and a fine kick passer whereas Ruane is up and down the pitch all day. Their strengths complement one another nicely.
Every time I see Fergal Boland play he seems to score. Like Clifford, he found a way to unpick the crowded defences and negotiate the tough conditions when nailing some gorgeous points. Given his excellent scoring return, it is a wonder that Boland has only been a bit-part player in the last few seasons. I don’t know what goes on in training but based on match performances alone, Boland deserves a prolonged spell in the team. Mayo have been motoring well this year but scoring points from play has been the team’s Achilles heel in recent weeks. With that mind, Boland’s ability to kick points should be valued. Scoring is the toughest thing to do in any sport. After scoring an incredible 59th career hat-trick over the weekend, Roy Keane heralded the “genius” of Cristiano Ronaldo. Keane witheringly remarked, “Scoring goals is the hardest part of the game. Some players don’t even score in training!” When you have a bona fide scoring threat, you must find a way to get them in the team. 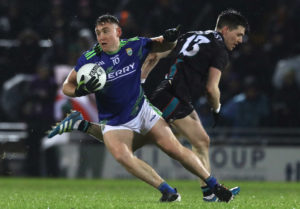 As a light of stature scoring forward who was in and out of the Mayo setup over the years, I empathise with Boland’s situation. With small players, I often lament the fact that people judge diminutive footballers on what they cannot do i.e. tackling, high-fielding and galloping, rather than the obvious benefits and unique skills that they bring to the fold. Mayo have enough powerful behemoths who surge forward in waves. A guaranteed scorer like Boland would give us a different dimension.
Similar to Boland, Ryan O’Donoghue isn’t the biggest but by God does he fight for every possession. His tenacious battling won him a lot of frees and marks on Saturday and he was clinical from placed balls.
It will be interesting to see what happens as regards free-taking duties once Cillian returns to the team. Will O’Donoghue be freed from the burden of having to take big kicks every game or will O’Connor have to bide his time before resuming the mantle?
I think O’Donoghue relishes the responsibility and it is no coincidence that we have seen his best Mayo performances when on free-kicks for the last year.
Incidentally, on the topic of frees, I’m not sure I’ve ever seen a worse one than Paudie Clifford’s attempt from the 14-yard line. Why wasn’t his brother taking it?
That being said, Paudie himself would probably score that blindfolded and in his stocking feet 99 times out of 100 and Saturday’s “attempt” was probably just an aberration.
Mayo didn’t look a gift horse in the mouth though and went straight up the other end and kicked a score, thus turning a would-be four-point deficit in to a two-point game.
As always, Mayo battled valiantly until the death but we just ran-out of road. This result isn’t fatal though and based on both teams’ respective form thus far this season, Saturday could quite possibly be the first instalment of an epic Mayo-Kerry trilogy in 2022. Until we meet again…