Is no second ground a blessing or a curse to Mayo?

By Anthony Hennigan
There’s something about the atmosphere of a Saturday night beneath the floodlights.
The smell of the burger van. The illuminated fog from the nearby turf fires that hangs above the ground. The chance of a pint or three uptown afterwards. And, let’s be brutally honest, if it’s an away game and you’ve a local bed sussed, that warm, smug feeling of knowing there’s some other poor sucker, his eyelids held open by matchsticks, on a four-hour drive home through a miserable winter’s night. I’ve been that sucker. 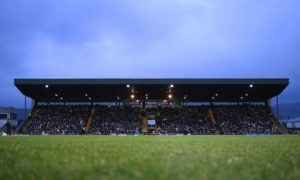 The calm before the storm: The stand at Austin Stack Park in Tralee was declared full all of 90 minutes before the throw-in of Saturday night’s Allianz Football League Division 1 match between Kerry and Mayo. Picture: Stephen McCarthy/Sportsfile

And then there’s watching from the armchair.
As hard as anyone has ever tried, it’s impossible to recreate that same match-night atmosphere in your living room. You could have a couple of quarter-pounders sizzling beyond in the kitchen I suppose, and there’s those turf-scented candles that you might send out to the Yanks at Christmas, and it’s true that more than a few homes these days have their own keg tapped out in the garage. But sat in a t-shirt not thermals, footstool to hand (if you pardon the contradiction), no warning from the gardaí that your car is about to be towed away, no queue for your toilet nor anyone trying to sell you a ticket to win a heifer or a house on your way back to your seat, to have truly experienced Tralee last Saturday night you will have to have been in Tralee.
And my God, were the Mayo supporters in Tralee.
There wasn’t a mattress to be had in the Kingdom’s capital for this top-of-the-table Division One clash between two teams who more and more people had been suggesting in the build-up were first and second seeds in this year’s race for All-Ireland honours as well.
Last Saturday night probably did little to alter anyone’s opinion.
In this season where Mayo are playing home games in nearby counties because of pitch improvement works at MacHale Park, it’s worth remembering that Austin Stack Park is not even Kerry’s primary residence. Despite its capacity of around 12,000 and the serious buzz about the place on Saturday as Mayo rolled into town, and that it’s there where the offices of Kerry County Board are located, the Tralee venue is still only second to Fitzgerald Stadium in Killarney (where more than three times the crowd can be comfortably accommodated) when it comes to where the senior footballers play their championship football.
But Kerry are just one of several counties who have a luxury that Mayo simply hasn’t, namely second or even third grounds capable of hosting major inter-county matches. In some cases, these counties, including Kerry, Donegal and Tyrone, also have a Centre of Excellence.
The Red Hands, Mayo’s opponents this weekend, tend not to play their inter-county games anywhere except Omagh but when Healy Park was deemed unplayable on account of Storm Ciara in February 2020, the County Board was able to call upon Pairc Arthur Mallon, the home of Edendork St Malachy’s, outside Dungannon, to stage that day’s NFL Division 1 clash against Kerry. Where could Mayo hope to switch such a game at that short notice?
At any notice for that matter.
Monaghan play the bulk of their home fixtures in Clones but have also brought Division 1 football to Inniskeen this season, where they took on Kerry, and to Castleblayney in 2020 where they faced neighbours Tyrone.
Not to be outdone, Donegal have also played league football in three different home venues over the past three years. MacCumhaill Park is awarded the majority of their games but Monaghan were the visitors to Fr Tierney Park in Ballyshannon in 2020 and Donegal’s final round clash with Armagh this season will go ahead in Lettrkenny’s 8,000-plus capacity O’Donnell Park.
We know the fortunate position of Cork, who can call upon Páirc Uí Chaoimh and Páirc Uí Rinn, and Galway who alternate between Tuam and Salthill, and whose hurlers will also use Ballinasloe on occasion, and although it’s an impressive feat that no fewer than five grounds have hosted Derry’s home matches in the National Football League in recent seasons, namely Celtic Park, Owenbeg (Derry GAA’s CoE), Ballinascreen, Bellaghy and Watty Graham Park in Maghera, it’s probably not fair to compare that to Mayo’s situation, given attendances for Derry’s Division 3 or 4 fixtures would hardly have threatened any records. 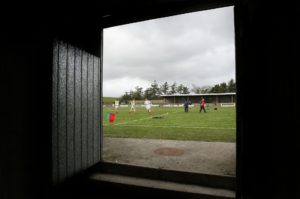 Mayo players warming up at James Stephens Park in Ballina ahead of a National Football League game there in 2009. MacHale Park in Castlebar has hosted every home game since with the exception of this year when Mayo have had to take their home games outside the county. Picture: INPHO/Cathal Noonan

Still, will the likes of Ballina or Charlestown or Crossmolina or even Ballinrobe, where Mayo played league football as recently as 2003, ever see National League action again? There’s a part of me screaming be careful what you wish for; Dublin could very well end up returning to Parnell Park to play their league games next season against the likes of Clare, Down or any two of Antrim, Limerick, Louth, Westmeath or Fermanagh who are all moving nicely in Division 3 at present. So, if grounds in Mayo other than MacHale Park one day end up able to accommodate a National League game you’d hope it’s because of their upgrading as opposed to the Mayo team’s downgrading.
But rather than any major investment in James Stephens Park, Fr O’Hara Park, St Tiernan’s Park or Flanagan Park, all of which are club-owned of course, Mayo GAA chairman Seamus Tuohy recently outlined his ambition to see two training pitches, one grass-based and one 4G-based, developed on board-controlled ground to the rear of MacHale Park. Of a more pressing concern to Mayo County Board than bringing National League action around the county is to actually have pitches upon which their teams can train. The situation this past winter has proven particularly dire.
I’ll admit though, there is a part of me thinking wouldn’t it be great if the sort of investment Seamus Tuohy is talking about (up to €2million) was pumped into an existing ground, maybe the likes of James Stephens Park where the most infrastructure is already in place, or wherever else is deemed most appropriate, so that some big games could be played in a tighter venue that generates a more raucous atmosphere than a third-full ever MacHale Park can, as opposed to developing a couple of back pitches that will never be able to host a crowd of any significance? Or is the second ‘county ground’ something that could be pursued in addition to Tuohy’s plans regardless?
The enforced relocation of last season’s men’s and women’s senior football finals, and Knockmore’s subsequent run in the Connacht Club championship, certainly seemed to whet an appetite among many GAA supporters in the county.
But when there’s talk about extending the debt owed on MacHale Park over another 50-years, it’s an easy argument to make that Mayo should count its blessings it hasn’t a second stadium, along the scale of Tralee or Tuam, to have to upkeep as well.
Are we any worse off without it? This season perhaps. But in the long run?