24 clubs are competing in the four divisions of the Mayo Football League this season, some with B teams, some with C teams but there are quite a few clubs dotted around the county missing from the picture with their A team not competing. 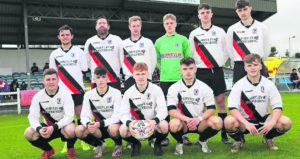 The Iorras Aontaithe team who lost 2-1 to Westport United in last October’s Tuohy Cup final in Solar 21 Park. Six months later the club has no first team in the league this year due to a lack of players. Picture: Michael Donnelly

As is well known by now, Iorras Aontaithe and Snugboro United are not competing this season, two teams who would have been in the second tier, fighting for promotion to the top table where both have played within the past five years. Bangor Hibs are also a relatively recent casualty, stepping away from proceedings in 2020.
It is not all doom and gloom. These three clubs still cater to the underage, and for Iorras and Snugboro, the overage with both still trucking away in Masters Football. But it could be tough to convince a young fella who is aged 16-18 that the sport and indeed the club is worth sticking with if it looks as though his road is coming to an end.
Both Erris and Snugboro felt they were in a position where they did not have enough players who were willing to commit for the season ahead and that might lead one to think apathy is the issue.
But if disinterest was the case, why are players from both clubs now scattering to the wind to other clubs in their relative locality? A quote from an 80s classic comes to mind. “If you have a problem… if no one else can help… and if you can find them… maybe you can hire… The Erris United A-Team.”

Economic factors and the GAA

There are a number of different reasons why clubs are struggling to make up the numbers, particularly with players between the ages of 21 to 28. It isn’t a problem exclusive to just rural clubs. Snugboro are rural in the sense that you’d be quicker finding their pitch using your wits than Google Maps but they are only a stone’s throw away from Castlebar, if you’re good at throwing stones.
The first and most broadly reaching issue that is currently affecting every level of society right now is the cost of living. For the lads still in college or living away from home for work, weekend jobs are a lifeblood right now. The rental market in Ireland has progressed beyond the point of parody and for those who dare to own a car, you’d almost want a Credit Union loan to fill the tank with fuel these days. If you have college and living expenses to worry about, you can’t refuse an extra shift at work to go and play football.
Another obvious factor is the pull of other sports, specifically the GAA. Let’s be real here, the standoff between GAA and soccer clubs in this county for player availability is like having only two letters on your last guess in Wordle; it’s tense. Especially at a time when GAA teams in rural areas are also unravelling for various reasons, including the general state of economic play. In the North Mayo area, other clubs are like Lacken showed themselves to be last summer— close to the brink. 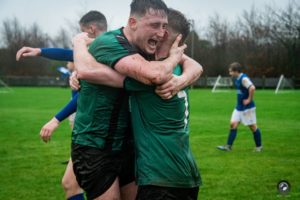 Liam Irwin and Paddy Bourke celebrate Ballyheane’s league title last season. Irwin was an All-Ireland minor and U21 winner with Mayo in 2013 and 2016. Picture: Kathleen Conway

While greater cooperation and communication across codes seem like a quick and easy fix for these diplomacy issues, it is not that easy and it is why this conversation is ever-ongoing. Quite simply, if the star corner-forward who moonlights as David Ginola for the soccer club down the road breaks his ankle during the Ginola routine a month before the club championship, it tends to muddy the waters. This is sometimes the case no matter the circumstance and context of the injury. He could have slipped on the path outside the shop where he was stocking up on hair gel and Tommy Hilfiger clothing and it would still cause animosity between both sides of the fence.
The implication and risks of playing more than one sport creates an already sour atmosphere and the culture of this county means GAA is always going to be numero uno. Perhaps this is something that would be balanced out with a Mayo team in the League of Ireland but that is another column for another week.
The decline of rural sports clubs is a well-documented, often-discussed issue that really has no quick fix but really, how do you actually stop coastal erosion? It ebbs and flows, chipping away in the background and is not considered a problem until it is a problem and that is where we are at right now.

At the 2022 League’s launch night earlier this month, I got speaking to representatives from a few clubs to get their views.
Ballyglass chairman John Boyle said it was concerning to see what has happened to clubs like Iorras Aontaithe, Bangor Hibs and Snugboro over the last few years. He said the important thing for these clubs to now focus on is developing players through their youth systems and look down the line towards re-entering the Mayo League.
“It is a concern and it is hard to compete competitively with the clubs from urban areas. I would say to any club to just stick with it and really focus on your youth.
“Balla Secondary School are in an FAI All-Ireland final now and no less than nine of the players on that team are from Ballyglass club. It goes to show you can do it, you can rebuild but it is all about the youth. You have to keep young players coming through.”
Glenhest Rovers are one of the county’s most prominent rural clubs. Nestled down the backroads of the R312, they are as rural as it gets. Their captain Chris Rowland said a switch to a winter season could be a possible solution.
“You can make no bones about it, it is getting harder and harder for soccer clubs in general, not just rural clubs at the moment. Personally, I don’t know if the summer season suits soccer at the moment. We’re going up against the most popular sport in the county in GAA and trying to meet them head-to-head and it is certainly not easy for rural clubs,” said Chris.
“I would be in favour of switching to a winter season. Although the pitches would be wetter and the weather would be worse, you’ll have a far greater selection of players and that will strengthen rural clubs and soccer in the county in general.”
Perhaps rural clubs can take some heart in the happenings at Ballinrobe Town in the past twelve months. While not a rural club, they were once where Erris and Snugboro were at. Dropped out of the League due to what looked like a lack of enthusiasm but now they are back and have lit up the Mayo League once more, winning promotion from League Two and the McDonnell Cup to boot. 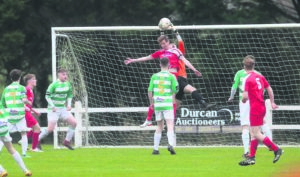 Jack Jensen, Castlebar Celtic ‘B’ team goalkeeper, is challenged by Ballinrobe Town’s JP O’Gorman in the McDonnell Cup final played last December at Solar 21 Park, Castlebar. Ballinrobe bucked the trend by returning to the Mayo League in 2021 when Iorras Aontaithe, Snugboro United and before them, Bangor Hibs, have all had to withdraw due to a lack of players. Picture: Michael Donnelly

Club captain JP O’Gorman, who played a pivotal role in the Ballinrobe phoenix rising from the ashes, said a lot of lessons have been learned over the last couple of years.
“The few years out have been very tough for Ballinrobe to take but it’s been a learning curve and things are being done right now. There’s a good management team in place and some great training sessions every week, we’re in a very good place.”
Ballinrobe coach Pat O’Sullivan said it has been a massive boost for the club and the surrounding area.
“There is a great vibe around the place. It is so good to see Junior soccer back in the Green. It’s huge for the club and massive for the whole South Mayo area.”
Here is hoping it will be sooner rather than later that we see the likes of Snugboro, Iorras, Bangor and even, looking further back, the likes of Urlaur United back in contention in the Mayo Football League.