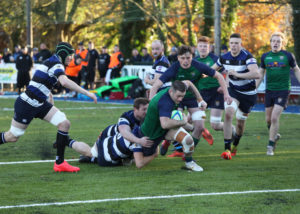 Conor Mason’s power near the line has proved decisive all season and Ballina will be hoping he can work some of his magic again on St Patrick’s Day. 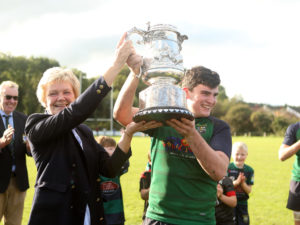 Ballina RFC will go for a historical double today (Thursday) when they look to add the Connacht Senior Cup to the Senior League title they won earlier in the season.
Buccaneers will be looking to spoil the party when the sides clash in The Sportsground at 1.30pm before what is expected to be a large attendance.
Ballina will be looking to win their first title since 1979 — when they defeated Athlone in the decider — and they will bring a huge crowd to Galway for the big game this St Patrick’s Day.
The Moysiders have won the cup just twice in the competition’s 126-year history — 1979 and 1951 — and will be endeavouring to add another victory to their roll of honour when they run out at HQ against the Buccaneers boys.
Both sides play All Ireland League rugby, with Buccs currently sitting in third place in Division 2A and Ballina fighting hard in the division below.
The Athlone men will come into the game as favourites, but Ballina are the reigning Connacht Senior League champions and will be looking for a famous win on the big stage.
Craig Stewart and Aiden McNulty will be hoping to pick from a fully-fit squad for the big game, and team captain Luke Sweeney will lead out a team showing very good recent league form.
The Mayo men will be looking to players such as Conor Mason for forward power, while Calum Quinn, Alex Corduff, and the excellent Mickey Murphy will be hoping to do the business behind the scrum.
Meanwhile, Ballinrobe RFC and Westport RFC have advanced to the semi-finals (March 27) of the Connacht Junior Cup after impressive victories last Sunday.
Ballinrobe defeated Monivea RFC 17-3 away at the Castlegrounds. Next up, they will travel to Dubarry Park to take on Buccaneers RFC in the semi-finals.
Westport overcame Galwegians RFC by a 38-13 scoreline at home as they ran in five tries in difficult conditions. They can now look forward to travelling to Monastry Field as they face Connemara RFC in semi-finals.