By Anthony Hennigan
It doesn’t take a whole pile of research to know for sure that there’s not a team currently as successful at playing Kerry in Kerry than Mayo. 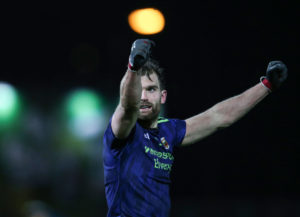 Aidan O’Shea celebrates at the final whistle after Mayo’s win in Tralee back in 2019. Picture: INPHO/Cathal Noonan

The Green and Red have made five consecutive visits to the Kingdom in the National Football League without experiencing a defeat. Throw-in their win over Kerry in the 2019 Division 1 final, and their draw and subsequent victory when playing them in the 2017 All-Ireland Championship semi-final, all those games taking place in Croke Park, and it’s quite the annoyance that Mayo have become to a county that in the 1990s and early 2000s in particular, had become accustomed to inflicting so much hardship upon us.
Yes, the Munster men have had their moments over Mayo recently, namely a Super 8s win in Killarney in the summer of ’19 and the narrowest of league wins in Castlebar in 2020, but neither result was a launchpad to anything too spectacular by Kerry; the first year they lost an All-Ireland replay having played over half the drawn game against Dublin with an extra player and the following year they suffered a humiliating Munster semi-final defeat to Cork.
Indeed it’s Mayo who visit Austin Stack Park this Saturday night (7.30pm) as back-to-back All-Ireland finalists, albeit they like Kerry in the year directly before them were unable either time to return west with Sam.
But even at this stage of the season, weeks out from the start of championship, it’s hard not to envisage at least one of these two teams reaching the last Sunday in August as contenders to Tyrone’s throne. It’s why you can expect every bit as sizable a crowd in Tralee for this game as when more than 10,000 packed it out for the same fixture three years ago.
On that occasion, Kerry were attempting to win a sixth straight league game for the first time in 54 years but Mayo spoiled the party by winning 1-10 to 0-11 in horrendous conditions. And just like then, there exists the very real possibility – by virtue of both sides’ identical unbeaten records after four rounds of this year’s campaign – that the pair could find themselves meeting again just a few weeks further down the road, in the NFL Division 1 final.
Leaving aside the run of results that Mayo teams have strung together over Kerry in the past decade or so, whether that it be in Tralee or Killarney (you have to go as far back as 2009 and to an era of Ciaran Conroy, Liam O’Malley, Pat Harte, Ronan McGarrity et al, for the last time the hosts have made home advantage count against Mayo in a Division 1 fixture), it’s easy to understand why the 2022 Mayo model will journey south with a confidence that is fuelled by more than just modern history.
The nature of their come-from-behind wins against Armagh and Monaghan, in between which was their quite controlled five points victory over Dublin in Croke Park, coupled with an opening-round draw against a Donegal team that had four McKenna Cup matches already under its belt, but who couldn’t defend a five points lead after Mayo were reduced to fourteen players, has James Horan’s team sitting pretty, devoid of the pressure of relegation and free to continue exploring the depth of its squad, should the manager choose to do so.
Six of the Mayo players to feature in Mayo’s last visit to Tralee in 2019 are now all retired, and it would be another year before the likes of Oisin Mullin, Ryan O’Donoghue, Eoghan McLaughlin or Tommy Conroy muscled their way into the squad, so the Mayo team that takes to the field this Saturday will be quite changed to that of three years ago. As few as four players who started that night – Michael Plunkett, Stephen Coen, Matthew Ruane (who scored the goal) and Diarmuid O’Connor – started Mayo’s most recent outing against Armagh. Seven of Kerry’s starters that night were on the pitch for their throw-in against Donegal last Sunday week.
How the Mayo team has been selected to line out this Saturday night hints at how important James Horan sees that his team produces a strong performance. Paddy Durcan and Padraig O’Hora, having started on the bench against Armagh, have both been named in defence in place of Rory Brickenden and Sam Callinan. Aidan O’Shea, the only current player who featured in Mayo’s last league defeat in Kerry thirteen years ago, also gets to start his first game of the campaign, after some sparking second-half cameos. His Breaffy club-mate Rob Hennelly returns between the sticks as well, and the experience of Fergal Boland has been added to the attack where Jack Carney, a goal-getter against Dublin, is given another chance to impress. 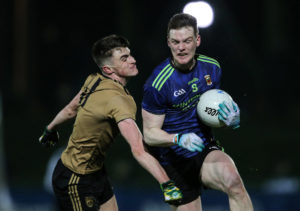 Sean O’Shea, seen tackling Matthew Ruane of Mayo in the 2019 clash, will miss this Saturday’s game because of injury. Picture: INPHO/Cathal Noonan

The A-games of Diarmuid O’Connor, Mattie Ruane, Ryan O’Donoghue, Lee Keegan and Paddy Durcan would give Mayo a realistic chance of extending the county’s remarkable run in Kerry but a method of how to curtail the supply of ball to David Clifford, which will involve getting up the noses of his brother Paudie Clifford and midfielder Diarmuid O’Connor in particular, is going to have to be found. The absence of Sean O’Shea, however, who has suffered a toe injury, is a major plus to Mayo.
Kerry have scored more and conceded less than any other team in the division, with a noticeable tightening up in their defence where Tadhg Morley, Brian Ó Beaglaioch and Tom O’Sullivan each now have about five years’ experience to add to that of Paul Murphy, an All-Ireland winner in his breakthrough year of 2014 – but the latter is also sidelined for the Kingdom, with the much-less experienced Dylan Casey and Graham O’Sullivan included among the backs for Saturday night’s clash.
Jack O’Connor’s side has improved game-on-game since coughing up an opening-round draw in Kildare and look certain to offer Mayo their stiffest test yet. But Mayo may well offer Kerry just the same.