By Aonghus Ó Maicín
It feels odd, exceedingly odd. The midway point of the 2022 league season has been reached and Mayo are looking down upon their rivals from the top of the Division One table. This isn’t the way Mayo usually go about their business when the spring ground has yet to harden. 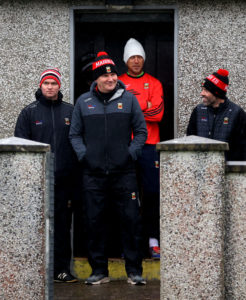 James Horan with his selectors Ciarán McDonald and James Burke. The Mayo manager has overseen an unbeaten four-game start to the Allianz Football League despite it coming on the back of perhaps the most disappointing of all All-Ireland SFC final losses. Picture: INPHO/James Crombie

The Mayo way of operating usually involves dealing with the soul-punching hangover brought about by the previous season’s championship exit, followed by a down-to-the-wire fight on the last day of the spring campaign. They’ve never taken pleasure in simple methods. Not in the summer, and certainly not in the spring.
Mayo fans have even learned to adapt their match day kits to deal with the side’s penchant for engaging in jousts at the bottom of the table. No Mayo fan now dares set foot outside their home on the final day of the campaign without the sandwiches, tea and abacus tucked in neatly under the arm.
But here Mayo are — sitting pretty on seven points after four games and without a loss on their record, representing the county’s best start in Division One since the 2006 season.
Such a promising start to the year featured in nobody’s expectations of last year’s All-Ireland finalists, especially after experiencing arguably the most gut-wrenching of all their final defeats last September. Nobody truly knew where Mayo would be by the middle of March, though it was safely assumed that they were unlikely to be heading to Tralee for a top of the table tussle against a Kerry side reenergised under Jack O’Connor.
Mayo didn’t even start the league reasonably well, the opening 35 minutes of their campaign producing only three scores on a dank January afternoon in Sligo. But from the moment they exited the Markievicz Park dressing room after half-time, they’ve been playing with a more urgent purpose in their game.
There is a certain irony to their campaign thus far. For years there have been calls for new talent to be blooded in the league, only for looming relegation battles to draw successive managers back to the tried and tested within their respective panels. But despite having only returned from a sojourn in Division Two last season, Horan hasn’t been unwilling to experiment. In fact he seems to be more willing than ever to unleash untapped talent against the best sides the country has to offer.
The week off has therefore served as a much welcome period of reflection. Where does the county go from here? What are its ambitions? Is it time to finally get much-needed football into the legs of the old reliables at the expense of emerging talent?
Suddenly making a league final has become a real possibility though that’s a prospect that has been met with a degree of hesitancy, as per multiple conversations this correspondent has had with members of the Mayo faithful this past week. It’s felt that a final has the potential to inject a sense of uncontrollable excitement back into the county at a time when some self-control is required ahead of the updated championship kicking off.
There is of course merit to the argument, though the idea of Mayo fans wanting to spurn opportunities to win silverware will never fail to be at least a little absurd.

You really only figure out what Mayo are about in the last five minutes of a game. They bring a manic energy to proceedings that can be mightily unsettling, a vibe that wouldn’t look out of place at four in the morning on an Ibiza beach.

Recovering from a league final in time to meet a Galway side thriving in the environs of Division Two is also a concern, and the Tribesmen will no doubt be itching to repair the battering inflicted upon their spirits in Croke Park last summer.
But there can be no drifting beyond a date in a subarctic Austin Stack Park on Saturday night for now. For as well as Mayo have started the league, Kerry are the team everybody is talking about, the county that were propelled into All-Ireland favouritism following Dublin’s astonishing dip in form, the outfit Jack O’Connor has singing with some of the vigour of his previous Kerry sides.
But Kerry have experienced this hype in recent years without ever delivering upon it during the summer months. And while the credentials of Kerry’s attack, spearheaded by the mercuriality of David Clifford, have been well documented, Mayo will probably bring something into Saturday night’s encounter that they have yet to experience this year. Then again, nothing can be taken for granted when it comes to Mayo.
You really only figure out what Mayo are about in the last five minutes of a game. They bring a manic energy to proceedings that can be mightily unsettling, a vibe that wouldn’t look out of place at four in the morning on an Ibiza beach. Armagh witnessed this maelstrom first-hand two weeks ago. The Ulster men had Mayo where they wanted them for large parts of the game, until Mayo finally stoked the furnace. 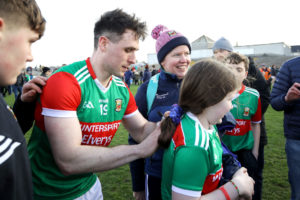 The lead-up to Paddy Durcan’s game-clinching score offers a snapshot of the relentless punch Mayo brings to their game when it matters. After they turned the ball over and burst forward, eight Mayo players charged into Armagh’s half like a battalion of soldiers gambolling towards the enemy’s trenches.
Only four Armagh men had the wherewithal to follow them, visibly losing a little more heart with every step they took. Two more Mayo players were making runs into space further up ahead, with the two remaining Armagh men at the back left looking like a couple of hapless head chefs who had just watched their teams take to the picket line mid-service.
That’s what Mayo do. They draw teams into a false sense of security and pounce.
It was evident in their second-half display against Donegal, and when they finally brought down the Dublin empire it should have come as no surprise that they did so by overcoming a significant deficit. Other teams, in hindsight, were probably also capable of beating Dublin last year, but is there any other side in the country capable of doing it in the manner Mayo did?
Kerry are deserving favourites heading into this weekend’s game by virtue of their performances over the last couple of weeks, though O’Connor is too long in the tooth not to be keenly aware of Mayo’s tendency to forget lines from the script.
With a victory over Dublin seemingly not something to be getting too carried away with at the moment, finding a way to beat Mayo has become the Kerry manager’s greatest test since returning to his own county’s dugout for a third time.
For Mayo it’s just another chance to keep their current momentum rolling. Horan, like everyone else, knows what his side are about by now. As is always the case with the cursed Westerners, you can only buckle up and hold on tight.