Home and away returns as pandemic gets the boot 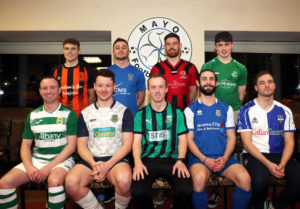 Players from nine of the ten clubs who will be kicking off their 2022 Mayo Super League campaigns this Sunday.

By Paul O’Malley
The Mayo League’s 2022 season kicks off this weekend with four divisions in the county this year.
The League committee has opted to return to the pre-Covid system of each team playing one another home and away. For the Super League, this will mean a total of 18 games for the 10 teams in the division. For the Premier League, this will mean a total of 16 games for the nine teams that will compete following the late withdrawal of Snugboro United. Iorras Aontaithe had already dropped out with Kiltimagh/Knock United’s ‘B’ team coming up to take their place.
In League One, eight teams will play 16 games following the withdrawal of Ballina Town ‘B’ last week. Their withdrawal has meant that fixtures will now be redrawn and the league will start on the later date of March 27. In League Two, 10 teams will play 18 games while League Three, which was won by Manulla ‘C’ in its inaugural year, has been discontinued.
Two teams will be relegated from the Super League. Two teams will be promoted and one relegated from the Premier League. Two teams will be promoted from League One and two relegated while three teams will be promoted from League Two.
Defending Super League champions Ballyheane begin their title defence at home to Claremorris. The two teams faced off twice in the league last year with Ballyheane emerging victorious on both occasions by scorelines of 5-1 and 5-0. They will find themselves coming up against a Claremorris side bolstered by the addition of Joe Slevin from Swinford and former Derby County youth team player Paul Lawless. Ballyheane have retained much of the same team although they have lost John Vahey, who has joined Sligo Rovers. His replacement is Tommy Scahill who looked very impressive for Glenhest Rovers before spending time with the Longford Town U19s.
Newly promoted Premier League champions S&F United will visit Castlebar Celtic on the opening day of the season. Diarmuid Ahearne and Oran Groarke have joined the Hoops while S&F have retained much the same squad as last year. 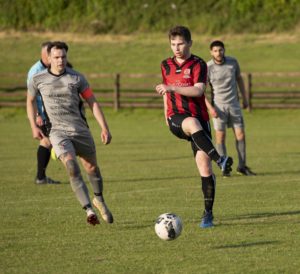 Also back in the Super League are Kiltimagh/Knock United who welcome Manulla in Round 1. James McGrath, Adam Byrne and Conor Byrne have joined up with Kiltimagh/Knock while Manulla have picked up a trio of Swinford players: Ryan Convey, Richie Dalton and TJ Groarke.
Meanwhile, Glenhest Rovers welcome Westport United to the Strand for their opening fixture. Glenhest are hoping to bring in a few signings before the season starts while United are currently without a manager following the departure of Mickey Feeney. David Hoban has taken interim charge.
Ballina Town have made a wealth of new additions in the offseason. Matt Hamilton, formerly of Ballyglass, has joined up to give Ballina extra options in defence while James Doherty, well-known for his exploits across the sporting codes with Ballina Stephenites has signed up for the year. Former Galway United U19 Oleg Vysochan has joined and so too has Luke O’Reilly from Iorras Aontaithe.
They entertain Ballyhaunis Town on the opening day of the season, who have brought in Sean Burke from Cloonfad United. After starting last season with Westport, Gary Higgins is again registered to play with Ballyhaunis Town.
In the Premier League, Fahy Rovers open their season with the visit of Swinford who were relegated from the Super League last season. Westport United ‘B’ welcome Moy Villa to United Park for what is Mick Duffy’s first game in charge of the Attymass men. Killala entertain Crossmolina in a North Mayo derby while Conn Rangers play Kiltimagh/Knock ‘B’ at home. The odd team out, Ballyglass, will have the benefit of an extra week to suss out their opponents. Their season starts at home to Fahy the weekend after next.
League One will start on the weekend of March 27 and will be contested by Achill Rovers, Ballinrobe Town, Conn Rangers ‘B’, Hollister, Kilmore, Manulla ‘B’, Newport/Mulranny Wanderers and Westport United ‘C’. Fixtures are currently being redrawn for this division.
League Two kicks off with Ballyvary Blue Bombers up against Partry Athletic. Conn Rangers ‘C’ host Castlebar Celtic ‘B’ while Ballyglass ‘B’ take on the newly formed Fahy Rovers ‘B’ side. Also entering the league for the first time is Killala ‘B’, who travel to face Crossmolina ‘B’ in their opening game. The final game in the division will see Claremorris ‘B’ face off against Ballyheane ‘B’.