Why Mayo must keep building and riding the wave of momentum 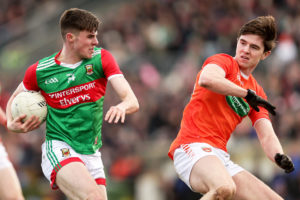 While there are always things to work on, James Horan will be very pleased with his team’s progress thus far this year.
Sitting atop of Division 1 with Kerry is a good place to be. Being virtually safe allows Mayo to enjoy this two-week hiatus in the league without the dread of a looming relegation battle.
It also allows Mayo to really target the Kerry game in Tralee next weekend and lay down a marker to the whole country about who the form team in Ireland is right now.
Fielding experimental sides can lead to unpredictable and inconsistent results but Mayo have made light of that theory in recent weeks.
Horan has given game time to 29 players and after four rounds of an ultra-competitive league will have a decent read on most of his charges and should be getting a clearer picture of who he can rely on for the Galway championship game in just over six weeks’ time.
For all the talk of experimentation and blooding new players, however, it was some of the old reliables who stemmed the tide and steered Mayo towards victory in a hugely challenging encounter in Hyde Park last Sunday. Paddy Durcan came on and kicked his obligatory scores.
He really is one of Mayo’s most potent offensive options. Padraig O’Hora wired into tackles and made a few critical turnovers when the game was in the melting pot.
Oisín Mullin’s move back into the full-back line helped snuff out the considerable threat of Armagh’s totem Rían O’Neill.
Like in Croke Park the weekend before, Kevin McLoughlin and Aidan O’Shea had very positive impacts from the bench. We are getting to the stage now where it looks like the experienced pair will be used as impact subs each day out.
I wouldn’t be against the notion if we continue to see them coming on to affect games in such a productive manner as they have done of late.
Although every player wants to start, I actually think that both of the lads are enjoying their new roles.
After years of being targeted by opposition teams and coming in for special treatment by cynical, well-prepared opponents, being introduced when the game is looser and less structured seems to have given the seasoned duo a new lease of life.
In many ways, Sunday’s game was a typical never-make-it-easy Mayo affair. It had all the features of a standard Mayo GAA melodrama – the concession of a very sloppy early goal, the bleak prognosis at half-time, the rip-roaring comeback fuelled by the Mayo supporters’ roars and the surge of momentum which saw five unanswered points in the last ten minutes. What was different and most encouraging, though, is that Mayo found a way to win against a style of play that we have found difficult to overcome in the past.
It is no secret that we will go toe-to-toe with anyone in an end-to-end game of flowing football.
Where we have struggled historically is when teams sit deep with everyone behind the ball and allow Mayo to have possession i.e. the Northern style.
This requires patience, tact and the ability to unpick locks – skills which are all incompatible with Mayo’s gung-ho make-up.
That is the beauty of competing in Division 1 though, you come up against a variety of playing styles and tactics which properly hardens you for championship.
Last year’s spell in the second tier was fun but Division 2 is a much easier ride which doesn’t necessarily ready you for the latter stages of the All-Ireland series. 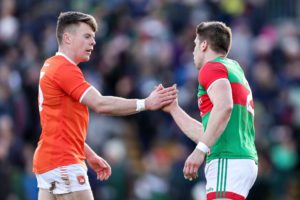 Armagh’s goal in the opening move of the game was a godsend for them.
Against a strong breeze, scores into Hyde Park’s graveyard end were going to be hard to come by.
That major, however, gave the Orchard men a perfect foothold in the game which allowed them to play it on their terms in the first half.
I felt sorry for Rory Byrne who was obviously caught cold having just been given the starting nod moments before throw-in due to Robbie Hennelly’s injury in the warm-up.
He atoned for that mistake towards the end when dealing expertly with a tricky ball which was launched into his square.
To a degree, Hennelly’s injury may be a blessing as Byrne will gain a lot from Sunday’s invaluable exposure to high stakes inter-county football.
If called upon later in the summer, he will be all the better for Sunday’s experience.
In the first-half Mayo looked a bit muddled in their thinking. Playing with the wind, they probably wanted to go long, and knew it was the right thing to do, but Armagh were giving Mayo easy possession by conceding Byrne’s short kickouts. When Mayo did eventually reach Armagh’s half they were met with an orange wall and a slow, frustrating and low-scoring first-half ensued.
Mayo also didn’t take their chances when they did fashion them and their shooting lacked conviction and confidence when striking at the posts with a wind at their backs.
Patience is a virtue, however, and Mayo’s performance in the last quarter was superb. Playing into the wind in that second-half definitely suited Mayo’s skillset.
I feel like I have seen the last 10 minutes of that match from this Mayo team a hundred times before. It was a tour de force in intensity, power and energy. Mayo squeezed up and rumbled all of Ethan Rafferty’s short kick-outs.
Aiden Orme transformed into a turnover machine. Mayo’s finishing became precise and assured. From a position of relative authority heading into the final stretch, Armagh were left spinning after a Mayo blitz.
For a team renowned for their meticulous preparation and analysis, it was a surprise to see a wind-assisted Armagh continuously go short with their kick-outs late on as Mayo repeatedly gobbled them up.
It reminded me so much of Donegal’s inability to carry the ball out of their defence in the dying moments of Round 1 in Markievicz Park.
When Mayo’s press is coordinated and on song, opposing teams seem to become afflicted with ‘The Foidín Mara’ and lose all their bearings and sense of space and time.
Apart from the very healthy league position, Diarmuid O’Connor’s return to top form is the big bonus of the campaign for James Horan and his management team. 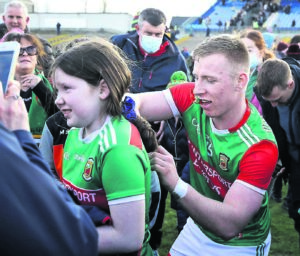 He has been pushed hard by Robbie Hennelly but he has been Mayo’s player of the league to date.
It seems the half-forward line on this Mayo team will never be set in stone and always quite interchangeable but if you have one player in the line like O’Connor who you can always hang your hat on, then you can mix and match and build the rest of the line around him.
Securing Division 1 status for another season was vital for this Mayo team but now is the time to kick-on and try and win the competition.
I have seen some supporters bemoan the fact that this year’s NFL Final is only weeks before the huge Connacht Championship clash versus Galway.
They claim that appearing in the Croker decider could impair preparations for the Galway game. I don’t subscribe to this view at all.
The league final is a full two weeks before Easter Sunday’s Connacht quarter-final. Two weeks is ample and ideal preparation time before a big match.
Trust me, players would much prefer to be preparing for a showpiece decider in Croke Park than partaking in a heavy-ish block of running that week or an A v B damp squib in some behind-closed-doors venue.
The reality is Galway will probably also be playing in the Division 2 decider on the same day.
What better way to psychologically assert our authority over our nearest and dearest rivals than claiming the Division 1 trophy while they compete for a consolation prize. In the coming weeks, it is important that Mayo keep building and riding the wave of momentum. No team feeds on it more.