Mr Consistent still inspiring the rise of the Rovers

By Keith O’Dwyer
Now going into his ninth season in his second spell with Sligo Rovers, Ballina’s David Cawley has experienced it all with the club, from winning the league in Rovers’ glory days to battling relegation from the top division a few short seasons later. 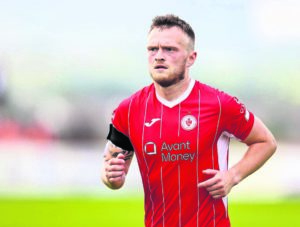 Ballina man David Cawley is now in his ninth season with Sligo Rovers, in his second spell with the club. Picture: INPHO/Tommy Dickson

The last couple of seasons have seen the Bit o’Red get back on track, however, having qualified for Europe in each of the last two league campaigns. Even if last season was a bit of a rollercoaster in terms of form, Cawley feels that ultimately Rovers finished where they wanted to.
“Yeah exactly, it had everything with some highs and lows but looking at it overall, look at how far we have come,” said the 30-year-old.
“We qualified for Europe in back-to-back seasons which is a massive achievement and hasn’t happened too often for this club. We were out of Europe for so long and it is where you want to be, it raises the profile of the club, gives you the chance to test yourself against better players and also helps the club attract better players.
“The season itself was a bit strange but it is never plain sailing for any club and all sides go through a slump at some stage; it was just unfortunate that ours happened right in the middle of the season. We hit our bad patch and it put us out of contention for the league and we went out of the Europa Conference League and the FAI Cup at the first hurdle which was tough.
“But we finished strong and in the end finished where we wanted to be which was in the European places. We were fourth in 2020 and then third last season so that is progress and we want to build on that now and continue to progress and see if we can challenge for the league and finish first.”
Rovers began that mission on the right note last Friday night, earning an impressive 2-1 win away to St Patrick’s Athletic in Richmond Park with goals from Colm Horgan and new signing Aidan Keena. Cawley came in off the bench in the second period.
Of course, success will always attract attention and with Rovers producing the goods on the pitch in the last couple of seasons, it meant that some of their most important players have been snapped up by bigger clubs. Young starlet Johnny Kenny signed for Celtic in the off-season while John Mahon went to St Johnstone. Cawley feels that, in both instances, losing the players was a blow for the club but that they had earned their move.
“Losing the two lads is a big blow and they will be hard to replace, but it does highlight the great work that is being done by the coaches at our academy,” he offered.
“For the lads, it was a big chance and an opportunity that they couldn’t turn down. No player would, as you want to have that chance to test yourself across the water. For Johnny moving to Celtic must be a dream move and one that he would have been thinking about when he started out and to be fair he has earned it. 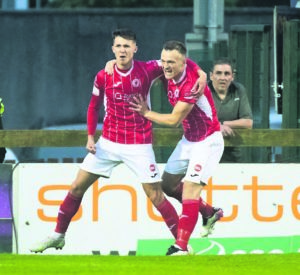 David Cawley congratulates Johnny Kenny after the youngster scored against St Pat’s last year. Kenny and John Mahon have moved from Sligo to the Scottish Premier League in the off-season. Picture: INPHO/Evan Logan

“When you think that last season was his first full one with the first team and think of how well he did, it’s no surprise that he was snapped up. He scored goals, gave us great energy up top and never stopped running. I would be hopeful of seeing his progress onwards.
“John Mahon then has such a mature head on him for someone so young and he has been brilliant for us ever since he broke into the first team in 2018 and like Johnny, has rightly earned his move. It will be interesting now to see the two of them come up against each other in the SPL next season. It is a blow but very much earned for the two lads.”
Cawley feels that Kenny and Mahon moving onto the Scottish Premier League highlights the great work that is being done at the Rovers academy and also shows the other young players in the squad that Rovers can provide them with the chance to progress in their career.
“Fair play to the academy coaches and the work that they do. The likes of these moves happening for Johnny and John can be a real eye-opener for the younger players, showing that if they can get in the first team and do well then the bigger clubs will come calling,” said Cawley, who himself had a spell with Ipswich as a teenager before returning to have a long career in the League of Ireland.
“That in turn can only benefit the club in the long run financially as it will bring in transfer fees and also build up the club’s reputation as a place where young players will want to sign. If you get a reputation as a nursery for good young talent and start to continually bring them through then that can only be positive for the club in the long run.”

Another encouraging aspect for Cawley is the continuing emergence of young talent from Mayo coming through the ranks, with Westport duo Cillian Heaney and Conor Walsh both on the verge of breaking into the Sligo first team this season.
“It’s great when you look all around the academy and under-age sides and see more and more young lads from Mayo coming in and getting involved,” he said.
“They’re all good lads as well and are all willing to learn and work hard and are not afraid to push themselves forward. They are itching for the chance to break into the first team squad which is great to see.
“That hunger is so important. Take Cillian Heaney and the pre-season friendly against Athlone when he scored a couple of goals and then we got a penalty he wanted to take it and didn’t shy away. Then you have Conor Walsh – I can’t believe how young he is and how good he is for his age. He is in full-time with us now and is developing really well and is very much one for the future.”
Looking towards the new season, Cawley wants the club to build on the progress of the last couple of years to push on and compete for major honours, and wants to try to play as big a part as he can. 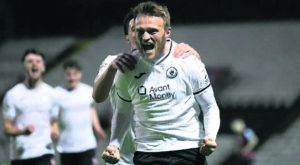 “For the club, we have to make sure we are consistent and build on the progress of the past couple of seasons and keep ourselves up there with the pack at the top and be competing for honours.
“We have to push on harder from last year and do better in the FAI Cup and in Europe. We let ourselves down in those competitions last season and need to get through a couple of rounds or even get to the final; it’s been a while and some of the best moments in my career were those day outs in the Aviva.
“For myself this has been the first time in a while that I had a full pre-season and feel fit and well and haven’t been carrying a knock. I want to try and play as many games as I can and make sure that when I am called upon that I give my all for the team and help the club push on.”
This Saturday night in the Showgrounds, Rovers face Dundalk in their first home game of the season, in what Cawley feels will be a tough game but one that Rovers can win to build on the victory over Pat’s.
“You never have an easy game against Dundalk even if they are a little bit of an unknown quantity this season. They don’t just go out and sign any player for the sake of it and always look to bring in quality signings. They have lost a couple of their best players to Derry but have looked to replace them,” he offered.
“And in Stephen O’Donnell, they have a manager who knows the club, he has played for them and will want to have them back competing at the top. So look, it won’t be easy but with it being a home game you would be hoping that will work to our advantage and that we will come out with a good result.”