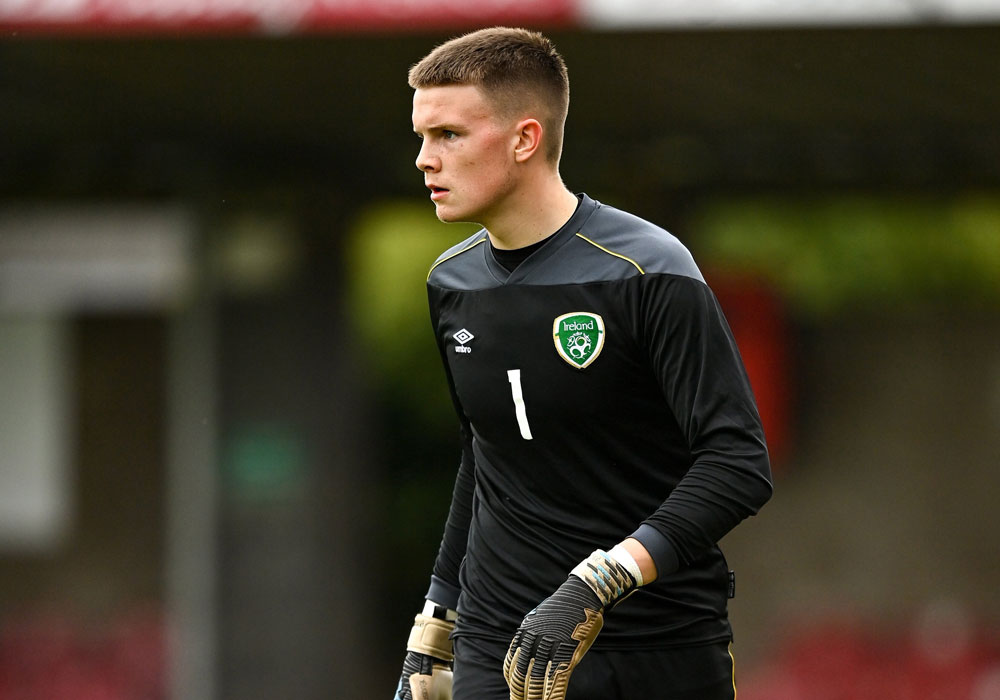 Conor Walsh in action for the Republic of Ireland under-17s late last year.

He may be only 16 – although he will turn 17 next month – but young goalkeeper Conor Walsh is already capturing plenty of attention as a result of his performances with the Republic of Ireland under-17’s and Sligo Rovers under-19’s.

The Westport native had long been on the radar of Rovers before he was asked to sign after starring for the Mayo League in the Kennedy Cup.

“I played all of my youth football with Westport United and then played with the Mayo League as well,” explained Walsh this week. “It was through playing with Mayo that I came to the attention of Sligo Rovers. When I was playing at the Kennedy Cup, Conor O’Grady from the Rovers academy was talking to my mother and he invited me to the trials for the under-15’s, but they had been watching me before that. I went to the trials did well and was asked to sign.

“I did know of Rovers but wasn’t a supporter and to me, the interest came out of nowhere and I was delighted to make the step up. It helped as well that there were a few lads from Mayo already at the club. Lads I knew from playing with and against and that helped me to settle in. It’s the same with the first-team squad in that you have David Cawley, Darren Collins and Cillian Heaney there and they look out for the younger lads coming through,” he continued.

Walsh has impressed the coaches at Rovers since joining the club and he was offered his first professional contract last season. He has since moved full-time to Sligo, which was difficult at first, but he is settling in now.

“The club have been happy with how I progressed and then last August they met with me and my family and offered me a two-year professional contract which was a huge honour for me,” said Walsh. “It did involve a lot of change as I had to move to Sligo and away from my family, I’m staying with a host family in Sligo now — Damien and Mairead Grimes — and they are great to me but it is tough to be away from my family and friends.

“I changed school as well moving from Rice College to Summerhill College and that was hard as I knew no-one going in as it was a new school. But I get on well with everyone and have made a few friends. Going professional has been a tough transition but it is one I am really enjoying.”

Walsh was on the bench for Rovers’ Europa Conference League games against FH from Iceland last July, which was a great experience for him and made for a good Mayo double as Belcarra native Luke McNicholas started in both games.

“It came out of nowhere,” he recalled of being brought into the matchday squad for those games. “I had been training with the under-19’s and I was brought in to train with the first team as they weren’t sure if Ed McGinty would be fit enough to go. I was actually on my way home to Westport when Conor rang to tell me to book the rest of the week off work as I would be going to Iceland with the first team.

“That was huge for me really as I was properly involved with the first team and not just in the squad. It was a huge honour for me and my family. It was great as well for Luke and he was quality in both games; he had been called in late on and performed to the top level as usual.”

Walsh continues a proud line of goalkeepers who have come from Mayo to play for Rovers, from John O’Hara to Ciaran Kelly to Micheal Schlingermann and now Luke McNicholas — even if he doesn’t know an awful lot about those who went before him! 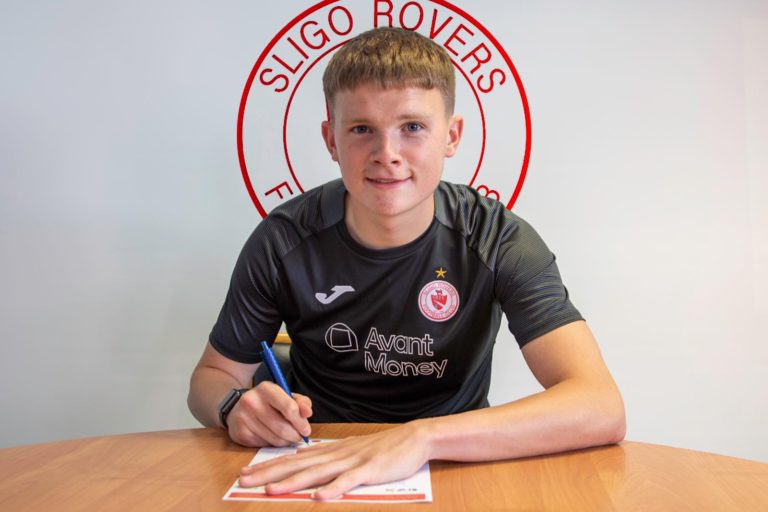 “To be honest I wouldn’t much about the other lads, it would be before my time but I have been told about Ciaran Kelly and the finals in the Aviva,” he offered.

“It is a funny one, I’m not sure how it comes about, it could be that we all start off playing Gaelic and then when we start soccer we end in goal; that’s sort of what happened to me anyway!”

Walsh had a trial with English Premier League side Everton last season, but due to Brexit he was unable to sign, despite the rumours which started before Christmas that he has, something which he said caught him off guard.

“I am not sure how all the rumours started that I had signed with Everton to be honest. I was over there on trial in May of last year and felt I had done well and they were happy with me. But they can’t sign me until I am 18 because of Brexit so that was the end of it,” he said. “Then a couple of months ago I was out with a few of the lads and I started getting texts asking was it true and I didn’t know what people were on about. I checked online then and saw that people were saying I had signed but am not sure how that resurfaced.

“It does help that Rovers have the official link now with Everton; that’s a very good thing not only for me but for any young player that’s coming through the ranks that they could get the chance to go over and see what it is like over there compared to here.”

Walsh is just back in the country after a recent spell away with the Irish under-17’s, where Tom Mohan’s side drew 2-2 and won 1-0 in two games against Belgium. Walsh saved a penalty in the drawn game.

“We had two very strong results, Belgium are a very good side with high-quality players from top clubs. When I look back on them we probably should have won both games. I was really delighted to save a penalty in the first game when we drew 2-2, it was 1-1 at the time so it was important for the team. We now move onto the elite phase which will be next month,” he said.

He has a bright future ahead of him, but Walsh is keeping his feet grounded, looking to concentrate on his education and aiming to continue to do well with the Irish under-17s and the Rovers under-19s whilst also looking to make the breakthrough with the first team.

“I’m in fifth year now so will have the Leaving Certificate next year so for this year I want to keep my place in the Irish squad and play as many games as I can,” he said.

“Then I want to help the under-19s do better. We have a good side and just fell short last season of where we deserved to be and it would be great to challenge for the national title,” he concluded.