1951: It’s remembered in Mayo for more than just football you know! 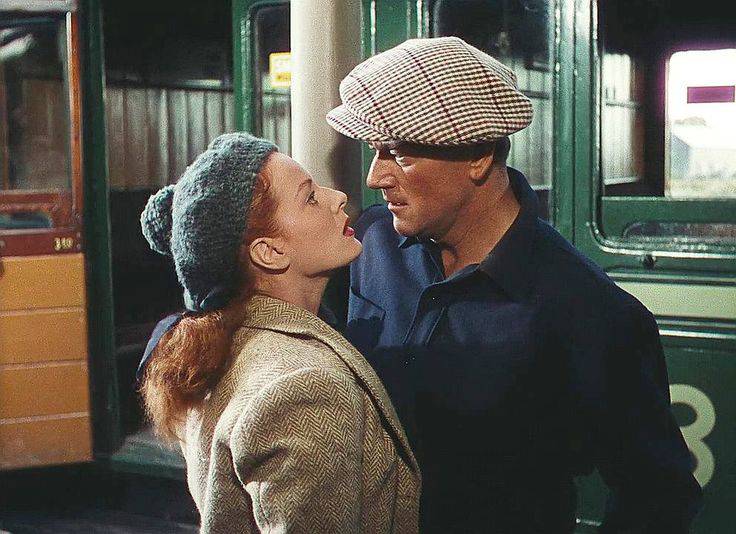 Seventy years ago last June, John Ford’s romantic comedy-drama film The Quiet Man began filming in north Galway and south Mayo. It brought Hollywood stars like John Wayne, Maureen O’Hara, Barry Fitzgerald, Ward Bond, and Victor McLaglen to the west of Ireland in a time when movie stars were ultra-famous.
The film was released in June 1952, and received two Oscars at the 1953 Academy Awards —Ford winning Best Director, and Winton C. Hoch and Archie Stout picking up Best Cinematography. It was also nominated for Best Picture but lost out to Cecil B. DeMille’s The Greatest Show on Earth, starring Betty Hutton and Charlton Heston.
The Quiet Man has been one of the most enduring films of all time and is still having an impact on the west of Ireland today, bringing a lot of tourism into the Galway-Mayo border region prior to Covid. The picturesque village of Cong, which featured prominently in the film, has benefited hugely over the last 70 years, especially from US tourists who want to see the village where some of the most famous scenes in The Quiet Man were shot.
But for all the publicity that The Quiet Man has generated over the last seven decades, there are some things that readers of the Western People may not know about the making of this iconic movie. Here are six interesting facts about The Quiet Man:

1. Pat Cohan’s was not a pub at the time
At the time of filming in 1951, the famous pub in which a lot of the scenes were filmed, Pat Cohan’s, was not actually a public house, but a grocery store, run by John Murphy.
It was unusual at the time to shoot on location, although some scenes in this film were shot in a Hollywood studio, but Ford decided to shoot the bar scenes in Cong for authenticity. He captured some of the famous bar scenes, like Sean Thornton (John Wayne) and Squire ‘Red’ Will Danaher (Victor McLaglen) drinking pints of stout in a break from their fight in the town square, in Pat Cohan’s bar. However, the camera could only be pointed in the direction of the bar, because the other half of the building was the shop.
Nevertheless, it worked seamlessly as it gave a real original Irish look, with men standing around having pints and puffing on their pipes. Nowadays, it is known as Pat Cohan’s — The Quiet Man Bar, which is a gastropub that attracts a lot of visitors and still has the famous emerald green front with the nameplate in gold lettering.

2. ‘Castletown’ train station is still standing
In the opening scene of the film, we see Sean Thornton alighting a train at a station where the sign reads ‘Castletown’, and being greeted with amazement of staff and onlookers there. He looks for directions to Innisfree, and two of the workers get into an argument, until Michaeleen ‘Óg’ Flynn comes along and picks up Thornton’s luggage unbeknownst to him and walks towards his wagon. Thornton, who is a retired Irish-born boxer from Pittsburgh, hops on the wagon and Michaeleen brings him into Innisfree.
This scene was filmed at Ballyglunin Railway Station, which is just between the parishes of Corofin and Abbeyknockmoy, and not far south from Tuam. 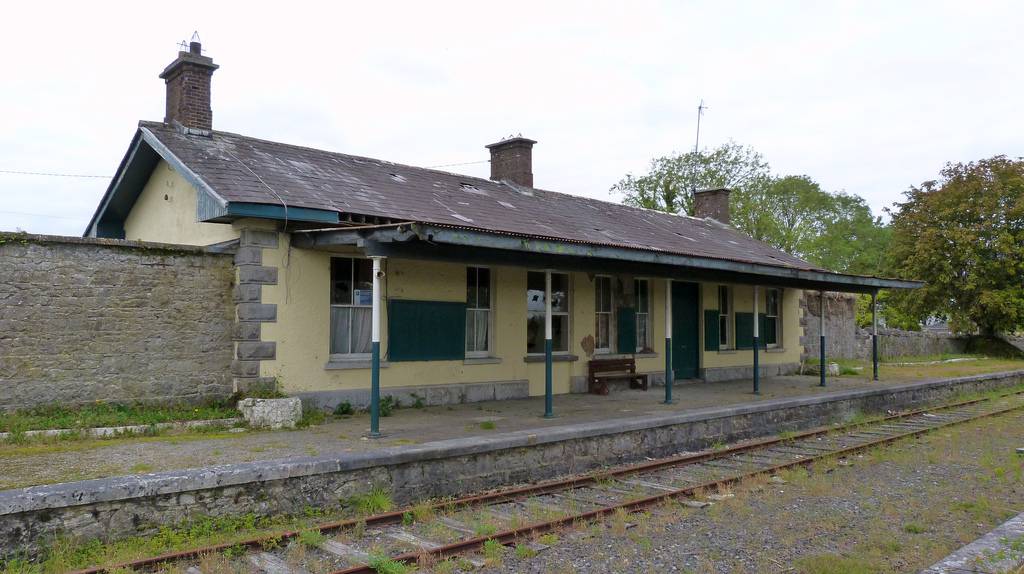 The Quiet Man station at Ballyglunin.

The station was built in 1860 and used until the Claremorris to Limerick line closed in the late 1970s. After years of disuse, the station fell into ruin, but locals set up the Ballyglunin Railway Restoration Project (BRRP), which sought to bring it back to its former glory and make it a tourist attraction. In May 2019, the BRRP reopened the station and it is now used as a remote hub for people who want to do their work there, as well as a venue for hire, for arts and drama etc. It is also listed on the Galway County Council’s Record of Protected Structures. The ‘Castletown’ sign is still there.

3. John Wayne’s tweed cap came from Tuam
During filming, John Wayne, who was one of the biggest names in Hollywood at the time, popped into Tuam to purchase a tweed cap in one of the local shops.
That store, ‘Geraghty’s’, is still open today, under the ownership of Éamonn Geraghty. There is a plaque at the side of the building that reads, ‘In 1951, during the filming of The Quiet Man, John Wayne (The Duke) purchased a tweed cap at this shop, Geraghty’s (Estd 1944)’.

4. Man from The Neale was John Wayne’s double
A man from The Neale gained legendary status for being John Wayne’s double in the film. Joe Mellotte was picked to dress like The Duke and provide him with cigarettes each day — some estimates put the number of cigarettes required per day at 200!
Joe made three pound per day, which was great pay for its time, for his work. He used his earnings to set up a pub ‘Mellotte’s Restaurant and Bar’ in the Neale, which is now known as The Pyramid.
In 1991, the Chicago Tribune wrote about Joe’s involvement in the movie.
He was 27, a strapping athlete when Ford and company arrived. A gang of like-size lads were told to line up while a production man looked them over.
‘’You’ll do,’’ he said, picking out Mellotte.
What they needed was a stand-in for Wayne while scenes were being set up. They also needed someone to fill in for Wayne in distance shots. Big Joe fit the bill. He worked every day for seven weeks at three pounds a day. In addition to standing around dressed like Wayne, he was instructed to keep a supply of 200 unfiltered Camel cigarettes on hand.
“‘It seemed he smoked every five minutes,’ he said of Wayne. 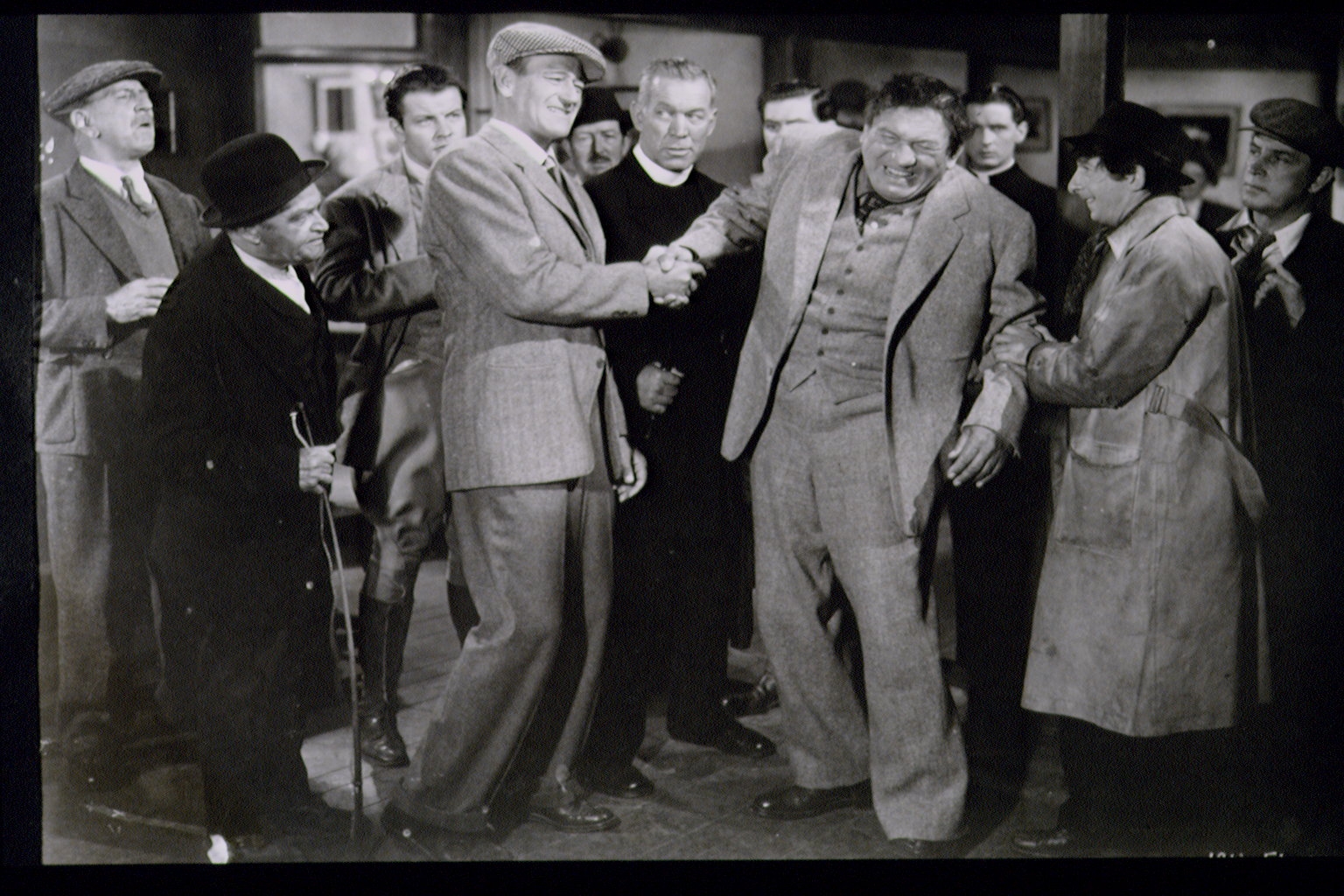 John Wayne pictured in Pat Cohan’s Bar on the set of The Quiet Man.

Mellotte’s Bar displayed a large collection of vintage behind-the-scenes photos of his neighbours posing with the stars, and not just from The Quiet Man. President Ronald Reagan visited the premises in the early 1980s while staying in the nearby Ashford Castle and actor John Travolta was another famous patron through the doors of Mellotte’s.
Joe received letters from people all over the world asking questions about the classic film. He passed away in 1997 but his name will always be remembered in The Neale and its surroundings as the man who stood in for the legendary John Wayne.

5. War of Independence veteran was an advisor to John Ford
Author Ernie O’Malley had a huge influence on the making of The Quiet Man. O’Malley was Ford’s confidant and was on set every day to ensure that everything in the film was culturally accurate.
The Castlebar man moved to Dublin in his formative years and served as an officer in the IRA in the War of Independence and as a commander on the Anti-Treaty side in the Civil War.
His life was like something of a film itself. In 1918, he was sent to England by Michael Collins to buy arms and was a leading figure in attacks on Hollyford barracks in Tipperary (May 1920), Drangan barracks in Kilkenny (June 1920), and Rearcross barracks in Tipperary (July 1920). He was a colleague of Dan Breen, Séamus Robinson, and Seán Treacy, three men who famously sparked the war by ambushing the RIC at Soloheadbeg, Tipperary in January 1919. O’Malley was captured by Crown forces in Kilkenny in December 1920 but escaped from Kilmainham Gaol the following February.
In the Civil War, he was captured by Free State forces in December 1922 and imprisoned until July 1924. By then, he had been elected a TD in Dublin North.
Upon his release, O’Malley travelled the world and wrote three books on the War of Independence and Civil War — On Another Man’s Wound, The Singing Flame, and Raids and Rallies, which were all critically acclaimed, prompting Ford to turn to the Castlebar man for advice when making The Quiet Man.

6. The movie coincided with a famous moment in Cong’s history
On Sunday, July 8, 1951, the cast and crew of The Quiet Man, including the likes of Ford, Wayne and Barry Fitzgerald, gathered in the grounds of Ashford Castle for the official turning on of Cong’s new electricity scheme. Rural electrification was underway in Ireland as ESB crews brought the miracle of electric light to the West of Ireland.
Speaking at the official turning-on ceremony, local priest Fr Lyons noted there had been a ‘long fight’ with the ESB to get the scheme to Cong.
“It must seem strange to our guest of honour, Mr John Ford, to see us here back-slapping because we have got electricity light [but] this is a step in the social development of the district. For us here in this beautiful district the switching on of the light marks the ending of the paraffin oil age.”
The bright lights of Hollywood had really come to Cong.