Can Mayo go back to back against Dublin? Horan gives hint of what to expect

His side might have made a promising start to this year’s National Football League and on Saturday night face a team that is pointless from its two games so far, but Mayo manager James Horan is expecting nothing other than a very formidable challenge from Dublin when the Green and Red arrive into Croke Park their third round Division 1 clash. 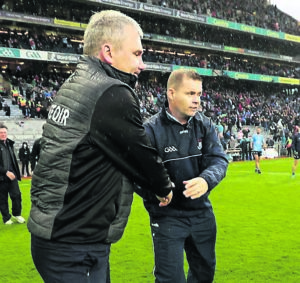 Before this year, the last time the Dubs had lost back-to-back league games was when Mayo and Cork picked them off in the final two rounds of the 2012 campaign. And if you factor in Mayo’s All-Ireland semi-final win last August, it’s actually three consecutive competitive games that Dessie Farrell’s men have now lost – and the last time that had happened to Dublin was in 2009. The flip side is that Mayo’s dramatic win in the All-Ireland SFC semi-final last August was their first in eighteen consecutive league and championship clashes with Dublin so you can forget thinking that going back-to-back on Saturday is likely to come easy to the Green and Red – if at all.
“I know Kerry knocked up a big score against them the last day, we were watching the game. I think Dublin were incredibly unlucky in the first 20 minutes of that game,” said James Horan last week.
“I know exactly what Dessie was thinking on the sideline – the goal went against them, they had another goal chance that they just butchered and the goal that Kerry got that created the avalanche was definitely a Dublin ball. A few things like that went against them and there was a big swing. Their confidence might have ran a little bit after that but up to that I thought Dublin were quite good.”
The All-Ireland champions of 2015 to ’20 were also beaten on the opening night of this year’s league campaign by Armagh – and by their biggest losing margin in a decade – but the Mayo manager said that such is the shape of the Orchard men for this time of the year, they would have caught any team cold that day. He’ll expect nothing only a stiff, stiff test from the Dubs this Saturday.
“They are probably not as far off as people think and I am sure they are relishing us going up there, to get their season going. They’ll see it as a huge chance but we love going up there playing and love playing Dublin. It will be a good encounter for sure.”

Reflecting on Mayo’s first-round draw against Donegal when they fought from five points behind with only fourteen players and on their first win of 2022 against Monaghan last time out, Horan said some of what they’re trying to do has worked, some of it hasn’t, but that the most pleasing aspect of both performances was that his players never stopped slogging.
“Both games we had poor starts so to be down but keep plugging away, to keep at it and to keep trying to figure it out was very pleasing. The effort and all that basic sort of stuff you need in winter league football was there so that’s very pleasing.

“A good few players have got game time now, obviously Brendan Harrison, Jason Doherty, guys like that coming back in, it’s a huge plus for themselves and for the team.”

James Horan has made seven changes to his starting team for Saturday night’s match. 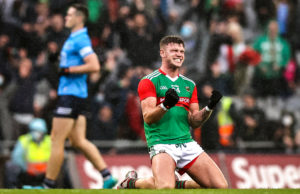 Oisín Mullin and Matthew Ruane are both in line to make their first appearances of the year. Mullin has been named at right wing-back while Ruane, who has completed his suspension for the red card he picked up in last year’s All-Ireland final, will line out at midfield, where he will be partnered by Jordan Flynn.

Elsewhere, Jack Carney will make his first start of the year having rejoined the county panel after playing a key part in Kilmeena’s historic All-Ireland club junior final success. Carney will line out at wing-forward, while Paul Towey also comes into the team in place of Jason Doherty at corner-forward.

Knockmore’s Kevin McLoughlin returns to the bench after being rested for the first two games of the league while Aidan O’Shea and Fionn McDonagh, fresh off his Sigerson Cup victory with NUI Galway on Wednesday night, are also named among the substitutes. Eoghan McLaughlin and Enda Hession are also included amongst the named substitutes.

Saturday night’s game throws in at 7.30pm and will be broadcast live on RTE 2.