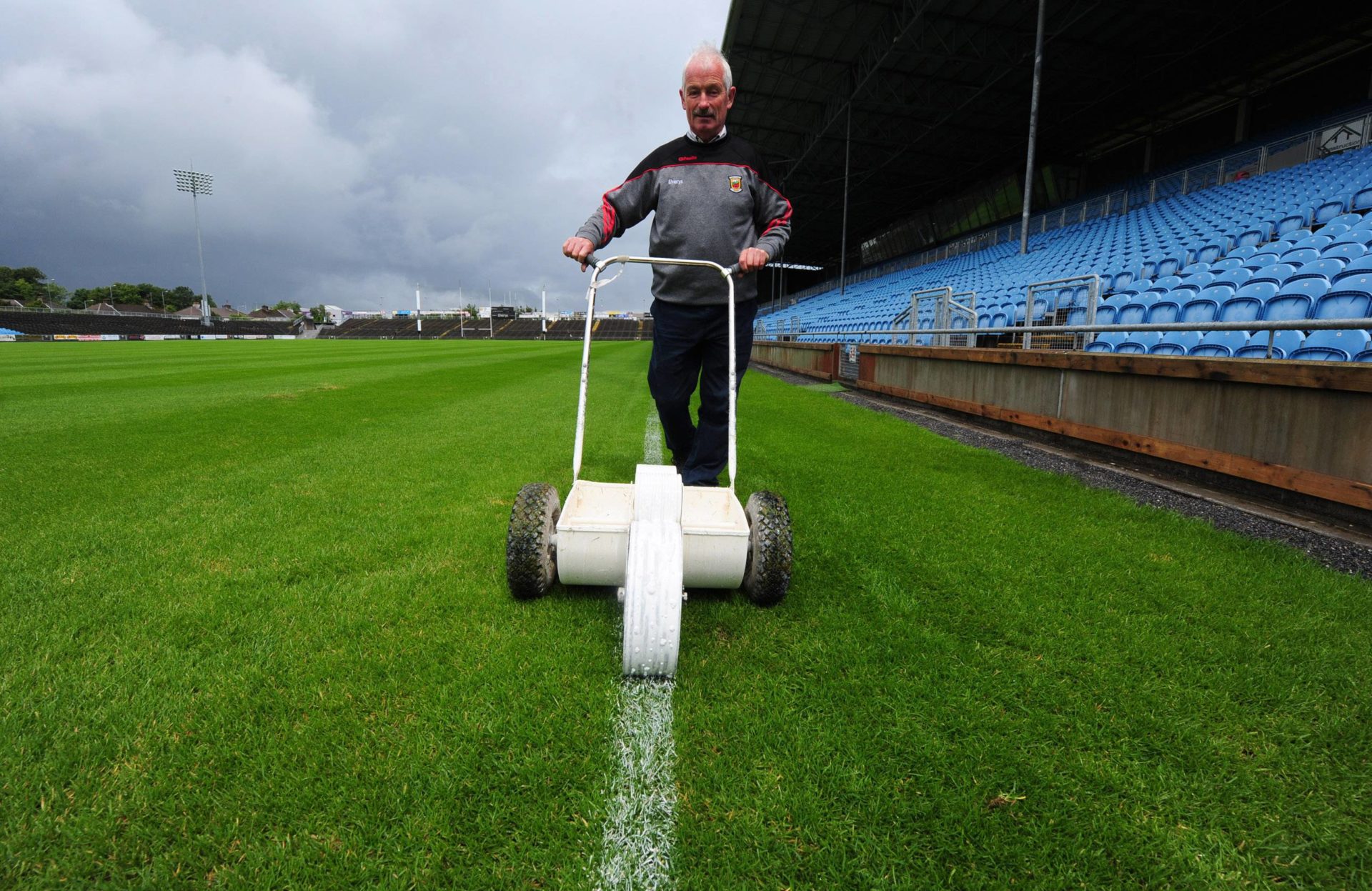 MacHale Park in Castlebar is the spiritual home of Mayo football. Constructed 90 years ago last year and named in honour John MacHale, the legendary 19th-century Archbishop of Tuam, the stadium has been the setting for some of the greatest days in Mayo’s footballing history.
At the moment the stadium lies relatively quiet as the pitch recovers from an extensive redevelopment process. The county finals, which would usually light up the old grounds in autumn, were absent in 2021. But come this summer, all going well, the big new stand and the concrete terraces will be reverberating to the sounds of football once again.
As supporters, we can sometimes take for granted the work that goes into ensuring MacHale Park is ready and waiting to receive tens of thousands of eager Mayo supporters on match days. But having the pitch, the grounds, the changing rooms and everything else pristine and ready for action every time the men in Green and Red take the field is no small task. The man charged with that responsibility is the MacHale Park groundsman, Philip Heneghan.
Philip, a native of Partry, has lived in Castlebar for the last 40 years. He worked as a mechanic and volunteered with Castlebar Mitchels while the club still owned MacHale Park, working on the pitch alongside the likes of GAA stalwarts like Mick Ruane and Paddy Kerrigan.
“Back then it was owned by Castlebar Mitchels,” said Philip. “We had about five or six volunteers who would meet every Saturday morning and we’d prepare the pitch for games coming up. That time we had a fence around it as well.
“So one group would repair the fence and another would be on the pitch, cutting and marking and repairing divots.”
When the County Board took over MacHale Park in 2005, they advertised for the role of full-time groundsman. Philip threw his name into the hat and got the job.
“I locked the toolbox, and I’m there ever since!” he says, laughing.
The stadium has undergone enormous change in Philip’s time as groundsman. In 2008, a €16 million redevelopment saw the erection of the 10,000-seater stand and extensive upgrades around the perimeter of the grounds. Redevelopment works this past year have seen the entire playing surface relaid and the pitch extended by five metres at the Albany End.
Likewise, Philip’s role has changed with time. When he started, a crew of volunteers with a mower, a few forks and a bit of know-how were enough to keep things ticking over. That is certainly no longer the case.
“It’s a whole different set-up now,” he says. “Now we have advisors – we have advisors on fertilisers, advisors on how to cut the pitch, what machinery to use, it’s all part of a programme,” said Philip. “It does make it easier, you have more qualified people advising you what to do.”
On a big match-day in the summer, such as a televised Connacht championship game between Mayo and Galway, Philip would easily work a 12-plus hour shift at MacHale Park. He’s the first man in and the last man out. He would usually arrive to open up prior to 7am before tackling a series of checks and re-checks, ensuring everything is 100 per cent right by the time the cameras switch on and the turnstiles start to spin.
“You’d be there the night before because the television crew would be in the night before getting set up,” said Philip. “If it was a fine summer’s day, you’d give the pitch another cut in the morning before the match.
“You’d have it marked the day before but you’d go over the markings again in the morning, especially for a televised game.
“You’d organise all the nets and the flags, all that would have to be put up on the day of the game. It’d be a 12-hour shift anyway, quite natural.”
And Philip’s remit isn’t confined to the playing surface. He has responsibility for the entire grounds, and when crowds in excess of 25,000 people are expected, it’s a long checklist of jobs to be marked off. 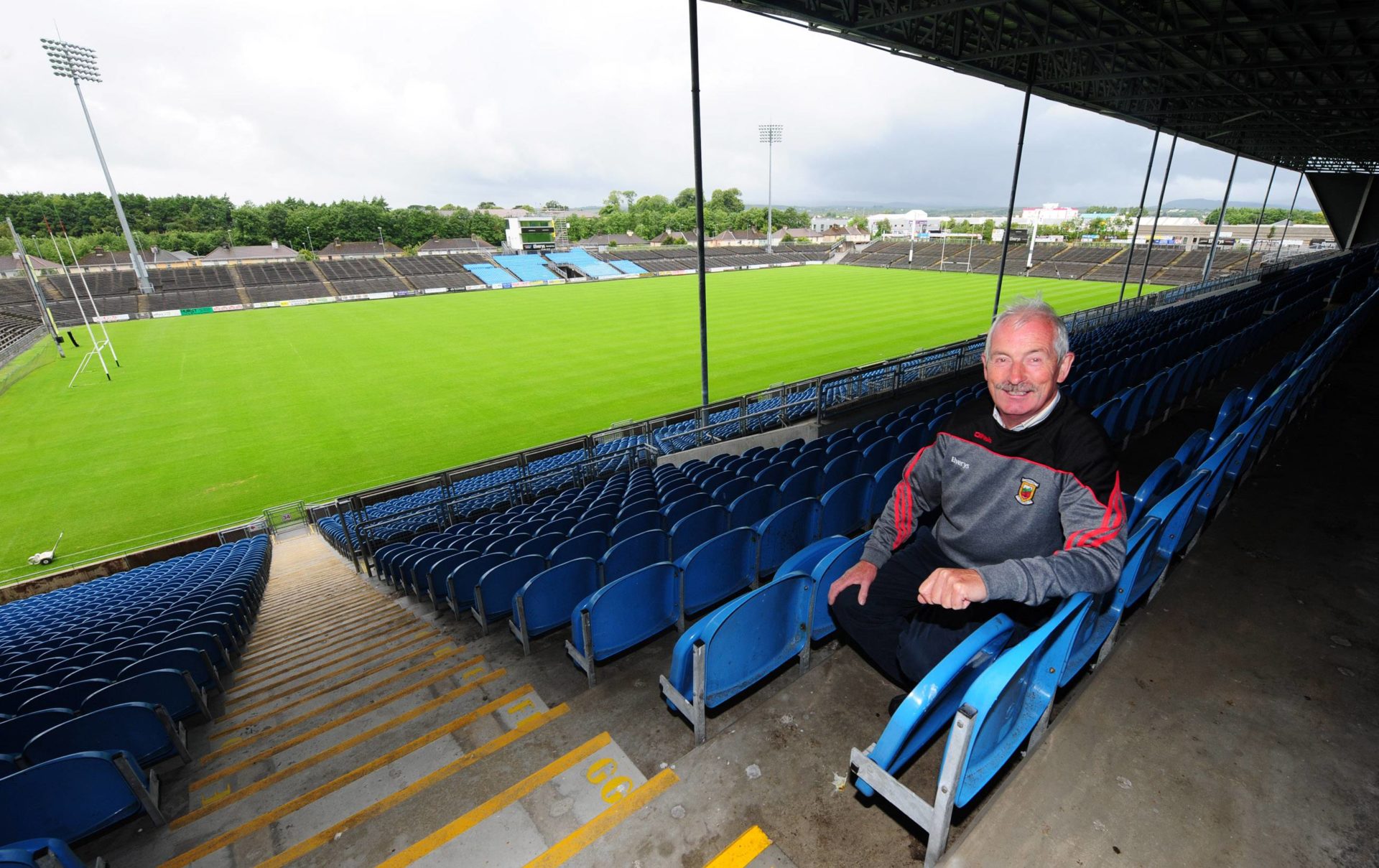 There is a pitch committee in place at MacHale Park but the bulk of the on-site work is down to Philip, his son Martin and his son-in-law Mickey.
“The tunnels, the toilets, open up the press box, the kitchens, the dressing-rooms, you’d have all that ready,” he explains.
The work carried out on the pitch this year was needed, he says. Between the various inter-county teams playing and training, club games and all the rest, MacHale Park gets a lot of use, and all those studs take their toll. Keeping the surface in good shape is a never-ending battle.
“You need a big budget to maintain it,” said Philip. “There’s a lot of expense to maintain it and keep it up to the standard. It’s important that you have a budget in place, between fertilising, seeding, all that work.”
The pitch is expected to be back in use by this spring, with the start of the 2022 Connacht championship earmarked as a target date for the first game back. Philip is protective of the surface and his advice to the decision-makers is not to rush anything.
“The longer it gets to rest, it’ll be in better condition and it’ll take more abuse when it is open. Because it will get a lot of use when it’s open, there are a lot of teams using it,” he notes.
Asked for his advice to any young person interested in getting into the area of groundskeeping, Philip says it’s essentially the same as he would give to a young footballer: it all starts with the club.
“If you look after your club pitch and start learning from that, learn what you have to do between cutting, marking, setting it up. You’d get a fair idea of what’s involved from that, what has to be done,” he said. “Bringing in a young fella straightaway who’s raw, it’d take a good while to train him in. You’d have to keep an eye on him, break him into the system. But if you’ve done it for the club, you’ve got a great advantage.”
Speaking to Philip, it’s impossible not to be struck by the pride he feels in MacHale Park and its playing surface. It’s a labour of love, but a job that is worth all the long hours when he sees the surface looking pristine in the summer sun on big match days.
“There’s a huge satisfaction to be taken there, especially if it’s on television. I’d know the lads who look after Croke Park. They’d be watching a televised game and they could send you a text complimenting you on the pitch. It’s nice to get that feedback from those fellas.”
And just like every inter-county manager in the country is constantly watching his counterparts in other counties, looking for tidbits and trying to find an edge, so too are the groundsmen. The relationship isn’t quite as competitive; it’s more collaborative, based on the sharing of advice and reports of what’s working and not working elsewhere.
“It’s all about passing information,” says Philip. “We have meetings, there’s a ground staff committee at Croke Park and we have meetings regularly. We go to training regularly at Croke Park and we all discuss things. We all have the same problems. Money is the biggest issue at every venue.”
For the time being, Philip is keeping a watchful eye over the new surface at MacHale Park, waiting for the time when the grass is thick and green and the seats in the stand are full again.
Hearing him tell it, he has no plans to park the mower any time soon.
“I’ll keep going while the health is good anyway, while I’m able to do it,” he concludes.