The following is a press release from the LGFA:

The Ladies Gaelic Football Association and its official retail partner and National League Sponsors, Lidl Ireland, are delighted to announce a four-year contract extension that will mark a decade of #SeriousSupport, representing an investment of €10 million by the retailer. The extension will take the partnership through to the conclusion of the 2025 season. 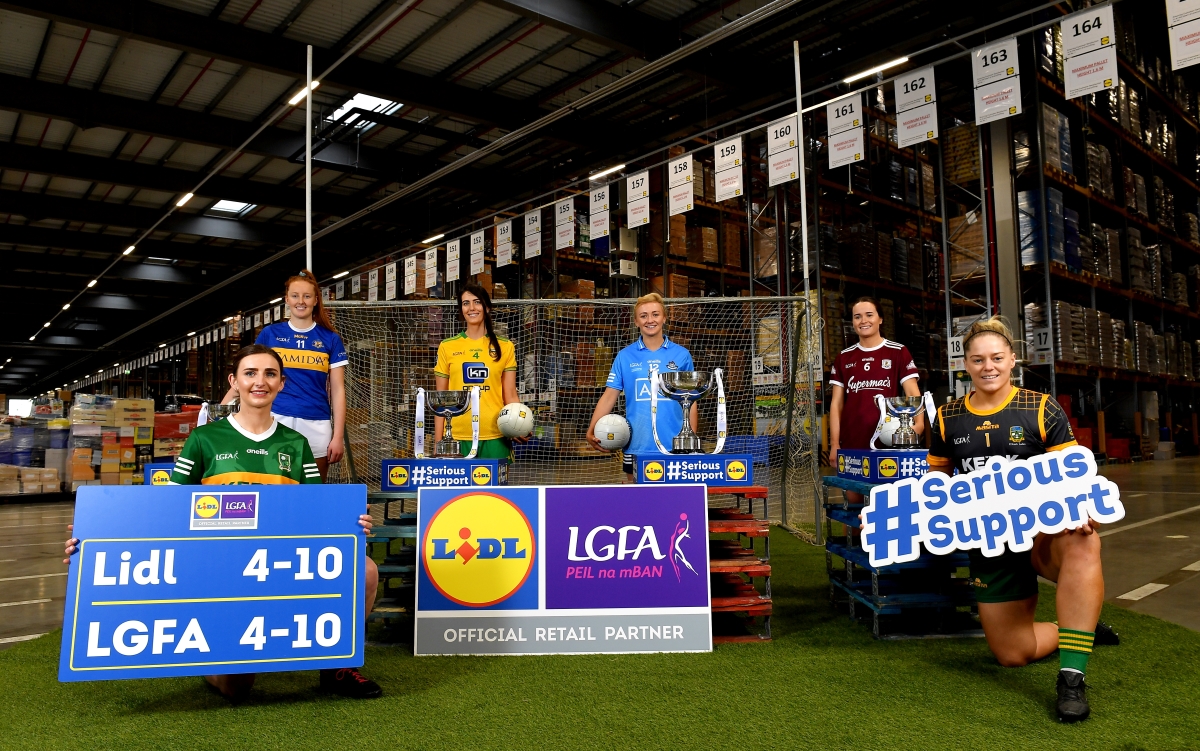 In attendance at the Lidl Regional Distribution Centre in Newbridge, Kildare, to mark the launch of the 2022 Lidl Ladies National Football Leagues are from left, Cáit Lynch of Kerry, Aishling Moloney of Tipperary, Emer Gallagher of Donegal, Carla Rowe of Dublin, Nicola Ward of Galway and Monica McGuirk of Meath. Lidl Ireland have also confirmed a four-year extension of their partnership with the LGFA, which will see Lidl Ireland remain as the LGFA’s official retail partner and National League sponsor until the end of 2025. Photo by Brendan Moran/Sportsfile

To launch the extension, Lidl have committed to focusing on further progress in three main areas:

Since coming on board with the LGFA with a bang in 2016, Lidl have invested more than €5 million through various initiatives, advertising and funding in order to increase participation in the game, gain more exposure in the media and support grassroots clubs in particular with sporting equipment and jerseys. Lidl are now set to double that investment over the course of the next 4 years, pledging to invest an additional €5 million bringing the total investment to €10 million in 10 years of sponsorship. To date:

· 68 schools have taken part in the #SeriousSupport Schools Programme

· Over 200 schools have received new jerseys and/or equipment

· Over 500 clubs have received new jerseys and/or equipment

· Over 200 clubs have received cash donations

A key objective since launching the partnership has been to increase attendance at the TG4 All-Ireland Finals. This objective has clearly been achieved with attendance records being broken in every year of the sponsorship that Croke Park did not have a limited capacity – rising from 31,083 in 2015 to more than 56,000 in 2019. Lidl are committing to encouraging even greater attendance and helping to fill Croke Park to full capacity at the TG4 All-Ireland Finals by 2025.

Lidl has developed and mobilised dedicated programmes specifically designed to increase participation at all levels of the game. These programmes include the #SeriousSupport Schools athlete mentor programme and the One Good Club programme in association with Jigsaw, developed to raise awareness and improve understanding of youth mental health while empowering clubs to positively affect their members and communities. In launching the partnership extension, Lidl plans to continue to increase participation, investing in programmes that break the trend of drop-out rates among girls, particularly as they hit their teenage years. In the period since Lidl partnered with the LGFA in 2015, there has been a 73% increase in underage playing numbers.

This week, Lidl also relaunched the successful Lidl Plus LGFA Club Rewards Scheme giving LGFA clubs across the country the opportunity to raise funds for their local club with the maximum amount of €20,000 up for grabs in each of the four provinces. Full details of the scheme can be found at: https://www.lidl.ie/serious-support

“We are pleased to announce the extension of our partnership with the Ladies Gaelic Football Association through to 2025 – a commitment of €10 million investment in 10 years of sponsorship. Our partnership with the LGFA has been one of the more significant sponsorships in women’s sport in Ireland to date, and a move that has been hugely supported by our customers and our employees alike. We are exceptionally proud of the progress we’ve achieved together so far and look forward to building on this over the next 4 years.

As a long-standing supporter of not only women’s sport, but women and girls across the country through impactful initiatives like period poverty, menopause and support for those affected by miscarriage, we are determined to use our resources as one of the biggest retailers in the country to have a positive impact on the communities we operate in and our continued support of the LGFA is a great opportunity for us to do just that.”

Ladies Gaelic Football Association President Mícheál Naughton said: “We are thrilled at the prospect of even more #SeriousSupport from Lidl Ireland. This absolute dedication to our sport is another huge boost as we look forward to our 50th anniversary celebrations in 2024. Lidl Ireland have been with us since 2016 and, during that time, they have helped to elevate the profile of Ladies Gaelic Football to new levels, while engaging with our grassroots members through various and innovate initiatives. This year, the Lidl Plus LGFA Club Rewards Scheme has returned and I would our members to get behind this scheme and help to earn real rewards for their local clubs. On the field of play, we’re looking forward to another memorable Lidl National League campaign, with all of our games once again available to viewers at home and across the world.”

The 2022 Lidl Ladies National Football Leagues commence next Saturday evening, February 12, with the TG4 cameras present for the live TV fixture between Donegal and Galway in Ballybofey (7.30pm).

All of the other weekend games can be watched by signing up to the LGFA’s live subscription service: https://page.inplayer.com/lgfaseason2022/

The full list of Lidl NFL Round 1 weekend fixtures reads as follows:

All fixtures 2pm unless stated