Goals in either half by Ryan O’Donoghue and Jason Doherty secured Mayo their opening win in this season’s Allianz Football League as they saw off Monaghan 2-10 to 1-11 in Clones on Sunday afternoon. 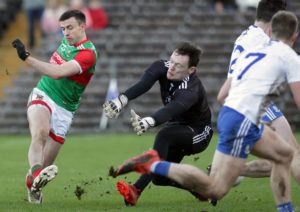 Doherty’s 53rd minute major was a game-changer as Mayo hadn’t led since the ninth minute.

James Horan’s men looked to grow in strength in the final quarter and yet they still required Paddy Durcan to block a last gasp Ryan McAnespie shot on the goal-line to prevent the home side from snatching a late, late victory.

Ten wides and a raft of other wasted chances by Monaghan infuriated their manager Seamus McEnaney whereas Mayo will travel to Croke Park on Saturday week well satisfied with their three league points from two tough opening matches against Ulster opposition.

Ryan O’Donoghue struck 1-4 during a first-half that ended with Mayo still one point in arrears – and worried as to the health of wing-back Eoghan McLaughlin who was stretchered off with an ankle injury. Speaking after the game, Horan said the extent of the injury may not be as bad as initially feared and the Westport player did emerge from the dressing-room to join his teammates in the stand to watch the second-half.

A Jack McCarron goal, in response to O’Donoghue’s, saw the teams deadlocked at 1-1 apiece after nine minutes and it was nip and tuck between there and the interval, with McCarron just nudging the locals 1-8 to 1-7 ahead with a pointed free before the short whistle. 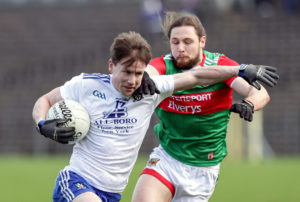 Aidan O’Shea was a first-half replacement for captain Stephen Coen in the middle of the park and helped block many of the channels Monaghan had experienced their joy with in the first-half. The scoring dried up so significantly that the opening half hour of the second-half resulted in just four scores, two apiece, but Doherty’s goal handing the visitors the advantage.

Former All-Star Brendan Harrison limped off in the 63rd minute and exited St Tiernach’s Park with a heavily strapped thigh but Conor Loftus arrived off the bench with a crucial point before O’Donoghue kicked his sixth point to add to his early goal, as the Green and Red turn their attention to Dublin the weekend after next – a game that Horan said will come too early to signal the return of the GAA’s all-time top championship scorer Cillian O’Connor.