The season ahead is one to be excited about despite the disappointment of back-to-back All-Ireland final defeats for the Mayo senior football team.

That’s according to Seamus Tuohy who says he had a fruitful meeting with team manager James Horan in the wake of his election as Mayo GAA chairman last month.
After their one-year hiatus in the second tier, the Green and Red return to Division One of the National League this weekend but with the added difficulty of playing all seven games outside the county.
MacHale Park will not be available until their Connacht SFC quarter-final clash with Galway on April 24 at the earliest.
Next Sunday’s league opener against Donegal at Markievicz Park in Sligo is one of Mayo’s three ‘home’ fixtures moved on account of the resurfacing of their own pitch.
Seamus Tuohy has struck an optimistic tone however, saying that one of the reasons he had contested the position of chairman was because of the potential he sees in the county’s senior football team.
“One of the first meetings I had was with James and look it, it was very fruitful. I am excited about the prospects.
“I’m always excited about Mayo GAA and I suppose that’s why I’m involved in the role that I am and why I came back into the role.
“I’m very excited particularly by the number of young lads coming forward.
“I think that has been huge in Mayo’s progression over the last year or two, the amount of young lads that have come into the team.”
The league defeat to Galway in the opening week of January was Seamus Tuohy’s first opportunity to see and meet the 2022 squad at close quarters and he has expressed his hope that some of the young, new faces who featured in that game will be involved in the Division 1 campaign also.
“Irrespective of the disappointments we may have had in the past, there’s always something exciting about Mayo GAA and I suppose that’s why we’re all so passionate about it. 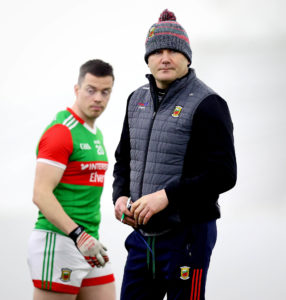 Seamus Tuohy is the fifth chairman Mayo manager James Horan (pictured) has worked under since first appointed by the board led by James Waldron in 2010. Paddy McNicholas, Mike Connelly and Liam Moffatt each held the hotseat in between. Picture: INPHO/Ryan Byrne

“I think there’s a very fruitful season to look forward to and hopefully the results will reward some of the talent that has come forward and that we will reach our ultimate goal.
“That’s one of my targets always, that we do that and we do what’s best for Mayo GAA”, said the chairman who has made no secret of his desire that Mayo would land the Sam Maguire on his watch.
“All I can say is that I look forward to working with James and to working with his teams.
“I’ve been at one or two of his training sessions and you know, there’s great energy, there’s great drive and there’s great enthusiasm within the squad at this present time and I hope that continues throughout the season and I’ve no doubt it will.
“We’ll have close connections with the team over the coming season so we wish them the very best.
“We’ll be there and we’ll do our very best for the team,” he said.
Making just the same commitment to Maurice Sheridan and Sean Deane, managers of Mayo’s U20 and U17 teams, to senior hurling manager Derek Walsh, and U17 and U20 Mayo hurling boss Brian Finn, Tuohy said: “You never know come this time next year what we might have on the shelf.”