A debut for Castlebar Mitchels youngster Donnacha McHugh, a first start for Aiden Orme and the return of Jason Doherty from a long injury layoff are the standouts from James Horan’s team selection for Sunday’s Allianz Football League Division 1 opener against Donegal. 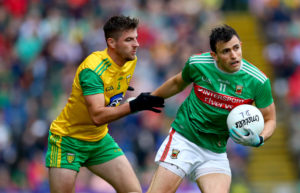 Donegal’s Daire O’Baoill and Jason Doherty of Mayo in action in 2019 – the last time Doherty featured for the Green and Red.

The team features nine of the side that started last September’s All-Ireland final defeat to Tyrone.

Jason Doherty’s last game for Mayo was also against Donegal in the Super 8s on August 3, 2019. Eoghan McLaughlin and Conor O’Shea all return to the starting fifteen with Castlebar Mitchels’ Donnacha McHugh making his league debut at centre-back. McLaughlin is joined on the team by his Westport teammates Lee Keegan, at corner-back, and Fionn McDonagh at wing forward. Five-time All-Star Keegan will make his 130th league and championship appearance this Sunday.

Knockmore’s Aiden Orme wears number 11 with all his previous appearances having come off the bench. The team will be captained from full-back for the first time by Stephen Coen.