A trip along Ox Mountain side 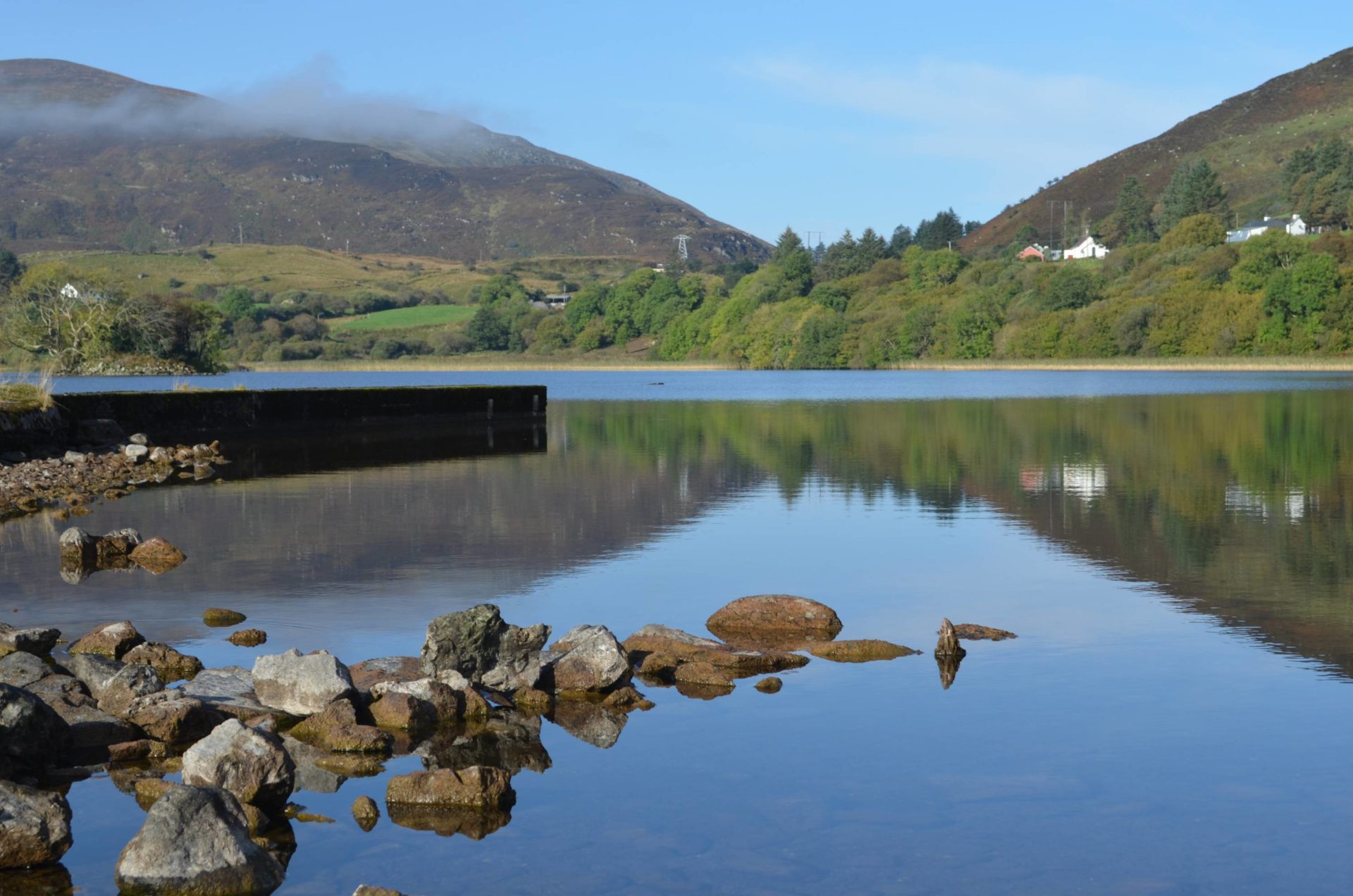 The Ox Mountains have been the sturdy sentinels of the Sligo-Mayo border for millions of years, writes PAT McCARRICK.

Bells of purple heather chime with the scenes below;

The farmland and the meadows of Sligo and Mayo.

Every tree and every stone, every bird and flower wild

Reminds me of the folks who lived along Ox Mountain side.

The mountain range of south-west Sligo and north-east Mayo, the Ox Mountains, are piled like a barricade on the coast of north Connacht. Poetically they are referred to as Slieve Gamph and in some circles, they are even known as Saint Patrick’s Mountains, so named after the saint who built churches on its slopes and left his name on some of its holy wells. None of these titles seem to have much in common but they all have some connection with these well-worn and blessed hills.

Origin of the name

The reference to ox or oxen would seem to stem from legend and harks back to a time when cattle, rather than sheep, held sway along the mountain. A contribution to the National Folklore Schools Collection from the 1930s, made by Pádhraic Breatnach of Tourlestrane in south Sligo, goes some way in explaining the origins of the name.

“Long ago there lived on the Ox mountains two young bulls. When those bulls were young, they lived at Coill Dá Laogh. Every morning they used to walk from Coill Da Laogh to Cnoc na Síde which was the whole length of the Ox mountains. They used to graze on the mountains.

Slieve Gamph is often given as the Irish translation or the alternative Irish language name for the Ox Mountains. However, a literal translation, according to Patrick Weston Joyce (Irish Local Names Explained), suggests something else.

“Sliabh Ghamh or Mountain of Storms, which in the spoken language was mistaken for Sliabh Dhamh, the mountain of the oxen, and translated accordingly.”

“In regard to the place-names mentioned, ‘Coill Dá Laogh’, which is rendered Coill Dá Lao in standard Modern Irish orthography, means ‘the wood of the two calves’. I note that the standard English form of the name on Ordnance Survey maps is Culdaly. The name Gleann Dá Dhamh would mean ‘glen of the two oxen’.

Strangely, Mountain of Storms, while seemingly an accidental title, is quite accurate in describing these mountains on the edge of Ireland waiting to engage the Atlantic foes of wind and rain. The mountains have the ability to reflect and deflect powerful storms; taking on the responsibilities of fighting and forecasting the approaching weather. Their close-up, dark foreboding looks are a sure sign of an approaching storm and a fairer, more distant continence, expresses the likelihood of brighter days. Their high hills of fog and distant pockets of winter snow generate mystique and wonder and the resounding roar of flooded rivers gives a fresh voice to the ancient ox that once roamed their slopes. 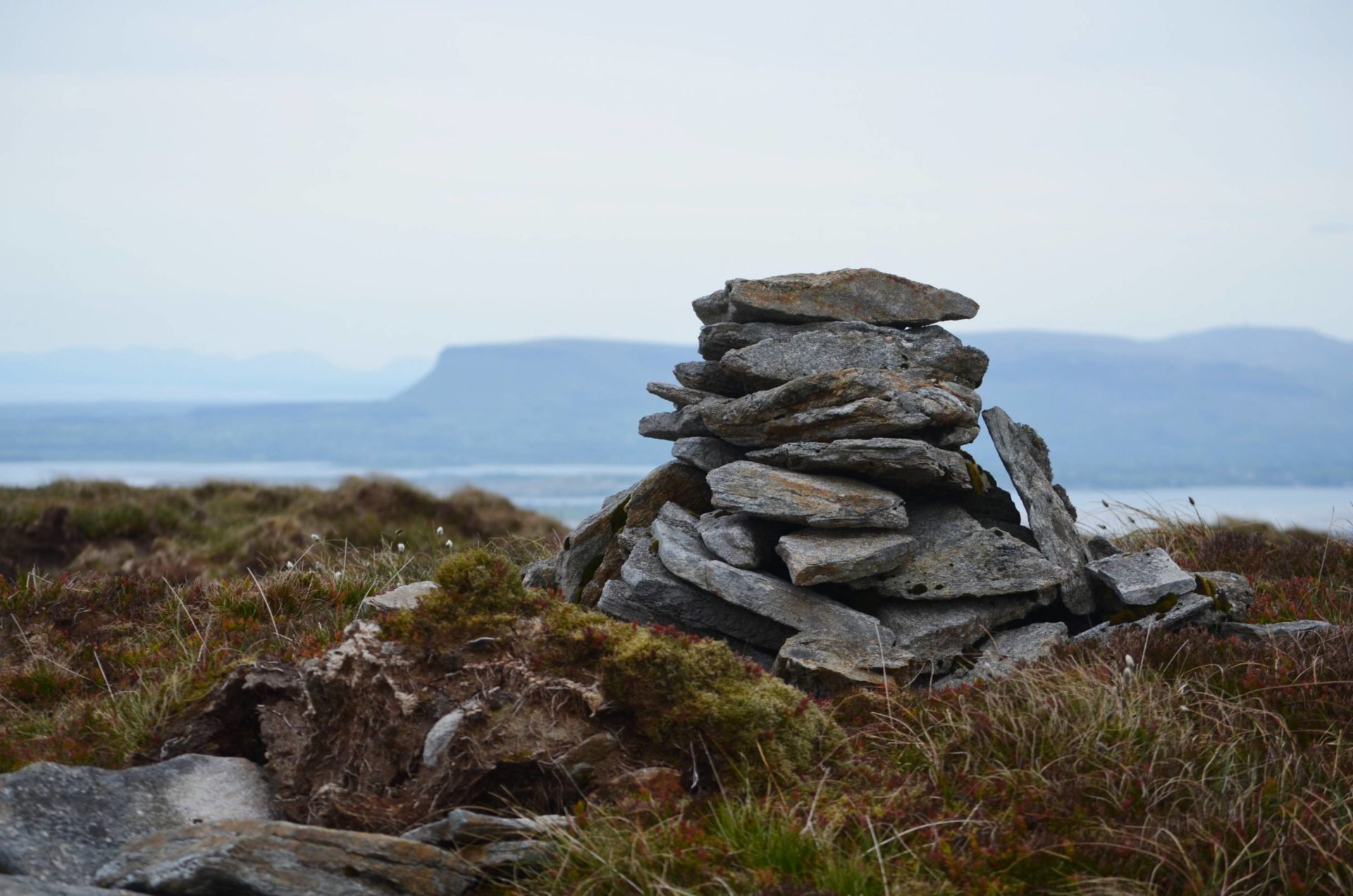 It should be remembered here that 5,000 years ago, when cattle were as much currency and a symbol of wealth as they were farm animals, the slopes of the Ox Mountains were fresh and green and without the present-day covering of bogland. It is easy to imagine the vast lowland valley between Kilmactigue and Knochnashee, along the banks of the River Moy, filled with these early cattle, grazing away to their heart’s content.

If this mountain is the king of the region, then his crown jewels are the lakes and rivers that pool and fall at his feet. What hoard could not be sacred, containing the gems of Lough Talt, Lough Easkey and the shining lakes of Callow and Cloonacool? How proudly bound in love is this king; inseparable with the River Moy, Queen of the Plain, as she encircles him with her sparkling rivers of silver and gold.

The Ox Mountains occur on a formation that extends from Clew Bay in Mayo to the Highlands of Scotland. The mountains themselves extend from Foxford to Ballisodare in Sligo, a distance of 40 kilometres — as the raven flies. The mountains are reputed to be, not just Ireland’s oldest, but among the oldest on earth. Geological estimates suggest the mountain is between 400 and 450 million years old. Some sources even go as far as to suggest the Ox Mountains are in fact, 600 million years old!

Old as that may seem, it is not that old when you consider that Planet Earth is 4.5 billion years old, but old enough when compared to Mount Everest, which is only 60 million years old. While Everest is high and mighty, the Ox Mountains are old and venerable!

Their highest point is Knockalongy (Cnoc na Loinge — Hill of the Encampment). At a height of 544 metres, this peak overlooks the parishes of Skreen and Dromard in west Sligo. There are many megalithic tombs on the plain between Knockalongy and Sligo Bay to the north. There are also two small lakes at the foot of this mountain; Lough Aghree and Lough Minnaun. Lough Achree (Lake of the Heart) was allegedly formed in 1490 by an earthquake and is reputed to be the youngest lake in Ireland.

In recent centuries, towns and villages grew up at the foot of fertile slopes and along rivers where corn could be grown and mills could be easily built. The influence of the landed gentry was evident in the towns of Dromore West, Coolaney and Aclare where Catholic churches and schools were located some distance from the village centres. Foxford grew from humble beginnings to become a thriving business town because of the industrial influence of the Foxford Woollen Mills. 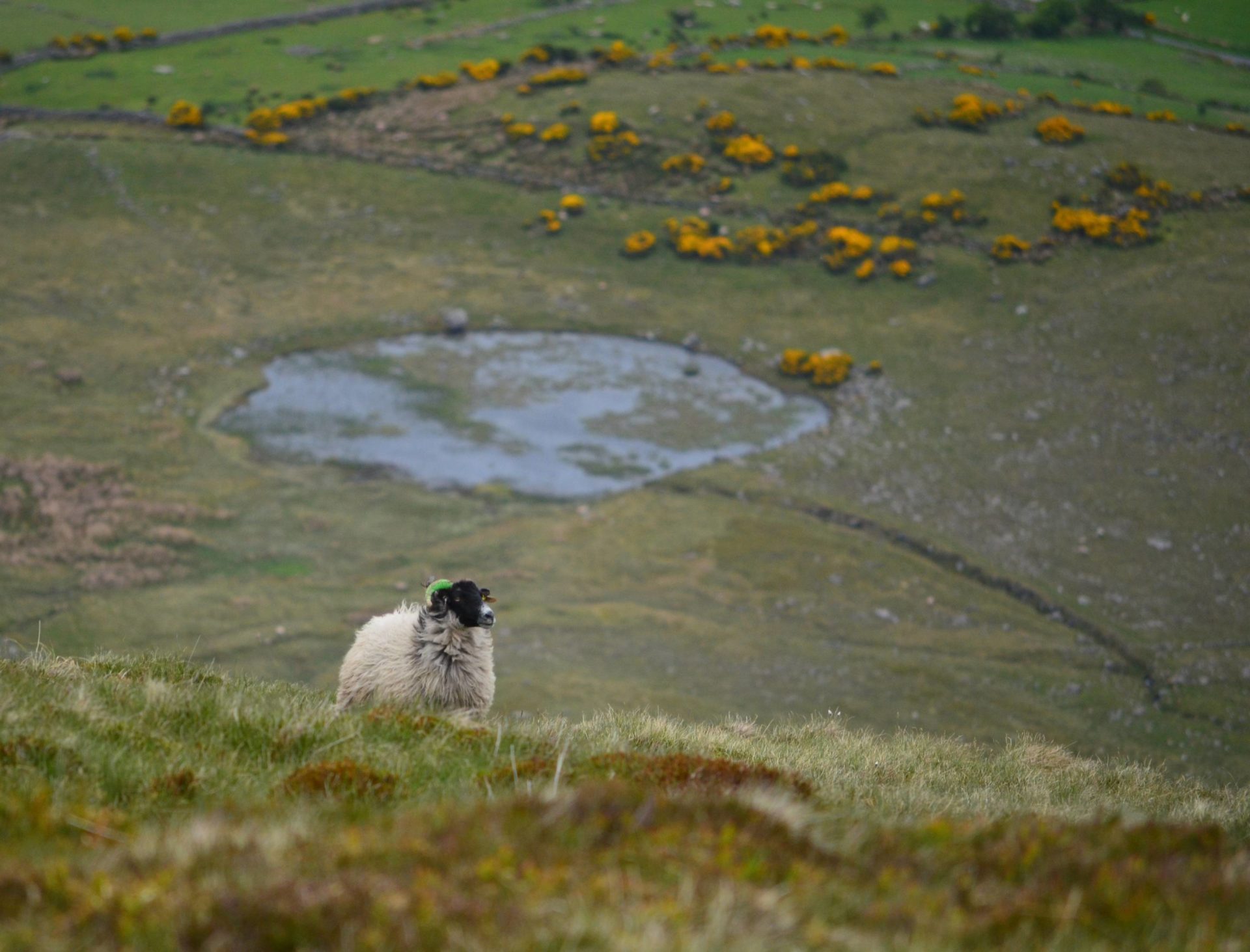 The hardy black-face sheep breed that is synonymous with the Ox Mountains.

While it has a timeless association with the ox, it is sheep that have come to the fore in recent generations with regard to Ox Mountain farming – the softer the ground, the smaller the beast. A hardy black-faced mountain breed has been developed over the centuries to best take advantage of the meagre rations provided on the weather-beaten slopes. These sheep can not only survive, but they also thrive on such exposed pastures. Excellent mothers utilise the tasty pickings available on the hills to produce a crop of hardy lambs each April. The sale of these lambs provides an income through subsidies and sales that allow local farming families to remain on the land.

From the time of the great cattle herds of Queen to the humble sheep flocks that supplied Foxford’s Woollen Mills, to the much-sought-after breeding ewes of today, local farmers have always managed to carve a living from the slopes of the Ox Mountains. Fertile pockets here and there along the mountain have great value and despite the undulating landscape, many farms exist complete with summer meadows and sheltered glens. The Ox Mountain region has many well-preserved ringforts, raths and cashels dating from the early Christian period, and many were used well into medieval times. Ringforts were used as homesteads and dwelling places for farming communities. No family, ancient or modern, that ever began its life on the slopes of the Ox Mountains failed to love them. Their overarching warmth and ability to provide makes them a parent above our own parents, a guardian, to protect and provide and defend.

The lea fields of the lowland have their appeal, the farmland of the coast is clean and its soil runs deep but the intimacy of a mountain meadow is all-consuming — intertwined with past lives, new beginnings, family and tradition. The first farmers of 5,000 years ago and the last farmers of today have the same thing in common: an abiding love of these intimate fields and open hills. Even in the face of failing fortunes, an unwritten oath anchors the native to these mysterious and mystical mountains.

Pat McCarrick, from Cloonacool in Co Sligo, is a photographer and local history enthusiast. He is the author of two previous books, The Windings of the Moy Revisited and Henry L. Gavigan: His Life & Collected Poems. He is currently researching a new book, Along Ox Mountain Side, and is seeking songs, poems and short stories from the Ox Mountain region. He can be contacted by email at [email protected]