Kevin Egan at the Connacht Centre of Excellence, Bekan

Ballinrobe Community School crashed out of the Connacht Colleges senior ‘A’ football championship in heartbreaking fashion on Wednesday afternoon when a wonderful injury-time score from Summerhill College captain Seán Clifford settled a tense and closely-fought contest at the Connacht Centre of Excellence.

The win means that it’s Summerhill College who will advance to meet St. Colman’s of Claremorris in next week’s quarter finals.

Ballinrobe were more than a match for their Sligo opponents all along the spine of the pitch, where Eoghan O’Halloran, Diarmuid Duffy and 2020 Mayo minor captain Ronan Hughes were particularly impressive, but the extra depth that Summerhill manager Mark Breheny had in his ranks was crucial to his side’s victory. Four substitutes all came on to make a solid contribution to the team’s cause, none more than Ronan O’Hehir, who got on the end of an excellent team move to score Summerhill’s decisive second half goal. 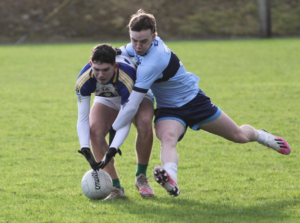 Outside of the third quarter, when Summerhill made their decisive move, there was nothing to call between these teams and Ballinrobe were more than a match for their opponents.

Daire O’Boyle and Mark McDaniel kicked some excellent points for Summerhill but Ballinrobe always seemed to be able to find an answer, going point for point with their opponents before a run of three points in a row from Kevin Mullin, Eoghan O’Halloran and Ronan Hughes gave them an 0-7 to 0-5 interval lead.

The first two points of the second half were shared before Summerhill hit a purple patch, taking the lead through O’Hehir’s goal and then adding three further points. A crucial goal-line tackle from Seán Biggins denied Summerhill midfielder Ross Doherty a second green flag, and that proved crucial as Ballinrobe worked their way back into the contest, eventually equalising when Diarmuid Duffy hammered the ball into the roof of the Summerhill net from close range after being set up by Tom Lydon.

Both sides had their half chances in the latter stages but as the contest entered injury time, Summerhill seemed to have that bit more energy and while their first good scoring chance was pushed wide of the posts, Clifford made no mistake from a wide angle to settle the contest and end Ballinrobe’s dreams of senior glory.

For a full report and details from this game, be sure to check out next Monday’s Western People.