Mayo GAA needs a Centre of Excellence to cater for the requirements of its inter-county and club teams, but hasn’t the money to fulfil that ambition now, which is a big problem. So said Mayo GAA secretary, Dermot Butler, in a briefing with the Mayo media last week. 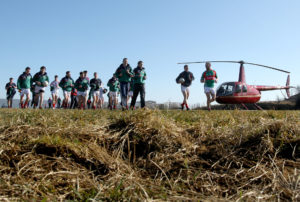 Mayo players walk past a helicopter as they return from their warm-up on the Mulvey Park pitch outside MacHale Park ahead of their 2010 league clash with Dublin. This is part of the area that Mayo GAA chairman Seamus Tuohy wants to see transformed into a state-of-the-art training facility. Picture: INPHO/James Crombie

It’s for that reason that Seamus Tuohy has turned the county board’s attention to developing grounds it already owns adjoining MacHale Park in Castlebar, with the recently appointed chairman outlining a plan in excess of €1m to create two new full-size pitches behind the Albany End of the stadium, one with a 4G (artificial) surface. This, Tuohy told the briefing, will become Mayo GAA’s Centre of Excellence “for the next number of years”.
Describing it as a “big commitment”, the chairman says it makes sense to tap into the infrastructure that MacHale Park already provides, like changing-rooms, catering facilities, gyms and meeting rooms, and that developing two playing pitches would be an immediate response to an urgent need.
“We need more pitches for our inter-county squads, our academy squads, and particularly this time of the year there is pressure on us as a board in providing those facilities,” said the chairman.
“We’re trying to provide pitches for four or five teams at this particular time, and it’s hugely demanding. We need pitches now, not in four or five years’ time.”

Tuohy strongly hinted he was in favour of basing a Centre of Excellence around MacHale Park and that, going forward, separate developments within the divisions could assist the county board in its need for more pitches.
Dermot Butler, in contrast, did feel that Mayo GAA might require something more substantial than what the area adjoining MacHale Park can provide.
“Long-term, we do need pitches. Do we need a Centre of Excellence? We do. But, at the moment, financially, we just don’t have the money for it. And that’s the big problem. I think Seamus is right, the top two pitches in MacHale Park need to be developed, to bring them up to a standard where they can be used nearly all year round,” Dermot Butler said. “That will certainly alleviate the problems going forward, because MacHale Park is not going to be open for training; the amount of money we have spent on it, we want to look after it.” 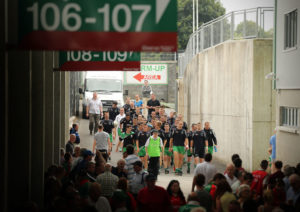 London players make their way back to the dressing rooms after completing their warm-up before the 2013 Connacht SFC final in MacHale Park. Picture: INPHO/Cathal Noonan

Seamus Tuohy wants the project to become the focus of the board over the next 12 months to two years and is ready to open discussions with Croke Park officials and other relevant stakeholders. The thinking is to upgrade the existing Mulvey Park pitch to an all-weather grass surface and that the training area directly behind MacHale Park would accommodate a full-size 4G pitch. €1m might not quite cover the cost, admits Seamus Tuohy.
“That’s quite a sizeable amount of funding to raise. When we do have an agreement on it, we will be putting it to the Cairde Maigheo committee. What are our plans? What kind of funding is required to address those particular issues?
“This is a more immediate problem for us that we need to address.”