Everyone associated with Mayo GAA were saddened to hear of the passing of Pat Gavin this week in New York.

A native of Liscarney, Pat Gavin’s love of the GAA was nurtured in his local GAA club of Westport before he immigrated to New York in the early 1960s. 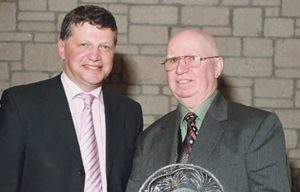 Mayo GAA said in a statement, “Pat, like so many of his friends, found work in the city as a bus driver, but it was in the Mayo GAA Club in the Big Apple where his true leadership and administration skills shone through.

“Pat Gavin’s jovial spirit and unwavering support for his native county never diminished despite being thousands of miles away. Many of the Gavin family trips home revolved around a Mayo championship or league encounter.”

He was honoured by the Green & Red Trust in 2007 for his outstanding contribution to Mayo GAA. His close friend and neighbour Paddy Muldoon (RIP) described Pat at that Gala function as one of the men that the GAA what it is today.

Mayo GAA Chairperson Séamus Tuohy said, “Pat was such a gentleman. He was an ever-present in the Mayo GAA Club in New York. I don’t think there is a Mayo supporter or footballer that went to New York that did not encounter meeting Pat Gavin. He was always a proud GAA man and had a permanent seat at Gaelic Park.”

Pat Gavin was renowned for his encyclopaedic knowledge of New York, It didn’t matter if it was an All-Star footballer or just a neighbour’s child, Pat Gavin was always on hand to collect them at JFK Airport. “There aren’t too many Mayo footballers over the last sixty years that went to New York and did not have Pat Gavin’s number in their back pocket,” commented Tuohy. Pat Gavin was an unbelievable friend to every single Mayo person that went to New York,” commented Tuohy.

Keeping the Mayo GAA Club alive in New York was not easy over the years and Pat Gavin was never found wanting. He held every position in the club and was an outspoken delegate at New York GAA County Board. At Gaelic Park or at Mayo club training in Van Cortlandt Park in the Bronx, Pat Gavin rolled up his sleeves and did what was required to keep the Mayo GAA Club in New York alive. If a pitch needed marking, if an umpire was required or if an extra body was required to stand in the goals Pat Gavin was not afraid to put his hand up.

In 2004, members of the Mayo GAA Supporters Club went on a fundraising mission to America and on return, one delegate told Mayo GAA that Pat Gavin single headedly raised 50% of the money. “He knew everyone in New York,” commented Seamus Tuohy. “He had such a lovely connection with people and everyone had a kind word to say about Pat. He was a true GAA Gael and on behalf of Mayo GAA and all the clubs our county, we wish to send our deepest condolences to his wife Eileen and his family.