Sligo senior football manager Tony McEntee will have a welcomed boost to his panel as Pat Spillane Jr’s transfer to the county has been confirmed. 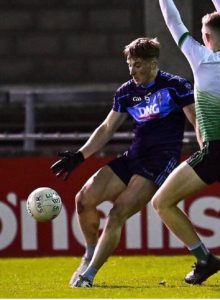 Pat Spillane Jr in action for St. Jude’s in their semi-final win against Lucan Sarsfields in the Dublin SFC last November

The son of namesake legendary eight-time All-Ireland winning father, Pat Spillane Jr has never played for Kerry and will qualify to play for the Yeats County through his mother.

Spillane was a driving force in St. Jude’s journey to the recent Dublin SFC final, as he kicked three points from midfield in their semi-final win over Lucan Sarsfields. However, they lost the final due to a late comeback from Kilmacud Crokes.

Sligo County Board announced the news this afternoon:

“Sligo County Board can confirm that Pat Spillane has joined with the county’s senior football panel following the approval by the Competition Controls Committe of the GAA of his request to field with the county of his mother.

Spillane (23), who is resident in Dublin where he plays for the St Jude’s club in Templeogue has begun training with Sligo’s Dublin based players and will participate in preparations for the forthcoming National League campaign which throws in on Sunday week next (January 30) when Sligo travel to Wexford.”