Moytura are bringing the small ball back to South Mayo

Having ground to a halt in 2014 due to a lack of playing numbers, Moytura Hurling Club is relaunching in 2022 and already has some big plans in motion.

Hurling lovers in South Mayo will have something to look forward to in the new year as there is a new club being set-up in the region.

Moytura Hurling Club is being relaunched in the new year, and players from Ballinrobe, Cong, Cross, The Neale and Kilmaine will be able to play for them.

After an absence from the hurling scene since 2014, the former members of Moytura Hurling Club are planning a relaunch of the club for the 2022 season. 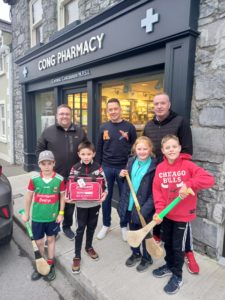 The club is hoping to have underage teams at under-9, under-11, under-13 and under-15 levels. They are also hoping to have minor teams in both hurling and camogie and are planning to field a team in the newly formed Mayo junior hurling championship. Their juniors recently had a training session where 26 players participated.

The club are looking to regroup and rediscover the love of hurling in the area. Hurling has a proud tradition in the locality stemming back to the Cong and Ballinrobe sides of the 1960s and ’70s, which brought about the first founding of the Moytura Hurling Club.

“It was formed in 2005 when a group of local teachers and hurling enthusiasts harnessed the interest in the sport in the area to form the club. The club colours of green, red and yellow were adopted to represent the GAA clubs of the area, with the first players coming from local national schools of The Neale, Cong, Cross, Kilmaine, Ballinrobe and Cregduff.

“The club won many Mayo underage titles throughout the following years, and represented the county at the 2009 and 2010 National Féile na nGael in Laois and Clare respectively. The club also had the privilege of playing in Croke Park in 2009, when the U12 side took part in the Connacht GAA ‘Play & Stay’ day on the hallowed turf.

“Many Moytura players at the time went on to play for Mayo and even Connacht at underage level, but the club ground to a halt in 2014 due to a lack of playing numbers. Now we are hoping to reignite the glory years of a decade ago, and endeavour to enter a team in the newly formed Mayo GAA Junior Hurling Championship.

“At the same time however, we hope to start back the underage hurling coaching which was very successful in the past. Already, interest in hurling is gaining momentum in the local national schools, with coaching and games at U13, U11 and U9 envisaged for the new season.”

The club’s base will be at Ballinrobe Community School’s pitch and Coaching Officer Donie O’Sullivan says the club plan to have their official open day on Good Friday of 2022, which is April 15. Mayo dual star Keith Higgins will be the special guest on the night.

Donie tells the Western People, that the most important thing for the club is not just playing but getting the parents on board.

“We need to get the parents on board, that would be the most important thing. They don’t even have to have an interest in hurling. Even just to bring people to matches and even some can get Garda vetted and do their foundation courses and do some coaching.”

The club chairman Sean McGahon is a Galway man, the treasurer Pat Horgan is a Limerick man, while Donie is from Cork, so the club is being run by hurling people.

“We looked at all the GAA clubs around us, and the Friday evening slot is free, so we are going to train the underage that night. It gives us a chance against the football teams because we will have our own night for hurling,” Donie said.

Donie is from Castlelyons in Cork, which is proper hurling country and he feels that it is an exciting opportunity for the club.

“Where I’m from hurling is absolutely massive. I grew up winning medals with Castlelyons and it is still a great sense of pride for me.

“We were watching this year’s All-Ireland final between Limerick and Cork in a pub in Cong and there was a great crowd watching it. One of the lads said to me – ‘isn’t it an awful pity, we have no hurling club in this part of the county?’, and it really got me thinking.

“It is very exciting because we are entering into the Mayo Junior Championship with Claremorris, Ballina and Westport, there will be eight teams in it all together. If you get one or two league wins in the lead into the championship it would really get the ball rolling for us.”

Local sponsors have also come on board with the club, which is a massive help.

“It makes a massive difference when local businesses rally behind you, especially when you are a new club,” says Donie.

“Mayo GAA Games Promotion Officer Adrian Hession has been into the schools doing seven-week courses with them on hurling. He has done Cong, The Neale and will be doing Ballinrobe and Kilmaine soon, this will be huge in drumming up interest.

“I have had people from Clonbur asking me about playing because their nearest club is so far away. There would be no problem with them planning, they will just have to sign forms to play across the county border.”

As well as being chairman, Sean McGahon will also be the junior team manager. They will be starting back in January and new members are more than welcome.

Having such a big catchment area, hurling could take off like a runaway freight train in South Mayo.