Dublin by birth, Mayo by the grace of God 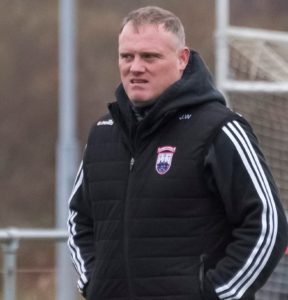 John Walker, the public relations officer of Mayo GAA County Board, has been reflecting on his own experience with cancer, having undergone surgery early last year to remove a lump from his face.

By Anthony Hennigan
This time last year John Walker carried a worrying secret.
Diagnosed with cancer of the parotid gland, only his very closest family knew. Christmas had been a low-key affair at the Walker homestead in Cill Ghallagáin, that townland tucked tight to the wild Atlantic in the northwest corner of Cill Chomáin parish.
John was given two options for treatment – surgery or chemotherapy. Seven hours under the knife and the risk of facial paralysis was worth taking, he reckoned. The chemo road held little appeal. And so, in the first week of February he checked out of a Galway hospital with an incision from the butt of his left ear to his chin – and the weight of the world lifted off his shoulders.
“I’ve a small bit of nerve damage but if that never comes right it’s a small price to pay. You could pull me by the ear now and I wouldn’t feel it,” laughs the public relations officer of Mayo GAA.
“I was bad for a month after the operation, not sleeping well, in a lot of pain, tightness, and then I got an infection which put me back into hospital for another full week, but I feel very lucky,” he assures.
The parotid gland sits just in front of the ear, one on either side. Their job is to produce saliva. A small lump had developed on the left of John’s face, the sort another person might not bother to have checked at all. But as his GP told him, it’s that failure to investigate which often allows cancer to spread. In other words, early detection is crucial.
First diagnosed on December 16, 2021, just three days after his election as Mayo GAA’s PRO, and receiving the ‘all clear’ last June, the remarkable thing is that John Walker had – and this is meant in the nicest possible sense – hardly been missed by the County Board. You see, the GAA had until then spent much of 2021 in lockdown so whatever board business needed attending to, John was able to fulfill his duties online. Nursing a pregnant ewe from a laptop in a hospital bed isn’t quite so easy, however.
“We’ve a small farm and we were in the thick of lambing season when I had the operation. I was worrying about that but in fairness to David (John’s son), he’s a great man around the farm and everything went well for him. He’d ring and tell me everything that had lambed and what was going on.”
Displaying remarkable powers of recovery, by September John Walker was back doing what he had been best known for long before joining the executive committee of Mayo GAA, when officiating at a number of games in the club championship.
“My consultant’s take on things was that if I thought I was able for it, do it. If not, don’t.
“I got out there but didn’t feel 100 per cent, I had lost fitness, some of the medication had bloated me, so I stepped aside at the quarter-final stage. But I’m sixteen years a ref now and my target is to take charge of the county senior final in the next couple of years,” Walker admits. Considering he refereed the junior final in 2015 and the intermediate final in 2018, it would seem a natural progression for the Cill Chomain clubman.

Born and raised in Dublin, every summer of John Walker’s childhood had been spent in Glenamoy, the birthplace of his mother. His city-born father also had family links to Ballina, Lacken and Blacksod so this county held a very special place in young John’s heart – so much so that 22 years ago, at a time when many contemporaries headed in an opposite direction, the 20-something Dub headed west to make Mayo his home. He’s part of the furniture now, married to Fionnuala and dad to 18-year-old David. 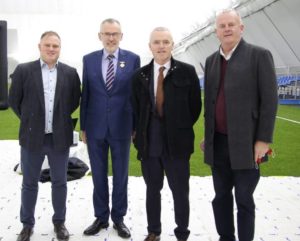 But something even those who have gotten to know John Walker very well might not be fully aware of is his pedigree as a footballer. A former member of the Dublin minor football panel, he was still a teenager when drafted into the senior squad of a Thomas Davis’ side that had just won back-to-back Dublin senior football championships in 1989 and 1990. Not only did they complete a three-in-a-row with John Walker now in the panel, but he is also the holder of a Leinster senior football medal after the Tallaght-based outfit went on to retain their provincial crown. That 1991/92 season ended with an All-Ireland Club final appearance in Croke Park where Thomas Davis’ were narrowly beaten by Dr Crokes of Killarney.
“Former All-Star Paul Curran was a big mentor of mine in the club, at under-16, -17, -18. He was one of the reasons I got into the senior panel. I didn’t play championship but played a few league games and it was great to be part of that team,” recalls John. It was a Thomas Davis’ side that also featured Achill natives Sean Grealis, the current Mayo minor manager, and Joe Fadian. Both played in that 1-11 to 0-13 defeat to Crokes.
Walker’s own playing career was book-ended by a historic first-ever Mayo junior championship title win for Cill Chomain when they swept aside Castlebar Mitchels in the 2005 county final. One year later and the player had turned referee. He’s never looked back.
“No disrespect to anyone but there’s lads taking up refereeing who haven’t played the game. I believe you have to be an ex-player. It’s very difficult for any lad to come in and take it up if they have no skill in the game, that’s where I think the downfall in the GAA is.
“You have to be able to deal with players. Players will go out and play football if you play with them. That’s the way I feel. It’s easier to ref a game when you’re a past player,” says Walker, adding that Mayo GAA has a major problem on its hands because there are so few people willing to take up the whistle. The main reason, he believes, is the amount of abuse endured by the men in the middle.
“It’s a thankless job. I understand there’s a lot at stake for teams but someone has to lose. A lot of blame goes on the referee which I think is unacceptable.
“Everyone at a game is seeing the action from a different angle, the referee included. You’re on the pitch. We’re not going to get every decision right, as referees we’re not all perfect and we’ll always make a mistake,” accepts Walker who recalls one experience in particular from which he took great learning.
“I had a dreadful game, it must be about ten years ago, a North minor final between Crossmolina and Knockmore. I didn’t have a great day at the office, I put my hands up, but I still got on with it. I got a bit of hassle. It got out of hand between the managers on the sideline. Crossmolina won the game at the end.
“Maybe my fitness wasn’t up to scratch that time, that was a lot to contribute to it. But I’ve learned a lot and I’ve come on a lot over the years. I’ve developed myself well. I’ve had no major issues since that game but a referee will always make a mistake and I’ll always put my hand up if I do,” he stresses.

The lack of fresh blood in the Mayo GAA referees’ pool is becoming an increasing concern, John Walker explains.
“They have a problem trying to get refs to fill here and there. Lads are injured, lads opt out, every year there’s lads retiring.
“Even the age profiles, there’s not many youngish referees like myself in their 40s. Something will have to be done this year to encourage lads to come in because it’s going to get serious otherwise.
“You’d get clubs giving out about referees and ringing up the board saying they don’t want this fella or that fella coming to the club, that he was bad last week, or he was this or that, but I’d encourage every club in Mayo to put a representative forward to become a referee. There’s not enough clubs with referees and yet they’re giving out about the rest of them.” 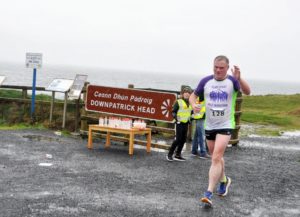 John Walker gives the thumbs up during his taking part in the Ceide Coast half marathon a few years ago in Ballycastle.

An employee at Ballina Manor Hotel, John Walker is launching into his second full season as the PRO of Mayo GAA. The workload of the position has increased considerably over the past decade given the outlet of social media which has allowed the County Board to advertise and self-promote its wares but fortunately, there is a six-strong PR committee to assist in all the different jobs to be done.
His journey from Cill Ghallagáin to Castlebar for meetings is exactly an hour and fifteen minutes, says Walker, five minutes longer during summer on account of the tractors he’d be guaranteed to meet along the way.
“You become accustomed to it. Winter is the worst, January and February, they’re the worst meetings to have to go to, because that road from Bangor to Castlebar on a bad night, it’s not good. You could have a meeting for two hours, leave at ten or half ten and have to travel back down that road again. Home at near midnight and up again the next morning for work.
“I heard Liam Moffatt calculate his hours at about 40 hours per week when he was chairman. I’ve never really done it myself, but it’s easily 30 hours on PRO work alone. Without fail you have around a dozen emails to deal with every day.
“Some people do say, “Jeez Walker, how do you do it? How do you fit your work in and do the odd bit of refereeing and PRO work as well?”
When you’ve confronted what John Walker had to confront this time last year though, nothing could give a better perspective to what hard work really is.