Last night, the whole country was blown away by Caoimhe Ní Fhlatharta and Séamus Ó Flatharta’s performance of ‘Anach Cuain’. The song was sung in honour of the late Ashling Murphy, who was murdered while out jogging near Tullamore during the week.

The performance really struck a cord with the entire nation.

There is tragedy behind this sean-nós. The poem is called ‘Anach Cuain’ and it was written by Kiltimagh-born poet Antoine Ó Raifteiri.

It is about a tragedy that took place in Lough Corrib in 1828. On September 4, 31 passengers left from Annaghdown Pier to travel to Galway, which was an eight mile journey, on an old row-boat that was in “rotten and leaky”, called the Caisleán Nua. They were all to attend a fair in Fairhill that day.

About two miles out from the city around Bushy Park, it is believed a sheep became restless and put its hoof through a plank. Somebody tried to plug the hole, but proceeded to knock the plank out of place, causing water to rush on board. 19-20 died drowned in what became one of the worst drowning events in Irish history.

A man on board, John Cosgrove, helped save two women from drowning, but was pulled under attempting to save a third. 12 people survived. 150 years later, in 1978, divers discovered the Caisleán Nua near Menlo Pier.

Today, there is a memorial at Annaghdown Pier which commemorates all who passed away on September 4, 1828. A fascinating but tragic story. 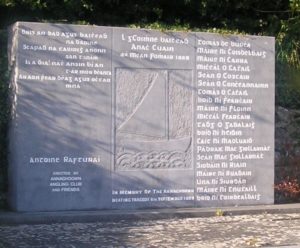