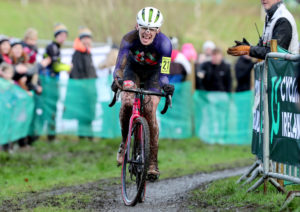 Mayo native Maria Larkin made sure the long journey back from the US for last weekend’s Cyclocross National Championships was worth her while when she successfully retained her senior women’s title.
Originally from Balla, Maria has been based in Chicago for almost 10 years where she first got involved in the sport that she previously described as a cross between cross-country running and steeplechase.
Different to mountain biking, the competitors cycle through mud, sand, and grass on parkland circuits and occasionally must dismount to overcome hills and other obstacles.
Taking part in the Irish championships last Sunday, Maria defended her crown in Armagh City Palace Demesne, holding off the challenge of Darcey Harness and Roisin Lally.
“I’m really, really, really happy. When you’re coming up to the race its quite stressful and everyone is so strong that you just never know. Putting a good race together on a day like today is just really really hard, anything can go wrong,” said a delighted Larkin afterwards.
“It was a really brutal course, just running, mud, but then also it was quite technical in sections which I really liked.”
Larkin, an architect by profession, left DIT for America during the construction collapse and made Chicago her home in 2012, but has been a regular on the Irish cyclocross scene since 2015. The difficult conditions on Sunday meant there was lots of running involved for all the entrants. 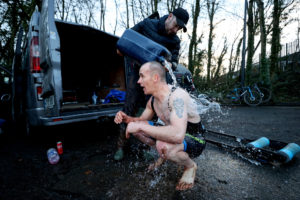 Declan Gallagher helps Anthony Murray of Westport clean off after the senior men’s race in which Murray finished 14th.

“I actually liked the running sections; I like getting into a rhythm. A lot of people hate the run and I find if you make that one of your strengths that you can really take advantage of it. But I didn’t have a clean race, I crashed twice. I caught my handlebars in the side tape because you had to ride so close to the edge of the course. It wasn’t about riding a perfect race it was about riding as good a race as you can.”
There was other Mayo interest on the day, with Anthony Murray of Westport Covey Wheelers CC finishing 14th out of 27 starters in the senior men’s race. Shaun Barnicle of the Western Lakes club was three places further back. The event was won by first-time champion Chris McGlinchey.
There was a podium finish for Mayo’s Niall McLoughlin who took third in the junior men’s race. McLoughlin is another member of Westport Covey Wheelers.