“It’s only the FBD League”, they said! 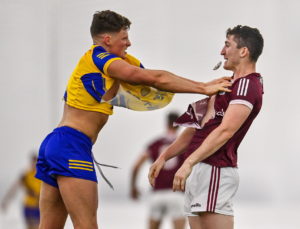 Conor Cox of Roscommon and Johnny Heaney of Galway getting shirty with each other during the Connacht FBD League Final match at NUI Galway Connacht Air Dome in Bekan. Picture: Sam Barnes/Sportsfile

Neither team was quite at full strength but the footballers of Galway and Roscommon spared nothing in their efforts to lift some early season silverware at the Connacht GAA Airdome on Friday night, when playing out a hard-fought match in the final of the FBD Connacht Senior Football League.

It was the Tribesmen who picked up their 10th title in all, with a 1-18 to 1-16 victory, having trailed by one point half-time despite scoring the only goal of the first-half.

The Rossies had Mayo native Paddy O’Malley between the sticks and raced into a 0-8 to 0-4 lead before a 25th fisted goal by full-back Sean Fitzgerald sparked Galway into life.

Robbie Finnerty and Paul Conroy were among their leading lights in attack and yet it was Roscommon, despite lining out minus their Padraig Pearses and St Faithleach’s players, who still held a 0-10 to 1-6 advantage at the interval.

Galway made their move, however, early in the third quarter, by scoring the first points of the second-half inside ten minutes. 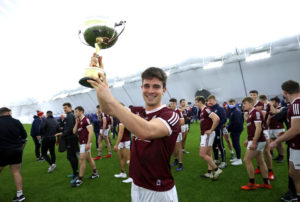 Points by Enda Smith and Paddy O’Malley, from a ’45’, did regain the lead for Anthony Cunningham’s team, but that was only a short-lived thing as converted frees by Finnerty and substitute Shane Walsh helped give Galway a four points start entering the final quarter.

A 58th-minute goal by Roscommon stalwart Enda Smith reduced the gap to two points, 1-14 to 1-12, but that was as close as Roscommon could get, with another of Galway’s substitutes, Cathal Sweeney, contributing a couple of crucial points before full-time.