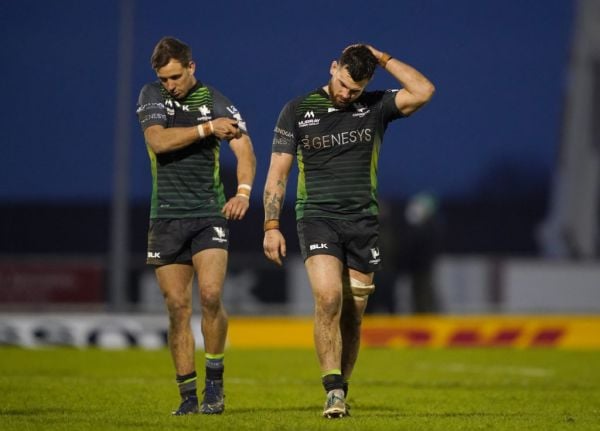 Hosea Saumaki’s last-minute try completed a memorable 19-point comeback from Leicester Tigers as they edged out Connacht 29-28 in a Heineken Champions Cup cliffhanger at the Sportsground.

This nine-try thriller ended in a chorus of boos from the home fans but replays showed replacement Saumaki did not have a foot in touch as he put Tigers through to the knockout rounds.

An early Leicester surge, which saw Joe Heyes and Kini Murimurivalu both touch down, was eclipsed when Connacht hit back to lead 14-10 at half-time.

Captain Jack Carty converted scores from Tiernan O’Halloran and Cian Prendergast, and Tom Reffell’s early second-half yellow card was punished by seven-pointers from Kieran Marmion and O’Halloran for a 28-10 scoreline.

However, the Gallagher Premiership leaders rallied superbly, completing a pool double over the stunned westerners thanks to closing tries from Murimurivalu and the newly-introduced Charlie Clare and Saumaki.

Matthew Burke from Ballinrobe was in Connacht’s front row with Ballina man Dave Heffernan summoned from the bench in the second-half.

A dominant start had Tigers 10 points up in as many minutes, their robust set-piece play setting the tone. They went close from a maul before prop Heyes plunged over in the second minute.

The visitors struck again when Freddie Burns used scrum possession to kick out wide for Fijian Murimurivalu to crash over past O’Halloran.

However, Burns missed both conversions and Connacht, who had a penalty miss from Carty, suddenly burst into life on the quarter-hour mark. A good forwards drive took them into the 22 and Murimurivalu was exposed in midfield as Matt Healy sent full-back O’Halloran in beside the posts.

The home side’s persistence paid off in the 27th minute, a brilliant Bundee Aki offload putting Prendergast over and Carty converting.

Having absorbed some late Leicester pressure before the break, Connacht were quickest out of the blocks on the restart.

Flanker Reffell was sin-binned for offside before Marmion wriggled over from close range, Carty making it 21-10.

Nonetheless, once back to their full complement, Tigers clawed it back to 28-17 thanks to a hard-earned Murimurivalu effort, the attack sparked by a Wiese turnover. Burns added a terrific conversion.

Connacht scrambled well to hold up both Reffell and Ellis Genge but Tigers, stung by losing their unbeaten record to Wasps last Sunday, had more in the tank.

Having been previously penalised for obstruction at a maul, they got it just right to propel hooker Clare over in the 71st minute with Burns also converting.

That gave Steve Borthwick’s men their bonus points but they ended up with the maximum haul as Dan Kelly’s long pass exposed a tiring defence and Saumaki finished well in the left corner.