Is it time Mayo GAA had league venue rethink? 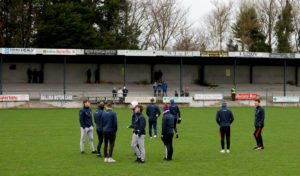 By Anthony Hennigan
As it stands only 5,000 spectators will be allowed into Markievicz Park later this month to watch Mayo and Donegal contest their opening round game in Division 1 of the 2022 Allianz Football League on January 30. That’s because of the current cap on attendances at outdoor sporting events which limits the number of persons allowed into any ground at 50 per cent of the venue’s capacity, or 5,000 attendees, whichever figure is the lower.
The game is scheduled for the Sligo venue on account of the resurfacing work that has rendered MacHale Park in Castlebar out of bounds for another three or four months. Similarly, the plan is that Mayo will play their other ‘home’ league games at Hyde Park, against Armagh, and Carrick-on-Shannon, against Kildare. However, there is a growing suspicion, due to the record case numbers of coronavirus in the country at present, that the proposed date of January 31 to lift the restrictions on outdoor attendances will be pushed back further. How far back is anyone’s guess but the hope would be that by the time of Mayo’s second ‘home’ game, on Sunday, February 27, more than 5,000 punters would be allowed into the Hyde for their clash with the Orchard County. But you couldn’t bet on that at this stage. Ireland are due to host Italy that same day in Round 3 of the Six Nations Championship and the IRFU has already voiced its concern about the implications of imposing a 5,000 capacity on the Aviva Stadium. Rugby’s top brass already have a dreadful fear that their Six Nations opener against Wales on February 5 will fall victim to an extension of the capacity restrictions, meaning 45,000 empty seats.
The question I suppose I want to pose is this: Is it actually right that Mayo would still choose to play Donegal in Markievicz Park for the sake of accommodating a crowd of 5,000 people?
Galway chose to sell out Duggan Park for Henry Shefflin’s first game as manager of the senior hurling team against Offaly last Sunday when they could easily have moved the match into Pearse Stadium and sold 5,000 tickets as opposed to the 3,000 that fitted into Ballinasloe, a venue that is seen as the county’s spiritual hurling home. Some things are worth more than money, like the goodwill associated with keeping things local.
For the sake of selling a couple of thousand extra tickets, would it not be better at this stage for Mayo to play Donegal in Ballina? Granted, it’s no mammoth distance to Sligo but you’d be shortening the road trip nonetheless, plus the Mayo players will be more familiar with playing in James Stephens Park than the opposition, and above all else the few thousand fans on Moyside would be supporting local businesses that have been scrapping for dear life just to stay afloat during this Covid-19 pandemic, not to mention the few hotel beds that travelling Donegal supporters might occupy for a night. 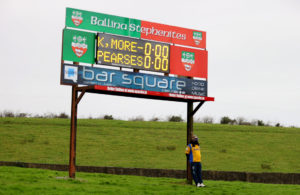 A Knockmore fan at the game in Ballina last Sunday. Picture: INPHO/James Crombie

Ballina Stephenites GAA Club has proven itself supremely competent at hosting games of this scale, be it the county senior football final a couple of months ago or both of Knockmore’s Connacht championship matches since, last Sunday’s final included. But the waters are muddied somewhat by exactly what is the capacity of James Stephens Park.
The Western People understands that around 1,800 tickets were put on sale by Connacht GAA Council for the clash of Knockmore and Padraig Pearses. If that represents 50 per cent capacity, it doesn’t tally with the attendance that club sources in Ballina say was admitted into James Stephens Park for the county final clash of Knockmore and Belmullet. They’ll tell you around 4,500 tickets were scanned at the gate that day – and that doesn’t include all the extra people, volunteers, stewards, press etc., who were also admitted to the ground. They’ll also tell you in Ballina that 4,500 falls short of what James Stephens Park was previously cleared by health and safety officials to host, when the club ordered its own audit of the ground.
In any event, would it still not be a better thing all round, even if based on an attendance of around 2,000 spectators, and at a time when an entire country seems to be advised to curb its movements where at all possible, that Mayo stay in Mayo to play their first match of the 2022 National Football League?
In a division where points are going to be exceptionally hard come by, it might just be the best decision they make all year.