Confusion remains over Oisin Mullin’s move to the Geelong Cats in the Australian Football League. 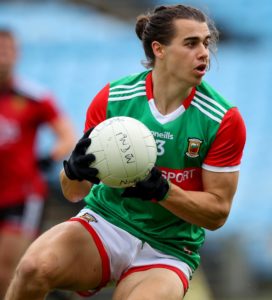 Kilmaine and Mayo footballer Oisin Mullin had been expected to make the move to AFL side Geelong Cats. Picture: INPHO/Ryan Byrne

It was announced in November that the Mayo and Kilmaine defender, and two-time Young Footballer of the Year, had agreed a rookie deal with the AFL club.
Some initial doubts over the move were further dispelled in early December when Geelong confirmed Mullin as among their off-season signings ahead of the 2022 season, with Mullin given the number 34 jersey on the Cats’ official website.
However, it is understood that Mullin, who has already played in two All-Ireland senior football finals since his championship debut in 2020, is yet to travel to Australia to join up with Geelong.
A question on Oisin Mullin was put to Mayo manager James Horan in an interview with the local media after last Friday night’s FBD Connacht League clash against Galway at the Air Dome in Bekan, with Mayo GAA PRO John Walker interjecting to say that: “We can’t comment on that at the moment, there are family reasons.”
When Horan was asked if he had anything to add, the manager stated: “It’s just a difficult situation and Oisin and his family deserve the time and space to work through it.”
The 2022 AFL season is due to begin on March 16, with Geelong set to host Essendon at the Melbourne Cricket Grounds in Round 1 on March 19.
AFL clubs began their pre-season training yesterday (Monday) with a number of teams, Geelong included, taking to social media to post pictures of their first pre-season sessions of the new year.