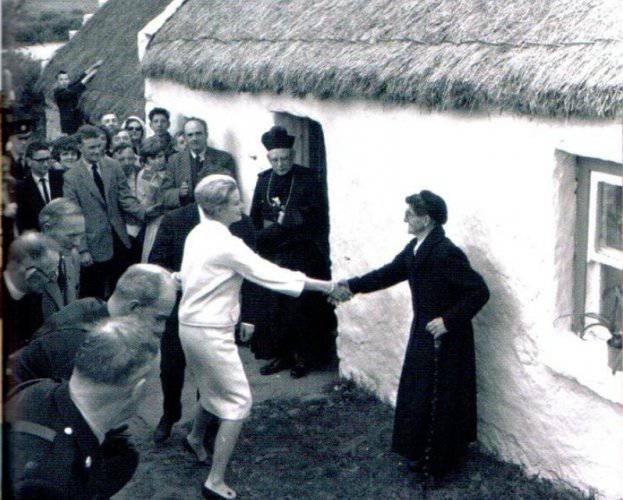 Grace Kelly visits Newport in 1961 – she visited the old cottage where her grandfather had lived.

Sixty years ago, the eyes of the entire nation were on west Mayo when Princess Grace of Monaco returned to her ancestral home.

It was Thursday, June 15, 1961, and Westport was thronged with people eagerly awaiting a chance to see the Princess and her husband Prince Rainier III, who were on a visit to Ireland.

Grace Kelly was a famous Hollywood actress from Philadelphia. Known for her stunning looks, she starred in some classic films throughout the 1950s, and although her acting career was brief, she made a lasting impact.

She acted in High Noon (1952), and High Society (1956), but is more well known for working with legendary director Alfred Hitchcock on three of his classic films Dial M for Murder (1954), Rear Window (1954), and To Catch A Thief (1955). She won an Oscar for Best Actress in a Leading Role for The Country Girl (1954) and starred alongside some of the best actors of the era including Clark Gable, Cary Grant, James Stewart, Bing Crosby, Alec Guinness, William Holden, Ray Milland, Gary Cooper and Frank Sinatra.

In 1955, she married Prince Rainier III of Monaco and made the decision to retire from acting at the age of 26 to focus on her royal duties.

Princess Grace came from an affluent family in Philadelphia but they had humble roots. Her father Jack Kelly was a multimillionaire property developer and won three gold medals representing the US in rowing at the Olympics. His father, Grace’s grandfather, was John Henry Kelly, an Irish man who emigrated from Newport to Philadelphia in the 1860s.

Six years after her marriage, Princess Grace came back to her roots when she visited Newport and Westport, along with other places that had links to her Irish ancestry.

The Prince and Princess spent a few days in Dublin where they attended gala dinners, visited Crumlin Children’s Hospital and met then-President Éamon de Valera and his wife Sinéad at Áras an Uachtaráin. Then it was time to cross the Shannon and visit her ancestral home.

There was huge excitement and a lot of preparations put in place for the day, as the Western People’s edition of June 17 edition revealed:

10am: The Royal Party will leave Ashford Castle, Cong.

10.20am: They will arrive at Partry where they will meet his Grace Most Rev. Dr. Walsh, Archbishop of Tuam.

10.45am: The visitors will arrive at Croagh Patrick. The journey from Partry will be by the way of Killawalla.

11am: Accompanied by Most Rev. Dr. Walsh the Rainiers will arrive at the Presbytery, Westport.

12.15pm: The party is expected to arrive in Newport for lunch in Newport House Hotel. While in Newport it is expected that Princess Grace will visit the cottage of Drimurla where her grandfather lived before his departure to America 100 years ago.

Extra Gardaí were drafted into Westport to help make sure that the day went as smoothly as possible. Banners, bunting and decorations were put up in both Newport and Westport. The Westport Brass Band were to meet the Royal Party at Croagh Patrick and follow them into town, while at Newport the St Muredach’s Brass and the Reed Band, Ballina were to meet them on the outskirts of the town and bring them to St Patrick’s Church where they would meet local clergy and the local people.

The sheer excitement and anticipation had completely enveloped the region and it was a day no one would forget.

“This was more than a visit to County Mayo,” reported the Western People on June 24. “It was the nostalgic return of an Irish-American to the land of her ancestors. It was a return that gave meaning to all the confusion bordering on chaos that had gone before in a wild and wonderful week in Dublin. It was Thursday and the great day was at hand. All was ready.

“At 10.35 the royal couple came over in a two-tonne Humber car. On seeing the Archbishop the party halted and the princess and her husband got out. Greetings were exchanged and His Grace entered the car with the princess and the prince and the journey to Croagh Patrick began. The royal party were preceded by a Garda squad car and followed by 70 cars carrying reporters, cameramen and TV cameramen.” 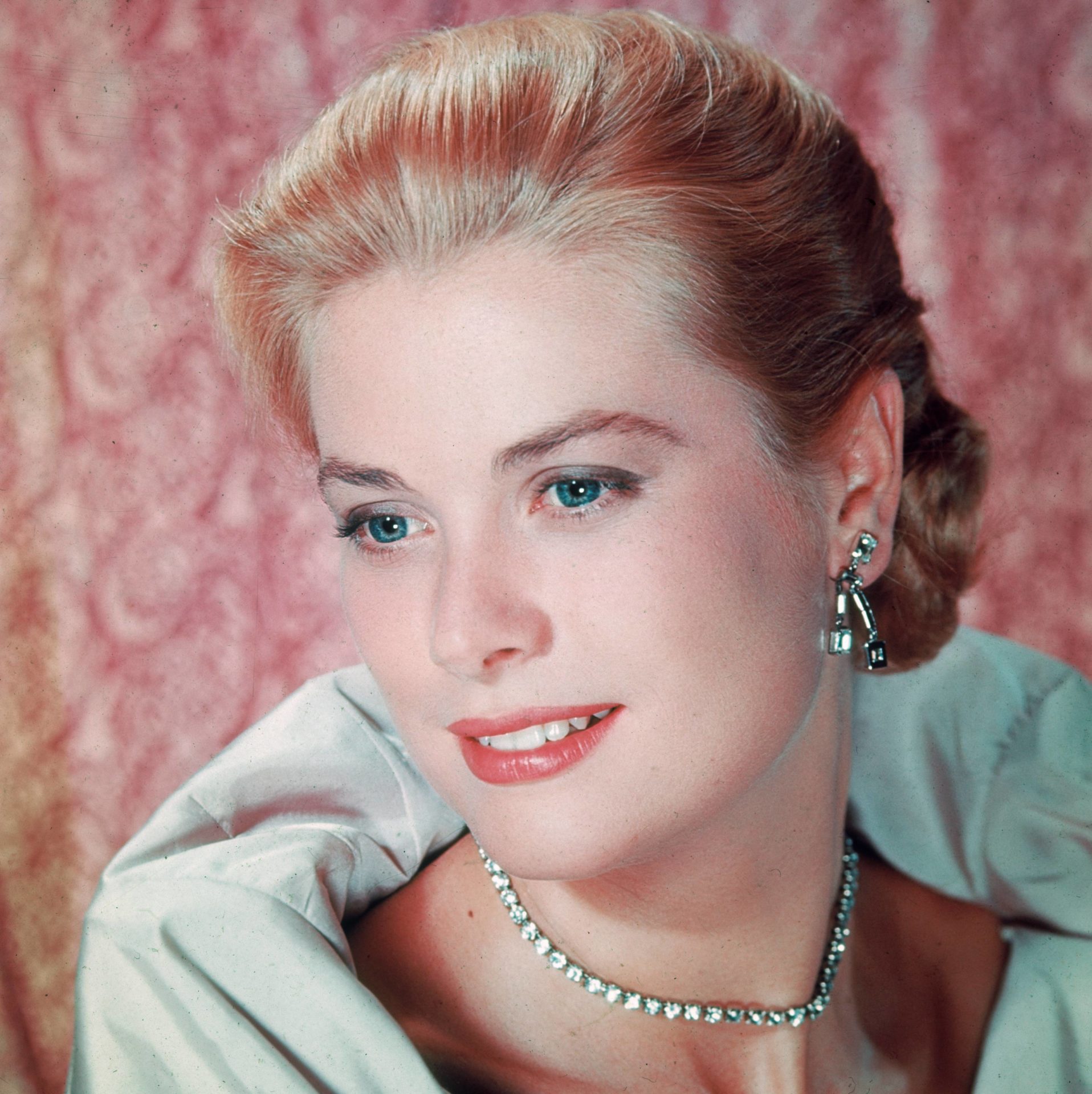 From Croagh Patrick, they went to Killawalla, where the princess visited the birthplace of her grandmother, whose maiden name was Costello. They were met by enthusiasm as pupils from Knockrooskey national school lined the streets and waved flags until they got to Westport.

“Crowds choked the streets of Westport. Sightseers lined the footpaths, craned from windows, and some even scrambled to the top of the trees on the Mall to catch a glimpse,” reported the Western.

Cries of ‘céad míle fáilte’ rang out and Monaco flags were waved as the royal party went through the town. Princess Grace had a special welcome for 69-year-old Patrick Walsh of Seaview, Burrishoole, who knew her father for 15 years. Mr Walsh told the Western People: “She is definitely very Irish – and she is proud of the fact. But sure she could not be anything else. Her grandfather was one of the most respected men in this town.”

In the Presbytery in Westport, Princess Grace met over 40 of her cousins at a special ceremony. Her 22-year-old cousin Anthony Kelly presented her with a jewelled casket on behalf of her relations in Westport and Newport.

The casket was of Connemara marble mounted with silver and lined with polished bog oak. It was designed by Simon Kelly, architect, Galway, a son of a third cousin of Princess Grace.

After leaving Westport, Princess Grace headed towards Newport, where she was met with an almighty welcome and had lunch in the Newport House Hotel. After her lunch, she told the Western People that she and her husband didn’t expect to get such a welcome.

“We are very happy to be here. The people are so warm and enthusiastic. We have been deeply touched by that. We did not expect such a welcome.”

From there, Princess Grace left Newport and went to her ancestral home, Drimurla, a 200- year-old thatched cottage in which her paternal grandfather grew up.

“It is a memory I shall always treasure. My only regret is that my father could not have lived to be here with me,” Princess Grace said at the cottage.

She and her husband were both deeply touched by the occasion. They stayed and chatted with the cottage’s owner Ellen Mulchrone for 35 minutes. The day had been a busy one for Mrs Mulchrone, as the 68-year-old widow spent the morning making sure the cottage was spic and span. She was also baking griddle cakes and polishing the glassware and china for her visitors.

“It was the greatest day of my life,” Mrs Mulchrone said.

Princess Grace sat with Mrs Mulchrone, sampled her griddle cakes and drank a cup of tea. As they left after chatting over old times, the Princess said to her host: “You are wonderful and we have had a lovely tea. I hope to be able to come back to see you again.”

Over the course of the weekend, Princess Grace and her husband spent time in Mayo, revisiting Westport for a second time on Saturday morning. They went fishing in Clew Bay, where she caught a 4lb dogfish and 7lb skate, and visited relatives on Inishcuttle Island.

Both Princess Grace and Prince Rainier III said that their visit to Mayo was the favourite part of the trip and that they would love to return again for a holiday.

Princess Grace returned twice more and bought the Drimurla cottage in the process. In her third and final visit in 1979, she revealed her intention to build a holiday home beside the family cottage, but fate wouldn’t allow it as she suffered a stroke while driving and crashed in Monaco in 1982, passing away that evening.

Her son Prince Albert II returned to Drimurla in 2011 to mark the 50th anniversary since his mother first visited. Six decades later, Princess Grace of Monaco, or more simply Grace Kelly, is still the pride of West Mayo.