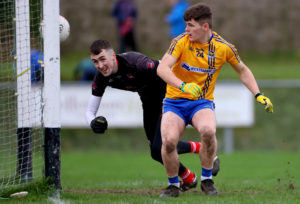 Knockmore’s hopes of collecting a fourth Connacht senior football title were dashed by an impressive Padraig Pearses outfit in Sunday’s provincial decider in Ballina. And although it was hard to deny the best team won, Knockmore will be full of regret to have lost by only two points having kicked fourteen wides compared to the opposition’s two.

Pearses, who were winning their first-ever Connacht title, also had the lift of scoring a penalty in only the third minute, and it gave them a lead they were able to nurse between there and the full-time whistle, which blew on a 1-13 to 1-11 score-line.

Pearses had actually led by seven points at one stage of the third quarter, however, a spirited fightback from Knockmore provided the maximum 1,800 spectators a grandstand finish, with Aiden Orme, the Mayo side’s best player on the day, whistling a goal chance over the crossbar in the very last play of the game.

Padraig Pearses led 1-3 to 0-4 at half-time despite losing goalkeeper Paul Whelan to the sin-bin for ten minutes, and it wasn’t until the third minute of the second-half that Peter Naughton became the first Knockmore forward to score from play. However, a sensational display of kicking by Pearses corner-forward Paul Carey, who scored five points in the twelve minutes directly after half-time, helped push the visitors into a 1-9 to 0-5 lead and in truth, the result looked set in concrete. 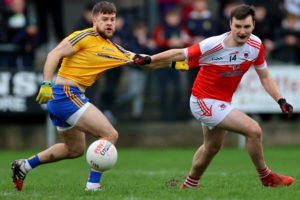 Having lost Kieran King to an injury in the first-half, the introduction of Mayo attacker Darren McHale caused an upswing in Knockmore’s fortunes, and after points by Orme and Naughton, it was McHale’s delivery that allowed fellow sub Charlie Bourke punch to the Pearses net and reduce the margin to two points with all of the fourth quarter still to play. But the teams evenly shared the final eight points of the game thereafter, meaning it was Padraig Pearses who became the fifth Roscommon side to become senior champions of Connacht – and first since St Brigid’s in 2012.