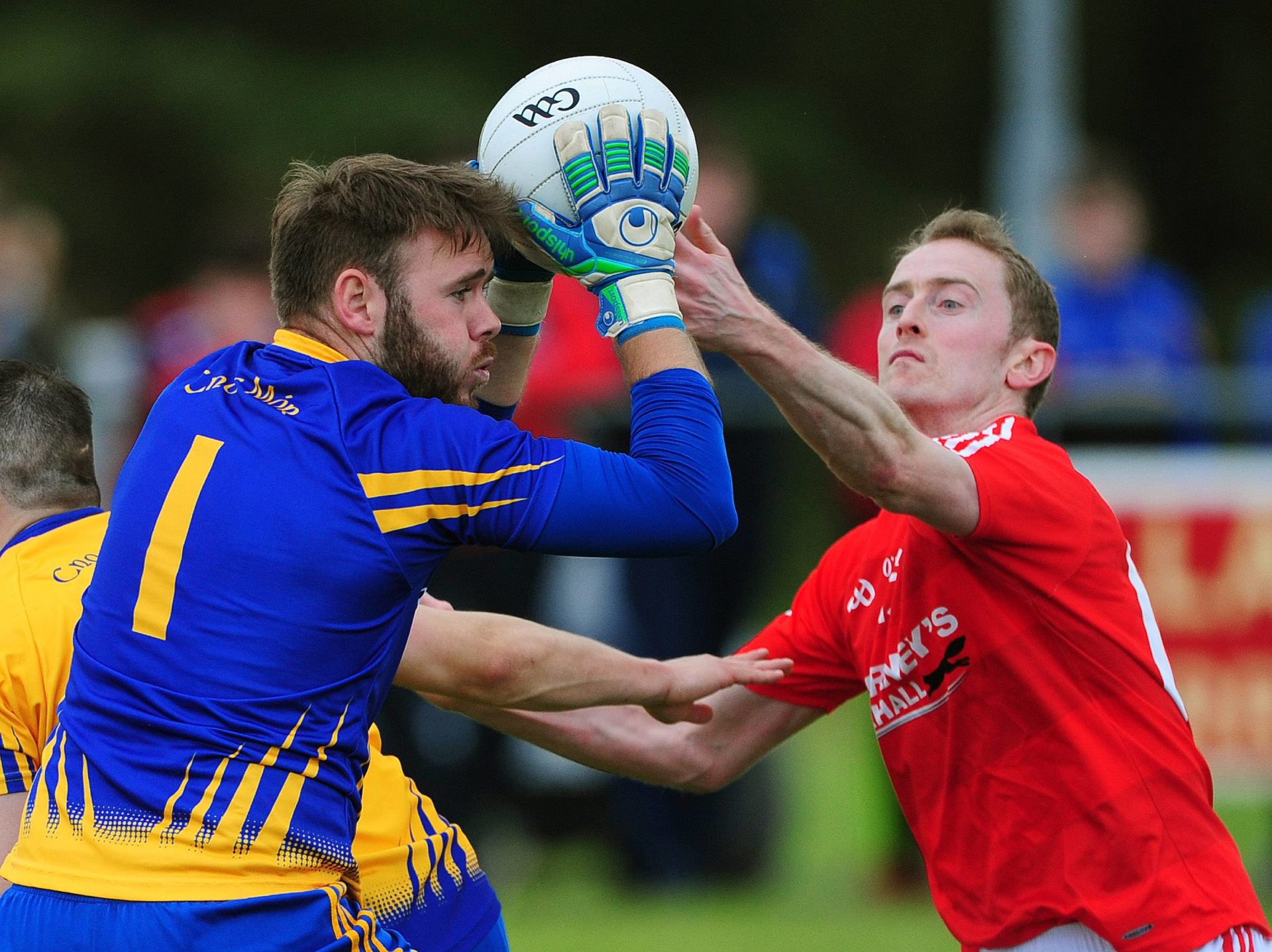 After playing senior football for Knockmore for 16 seasons, Aidan Kilcoyne made the difficult decision to bow out just before the club won back-to-back county titles. But as he tells Mark Higgins, the former Mayo forward has no regrets

Few players have given more to the Knockmore cause in the 21st century than Aidan Kilcoyne. For his 16 seasons in senior football, Kilcoyne was one of the shining lights for the Parish of Backs, first as a quicksilver forward who was talented enough to play seven seasons of inter-county for Mayo and latterly, after a freak knee injury while warming up for a county quarter-final in 2013, as a goalkeeper.

Kilcoyne played his last season for Knockmore in 2019; one year later, the North Mayo club won their first county title in over two decades, and then backed it up with another one in 2021. As they head into this Sunday’s Connacht Club SFC final against Padraig Pearses in Ballina, Kilcoyne said that he does still sometimes wonder whether he could have squeezed out just one more season to get hold of a county medal.

But for the most part, he’s happy with his lot, watching the club he loves, sharing in their successes and focusing on his new role as a goalkeeping coach with the Longford senior footballers.

Kilcoyne has a level of insight into the Knockmore story that is probably unmatched by anyone else outside the walls of the dressing-room. He said their march through to this weekend’s Connacht final has arguably been even more impressive than 2020’s breakthrough, given the adversities they have had to deal with along the way.

“They’ve played like a team who had won last year,” offers Kilcoyne this week. “They’ve been so impressive, they’ve managed games so well, without necessarily hitting the heights of how well they played last year. They’ve done enough all the time, they’ve been so clinical.

“They’ve played in fits and starts; they probably haven’t put in that consistent hour-long performance that we would have seen last year, in the likes of the Ballintubber game or even the county final.

“But they’ve nearly been even more impressive this year, in that they’ve struggled with injuries, they’ve had to deal with a black card in nearly every game. Some lads maybe haven’t been at the levels they might have been at, but others have really stepped up. They’ve shared the load really well.

“Different players have stepped up in key moments on different days and pushed them over the line. You think of James Ruddy’s goal in the county final, when he wasn’t even seen last year.

“In order for them to win the next day, they’ll have to play for longer than the 10 or 15-minute bursts here and there that we’ve seen so far. I’m expecting and hoping to get that more rounded, 50-60 minute performance. If they can do that and pull a performance together, I’d give them a really good chance.”

Knockmore have had to cope with injuries to key players like Darren McHale, Alan Stadler and Keith Ruttledge over the course of the season, but Kilcoyne said the depth that manager Ray Dempsey has instilled in the playing panel over the last couple of years has been crucial in that regard, with new leaders emerging to carry the team forward.

“Pearse (Ruttledge) has been incredible this year, one of the most consistent performers in their championship campaign. He’s been to the fore in every match that I can remember,” he says.

“The likes of James, Liam (Durcan), Charlie (Bourke), and Adam (Naughton), coming back from his injury problems last year, he’s been a big plus, finding his feet again.

“It’s been a great test for the squad. Ray would always say to us, ‘teams win games but panels win competitions.’ Never has that been seen in a more tangible way than the Knockmore campaign this year, when you think of the impact of the bench and what we might call ‘panel players.’ Ryan McDonnell came on and saved a penalty against Ballintubber; Keith Ruttledge and Liam Durcan came on against Garrymore when they were in bother and turned the tide.

“This is probably the first year in a long, long time that Knockmore have had so many players in Mayo squads. Not just the senior squad, but the under-20s too. You had four in with the under-20s and four with the seniors; it’s a long time since Knockmore had that level of involvement in a county set-up. That’s fantastic and we’re seeing the benefit of it now.”

The role of Colm Reape is one into which Kilcoyne has particular insight. Like Kilcoyne, Reape has transitioned from a forward to a goalkeeper. Granted, in the former’s case, his second life between the sticks was a forced consequence of his knee injury, but he can still appreciate the work Reape has done to complete the switch and to perform his new role to such a standard that he was called into the Mayo panel last year.

“It would have been easier for Colm because he has a history of playing in goals in soccer, and playing to a really good standard,” offers Kilcoyne.

“So he had huge experience as a keeper and would have been known in Knockmore as an accomplished goalkeeper.

“The way the game is going, in terms of the role of the goalkeeper, suits that type of player. Colm has the attributes to be as good a modern goalkeeper as a more traditional goalkeeper: he’s 6-foot-3, commands the area really well, he’s an incredible kicker of the ball. He can put it to your throat from 70 yards, which is a massive weapon to have.

“He’s a really good shot-stopper, has good agility. But the fact that he has played outfield makes him a really good goalkeeper for the modern role in that he’s so comfortable on the ball. His kick-passing is really good, he makes good decisions, he has that burst of speed where he can get out of trouble if he needs to.

“All of that adds up to him doing the job really well, because he has the tools. All he needed was games to get comfortable with the surroundings. He’s got the reward of being invited into the Mayo squad and the benefit of working in that environment. Hopefully he’ll get the chance to have significant game-time this year with Mayo. There’s great potential there.

“But he’s certainly been brilliant for Knockmore. As I’ve said before, probably the biggest impact I’ve had on Knockmore winning a county title was retiring!” Kilcoyne continues with a rueful laugh.

Kilcoyne’s decision to hang up the boots in early 2020 wasn’t an easy one, and it couldn’t have been made any easier as he watched Knockmore end their title drought later that year. He had played for 16 of the 22 years between county titles and stepped away just before the breakthrough came. Asked if it was a bittersweet feeling, or if he has any regrets, Kilcoyne is admirably honest.

“There’s a huge part of me that wishes I was able to continue, and would have loved to. Last year was my first year away. I played for 16 or 17 years and the year I retire, they go and win it. I’m not sure if that says more about them or me!

“But I’m living and working in Dublin. Myself and my wife considered, with the pandemic, moving home to Mayo for a couple of months so I could continue to try to play. But we were expecting our second child so with family and work and everything, it just wasn’t possible.

“I would have spoken to Ray regularly and we tried to make it work as best we could but it just wasn’t feasible, neither for me nor for the squad, in terms of me not being there as much as I needed to be.

“I would have loved to continue, without a doubt. But from a body perspective as well, I was finding it more and more difficult to get on the pitch. The impact of the knee injury was starting to tell more on other areas of the body. The level of kicking practice required was taking its toll on groins and glutes and that kind of stuff.

“All in all, it was the right time. From a purely selfish perspective, of course, I would have loved to be part of last year, and this year, but it just wasn’t to be.

“Not bitter; jealous maybe, but not bitter. And more sweet. The McHales are brothers-in-law of mine so to see those guys, and all the friends I have in the squad, have that success was brilliant. I was very lucky to be one of the golden ticket winners for last year’s final when they won it, and I saw them win in Ballina this year. Hopefully I’ll get to see them win a Connacht title this weekend.

“It’s obviously about the team and the squad, but when you see the old faces after the match and the joy that it’s bringing to the club stalwarts, that’s what it’s about. You see the number of Knockmore jerseys being worn around the parish now by the young kids. That’s the power it’s having.

“I remember being a young lad when the ‘96 and ‘97 teams were winning and the impact that had on me and my friends. It’s all positive. And then with the ladies winning the county title as well this year, the club is in such a great place right now.”

Besides, Kilcoyne has other irons in the fire. In early December, he was announced as the new goalkeeping coach for the Longford senior footballers, under the management of Billy O’Loughlin, who Kilcoyne knows well from their time playing Sigerson football for DIT back in 2008 and 2009.

“If I was told five or six years ago that I would end up as the Longford goalkeeping coach, you’d have got great odds on it!” he laughs.

Kilcoyne previously coached the DIT Sigerson team under Michael Hannon, the former Cavan defender who is also part of the current Longford set-up, as is world handball champion Paul Brady. It’s his first involvement with inter-county coaching and while it’s still early days, it’s clearly a role he can’t wait to get his teeth into.

“I’m gone in as goalkeeping-slash-place-kicking performance coach, which is great because it gives me a broader spectrum on both sides of the ball,” he says.

“It’s very early days, a lot of the more established players are just starting to come back now. We’re getting ourselves set for the league, and we have the O’Byrne Cup coming up in the next couple of weeks.

“For teams in Division 3 and 4, the league is the championship, as such. If we could get a promotion to Division 2, that’s a really good year. That’s what we’re working towards.

“I’m looking forward to where it goes through the year. It’s a brilliant opportunity for me, my first full-time gig happens to be with an inter-county team, which I didn’t expect to be honest. But it’s a great experience and hopefully I can bring something to the table.”