An autograph book like no other is housed in Mayo

One of the most precious items in the Jackie Clarke Collection is an autograph book that captures Irish history in the making, writes Sinead Mitchell-Brennan

In the ornately decorated Library Room of the Jackie Clarke Collection, a striking pair of framed portraits hang over the fireplace. They are rare lithographs, based on the famous Sir John Lavery portraits of Michael Collins and Arthur Griffith.

The portraits were painted in London during the weeks in which the Anglo-Irish Treaty of December 6, 1921, was painstakingly negotiated and signed, a century ago. It was a document that altered the course of our island’s history.

The truce, which ended two and a half brutal years of the War of Independence, had been signed on July 11. The hour for both sides of the bloody conflict to meet at the negotiating table was nigh.

Collins and Griffith were the chief negotiators in an envoy of five Irishmen sent to London in October of that same year, tasked with reaching an agreement with Great Britain. The pair, alongside Robert Barton, George Gavan Duffy and Eammon Duggan, had been carefully selected by Éamon de Valera.

Collins had been initially reluctant to go. de Valera was resolute in his own decision to stay and offer guidance to the plenipotentiaries from Dublin.

The Treaty, signed in the early hours of the morning of December 6, brought into being a 26-county Irish Free State. Ireland was granted dominion status within the British Commonwealth of Nations.

Members of the new Irish parliament would swear an Oath of Allegiance to the new Free State and to King George V. A Boundary Commission would be established to draw up a border with Northern Ireland.

The resolution of one conflict had sown the seeds of another, more bitter and divisive, yet to come.

Each of the Lavery prints in the Jackie Clarke Collection is signed in the margins, both by the artist and the sitters respectively. Collins’ autograph is ‘as Gaeilge’; his neat spelling of ‘Mícheál Ó Coileáin’ more delicate than one expects from the hand of ‘The Big Fella’. He wears a three-piece suit and a half-smile.

Griffith, complete with his trademark moustache and wire spectacles, seems to exude the quiet confidence of a seasoned politician. The unmistakable features of both men are masterfully captured by Lavery, the celebrated Belfast-born portrait artist who counted Churchill and Queen Victoria among his subjects.

I have stood before these lithographs many times before, on the third floor of the beautifully restored former Provincial Bank, built in 1881, which I am privileged to call my place of work. How often I have marvelled at the foresight of Jackie Clarke to add these remarkable artifacts to his unparalleled collection of 100,000 items of Irish historical material spanning four centuries.

On the 100th anniversary of the signing of the Treaty, I find myself more entranced by the faces of Collins and Griffith staring back at me. I try to imagine the great weight of responsibility on their shoulders as they sat with their fellow plenipotentiaries in 10 Downing Street and faced a team of experienced British politicians, led by Prime Minister David Lloyd George, aptly nicknamed ‘The Welsh Wizard’.

I visualise the dramatic scene when Lloyd George issued his now-infamous final ultimatum to the Irish delegation — sign or unleash ‘terrible and immediate war’ on Ireland and her people. 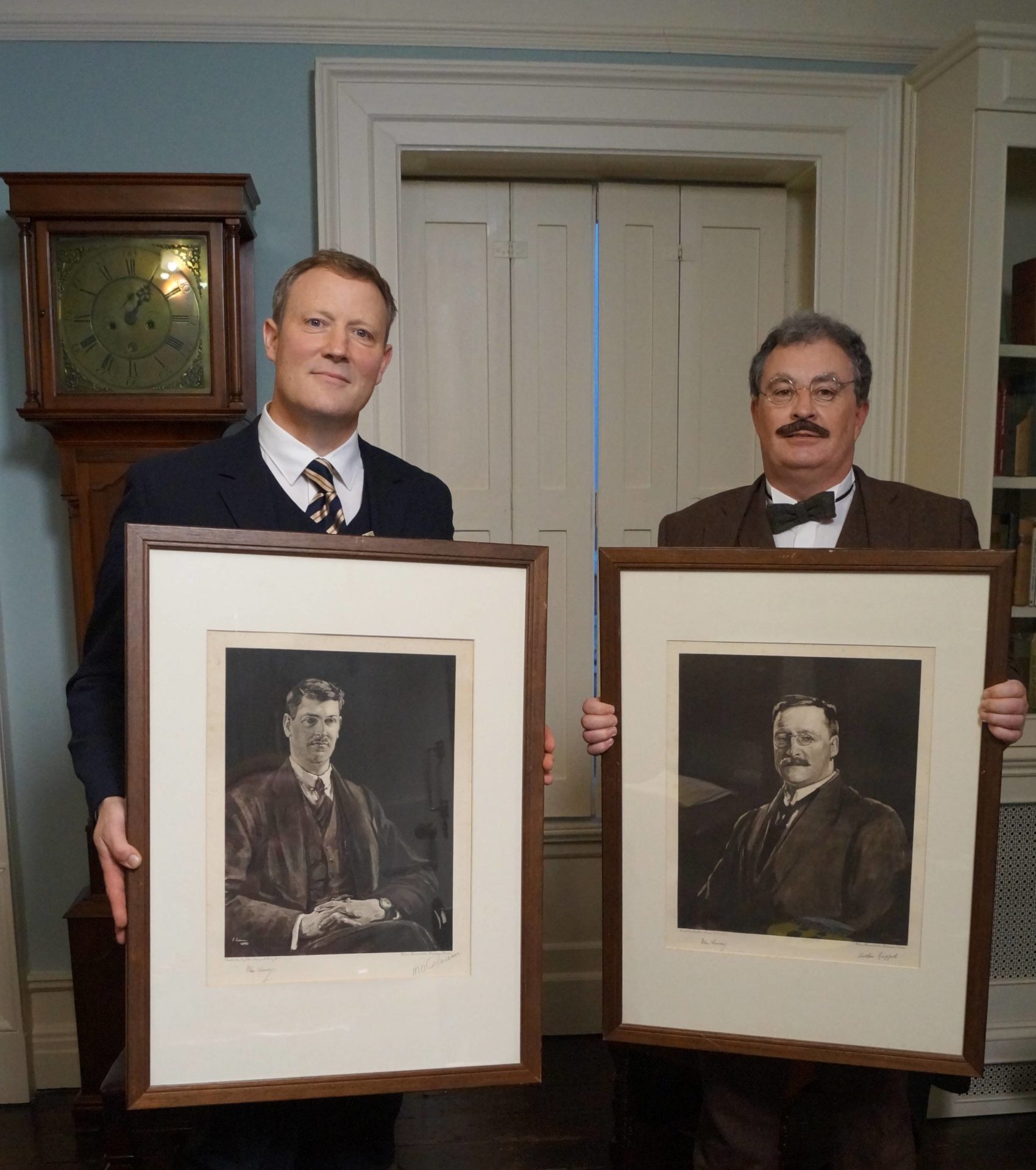 Pictured are Shane O’Boyle, playing Michael Collins in the Jackie Clarke Collection’s short film on its treaty notebook, and Paul Brennan, playing Arthur Griffith. Both men are holding rare copies of the Lavery Portrait Lithographs that the late Jackie Clarke also collected during his lifetime.

There is added poignancy attached to the Lavery portraits too, given that both men were dead within eight months of sitting in the artist’s studio.

Griffith died suddenly on August 12, 1922, at the age of 52. The cause was heart failure, giving his widow Maud occasion to remark “his blessed little heart broke for Ireland”. Collins was dead within ten days — shot in an ambush at Béal na mBláth in his native Co Cork on August 22, 1922, in the third month of Ireland’s bitter Civil War. He was aged just 31.

His own foreboding premonition had come true. Having signed The Treaty, he declared: “I have signed my… death warrant.”

Much had been written about the events in London in December 1921 when the hopes of a fledgling nation met the iron will of a great Empire. The complex details of the ‘Articles of Agreement’ have been picked apart. The personalities involved (those who went, and those who stayed) continue to be critiqued. An endless stream of ‘what ifs’ and ‘if onlys’ have spawned a century’s worth of debate, and too often, division.

There is another remarkable artifact in the Collection which brings the modern reader even closer to the events of December 1921. It is a leather-bound autograph book, in the typical style of the day, when such little notebooks were a popular way of recording names of friends, marking important family occasions and social gatherings.

Autograph books are a recurring feature of the Irish Revolutionary period, often associated with imprisonment and interment. The names of fellow prisoners, drawings, poetry, quotes, and patriotic slogans were routinely gathered by the owners.

The ‘Treaty Autograph Book’ is a contemporary manuscript like no other. It is emerald green in colour. The decorative gilding which trims its edges has faded slightly with the passing of a century. Within its 100 pages are almost 130 signatures.

As each page of this is turned, name after name is revealed — amounting to a veritable rollcall of all the leading figures associated with the Anglo-Irish Treaty and the preceding War of Independence.

The majority of the signatures were added in London in the closing days of the negotiations — Arthur Griffith, Michael Collins, Robert Barton, Eamon Duggan and George Gavan Duffy all signed their names in Irish. A blank page was set aside for Erskine Childers, principal secretary to the delegation, but for reasons unknown, his entry was never made.

This seems a rather heart-wrenching omission, given that Childers would be executed by firing squad at the Beggars Bush Barracks in November of the following year.

Éamon de Valera’s autograph is dated December 19, 1921, the President of the Republic adding his name in Dublin upon the return of the delegation. The first page of the notebook had been left blank for him, perhaps an indication of the esteem with which he was held.

Eamon de Valera’s signature in the Treaty Notebook, which is one of the most precious artifacts in the Jackie Clarke Collection.

The compiler of this unique record was clearly a person with access to the plenipotentiaries and Dáil Éireann, most likely a member of the secretariat or advisory personnel, who made up the sizeable — and vitally important — ancillary staff who travelled to London in October 1921.

Many of the signatures are accompanied by ’22 Hans Place, Knightsbridge’ — the headquarters occupied by the delegation, a short distance from Harrods Department Store.

Close associates of Michael Collins, including his ‘Dublin Castle Spy’ Eamon ‘Ned’ Broy, and four of his loyal squad of men known as the ‘Twelve Apostles’.

There are names of those who would be dead within 18 months — in that dark chapter when comrades of old turned to fresh enemies. The autographs of Liam Mellows, Cathal Brugha, Joe McKelvey and Seán Hales all frozen in time.

The final page of the ‘Treaty Autograph Book’ is split into two columns by a hastily drawn line. The words ‘For’ and ‘Against’ are jotted above each. It is January 7, 1922, and the members of Dáil Éireann are voting on the Anglo-Irish Treaty.

The tally is crudely recorded — a series of tiny pen strokes that will amount to a monumental moment in our nation’s history. 67 are in favour of the Treaty. 54 are against.

Yes, the lines were indeed drawn.

Two columns: one for, one against.

The fate of a nation caught in the middle.

■ Sinead Mitchell-Brennan is the Educational Facilitator at the Jackie Clarke Collection in Ballina.