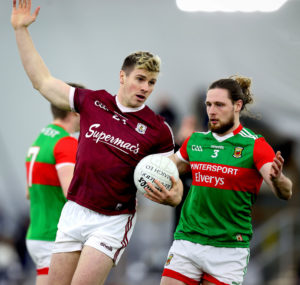 The Ballina Stephenites pairing of Sam Callinan and Frank Irwin, Castlebar Mitchels defender Donnacha McHugh, Cill Chomain captain Justin Healy and Jack Mahon from Charlestown Sarsfields all made their first senior starts for Mayo in Friday night’s FBD Connacht League semi-final clash with Galway, a game that ended in a four points triumph for the Tribesmen, 0-17 to 0-13.

Paddy Heneghan and Ruairi Keane were other newcomers for the Green and Red when handed second-half appearances in this clash at the NUI Galway Air Dome in Bekan but manager James Horan’s focus will immediately turn to the National Football League after his side’s early exit from the pre-season competition.

Galway were the deserving winners and from the start had fielded what, on paper, seemed a stronger team than Mayo, with six of their front eight having all played senior championship and some very experienced operators on show in defence too, like Liam Silke and Johnny Heaney.

Fergal Boland and debutante Sam Callinan had scored the opening points for Mayo but the Tribesmen held a 0-5 to 0-3 lead at the end of the opening quarter, as Damien Comer struck a brace to compliment converted frees by Dessie Conneely and Rob Finnerty and a point from play by Heaney.

Mayo were fortunate that Cormac McWalter had found the side-netting from a 17th minute goal chance and were reliant for much of the rest of the half on the free-taking of Fionan Duffy for points, with the Crossmolina man scoring four in total before half-time and Ballina man Frank Irwin picking one off from play.

Paul Conroy hit three points for Galway in the second quarter and that was the margin between the sides at half-time, 0-10 to 0-7. 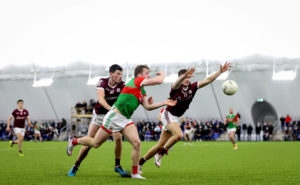 Mayo received a big bounce from the second-half introduction of Ryan O’Donoghue and the first-time All-Star had four points on the board inside twelve minutes, three from frees, as the locals closed their arrears to the minimum. But amazingly, Fergal Boland’s second point of the game, in the 52nd minute, was to be Mayo’s last of the game from play. Indeed they managed just an O’Donoghue free for the entire fourth quarter, as Galway gained momentum off the arrival of Shane Walsh to their attack. Substitutes Pat Kelly and Dylan Canny both hit goal chances against Mayo’s woodwork but Padraig Joyce’s side pushed on for victory nonetheless, with Walsh, two, frees, and fellow subs Thomo Culhane and Paul Kelly all raising white flags down the stretch.

Galway will play the winners of Saturday evening’s Roscommon v Sligo clash in the final next weekend.