Cafferkey is brutally harsh in self-assessment of Mayo career

Former Mayo footballer Ger Cafferkey has offered a brutally harsh self-assessment of his playing career in a new book in which more than 100 inter-county footballers, hurlers and camogie players – past and present – have shared some of the tips and lessons they have picked up along the way. 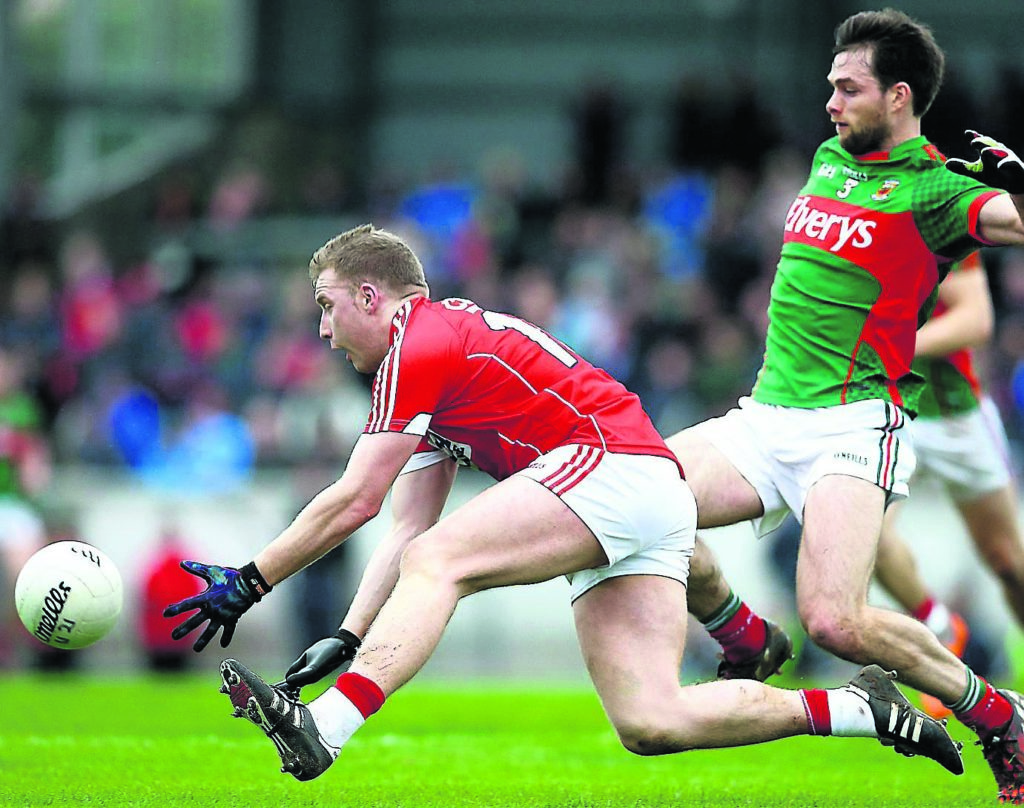 Ger Cafferkey in action against Brian Hurley of Cork in 2016. Picture: INPHO/James Crombie

Sean O’Sullivan’s The Players’ Advice is a book by GAA players for GAA players, in which advice is divided into six sections as goalkeepers, full-backs, half-backs, midfielders, half-forwards and full-forwards all speak from experience on subjects such as mental attitude, skill development, game preparation, recovery, lifestyle, nutrition, and much more too.
Ger Cafferkey and a fellow stalwart of the full-back line Keith Higgins, along with their former teammates Tom Parsons, Conor Mortimer and current panellist Jason Doherty, are among the Mayo footballers to feature in the book, so too ladies stars Sarah Rowe and Fiona McHale, but none speak more frankly about their own ability than Cafferkey.
The Ballina Stephenites man won three Connacht U21 titles in-a-row and five Connacht SFC titles in-a-row, an All-Ireland U21 medal and a National League too, appearing in five All-Ireland SFC finals, a replay included. Yet despite all that success and his longevity (Cafferkey made 104 senior appearances prior to retirement in 2019), the defender puts the All-Star award he won in 2012 down to little more than hard work.
“Being very honest, I was a very average footballer. I used to say to myself that I am only two per cent better than an average club full-back,” Cafferkey says, attributing one per cent to experience and the other one per cent to effort in preparation.
“During the game, I knew if I ever dropped my effort on the latter then I would become an average club full-back.
“The question is – who do you compete against in training? If you are only running fast enough to beat the next fastest player on your club team, that defines your limit. Somewhere in the country, I knew there was a full-forward training and improving. I used to picture him and race against him in my head at training,” added the man who made his senior debut against New York in 2009. 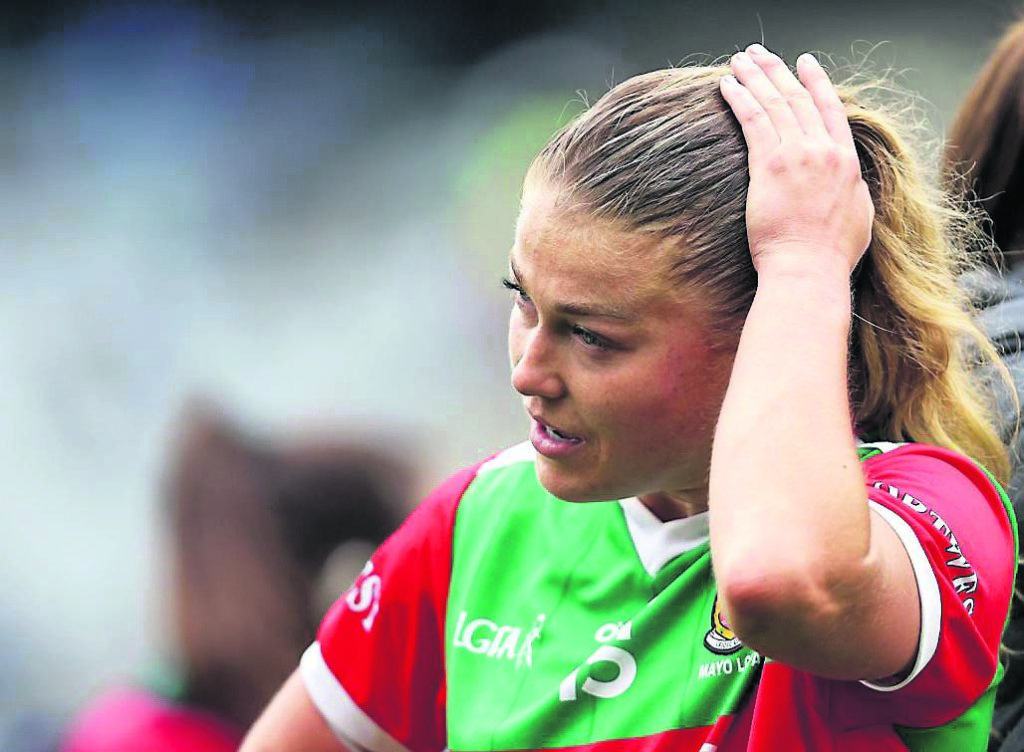 Mayo ladies star Sarah Rowe has said that playing multiple sports at a young age helped to give her a strong character. Picture: INPHO/Laszlo Geczo

Topically, given the amount of discussion about criticism levelled towards the Mayo football team after this year’s All-Ireland final, Ger Cafferkey delves into his personal experience and remembers a time when he had become addicted to reading about himself.
“I was part of successful minor and under-21 Mayo teams from 2005 to 2008. At the time there was limited social media. Traditional media was run by reputable local journalists that wouldn’t criticise such a young player. All the reports were great and stoked my ego. I became addicted to reading about how great I was. In 2009 I started playing senior football. All of a sudden I was fair game for criticism in traditional media and trolls started appearing on social media. It took years to wean myself off the need for external validation.
“If I was to redo my whole career, I would have ignored it in my early days. If you can’t stomach the bad reports then you can’t rely on the good ones,” he remarks.
Keith Higgins, for so long an occupant of a corner-back berth alongside Ger Cafferkey, is another contributor to the book and explains the importance of gym work in the prevention of injury and developing core strength. Admitting that he was “a bit behind everyone else” when it came to fully utilising the benefits of good strength and conditioning, Higgins says it was over the last three or four years of his inter-county football career that he really discovered huge benefits.
“For me, the gym work has never been about putting on lots of muscle, it was more about getting good core strength and maintaining that explosive power which I feel really added to speed on the pitch, which was an important part of how I play. But I would advise any young players out there if they are doing gym work to seek proper help and get the right type of programme, especially starting off.”
In 2018, Tom Parsons suffered horrific injuries while in action for Mayo against Galway in the Connacht SFC. Dislocating his knee, the Charlestown man also tore his cruciate ligaments, hamstring and calf. It was suggested at the time that being able to run again might even be beyond Parsons yet the following season he appeared as a second-half substitute in Mayo’s All-Ireland SFC semi-final against Dublin. Now the CEO of the Gaelic Players Association, the former midfielder describes in The Players’ Advice that his unlikely return to the Green and Red colours was due to determination, hard work and belief.
“For anybody struggling with injury, my advice is be patient, listen to your body, trust the professionals, and get to work. Your body will respond and heal when given the right environment. [With] sleep, good food, de-stress and consistent rehab, I believe we can overcome all injuries.”
Tom Parsons admits he often returns to the advice, ‘Do what is hard and life will be easy, but do what is easy and life will be hard.’
“Never underestimate the power of hard work, positive mental attitude and trust in others,” he says.
Ballina native Sarah Rowe is currently preparing for a fourth straight season in the Australian Football League, something its winter season and Gaelic football’s spring-summer season allows for. But Rowe is also an exceptionally talented soccer player and represented the Republic of Ireland during her teenage years and feels that some of the difficult days she experienced on international duty have, in the long run, been of great benefit.
“Playing multiple sports has definitely given me a stronger character. I’ve had to be resilient. Playing soccer with Ireland, I’d a tough few years where I wasn’t getting selected, then selected, dropped, and selected again. Times like that really test you, because you’re used to being in an environment like your club or somewhere where you’re constantly excelling.
“It’s the times you get knocked back that teach you the most about yourself and your character. You can hide by blaming other people, but it needs to come from within. Reflect on yourself and your ability and what you can do better. Control the controllables.
“I think being involved in a lot of different team environments like soccer, football and AFL have taught me how important it is to have a strong team culture. You can’t get anywhere without your teammates. What works for me mightn’t work for you, but it’s important that we all work together. It’s about finding a way to work with other players, who don’t think the same way as you. Remember your way is not the only way.”

The Players’ Advice by Sean O’Sullivan is published by O’Brien Press. Featuring forewards by Mick Bohan and Marty Morrissey, all the royalties are going to Self Help Africa, the charity made popular by former Galway GAA dual star Alan Kerins.