2021 Super League Team of the Year

Super League Team of the Year

With the Super League all said and done, it is time to take stock and name the players who make up the league’s best XI.

There were some positions on this team that were easy to pick but there are other spots where players might feel harshly done by but such is the essence of team of the season awards. So without further adieu, the Edge of the Box team of year is as follows:

Peyton was exceptional for Ballina this season as they finished the season in second place. A brilliant keeper who demanded the very best out of those outfield, commanding from his area for 90 minutes.

Ballyheane’s resident penalty specialist wasn’t just about the spot kicks, although he did score a handful of them. He was a constant attacking threat on the right flank and ably carried out his defensive work when called upon.

Moore has looked at home in the Ballina backline during his first season in Belleek having moved up from Manulla. Formed a brilliant partnership with Dan Gorman in the second half of the season.

A real creative force for Ballyheane, attacking from left back. He proved to be one of the best players in the league and will only get better from here.

Claremorris had an excellent season and would not be too far off a title challenge of their own. Mark Maloney was one of the most impressive youngsters in the Super League and has a bright future ahead of him.

If not for the goals and overall effort of their captain Andy Cunnane, Ballyhaunis would have found it very tough to stay in the league this season.

Another captain fantastic in centre midfield, Kilcoyne was one of the most underrated players in the league the last couple of seasons but not many will overlook him now.

Another brilliant season for the winger, who made life hell for manys a full back up and down the league. His importance to Ballina cannot be overstated.

One of the best footballers in the Super League and the key man in Ballyheane’s title win. A goals and assists machine and could have future in the javelin with those long throw-ins.

A serious operator up front for Ballyheane. Scored in 10 out of their 13 matches and was a constant danger to the opposition. 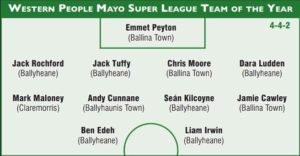