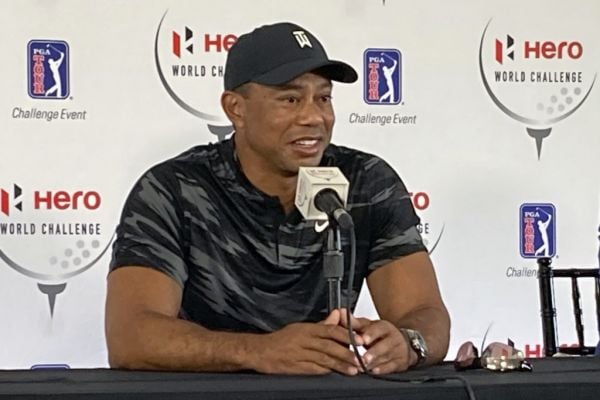 Tiger Woods admits he is lucky to be alive following his horrific car crash but he intends to resume playing golf and would love to feature in The Open in 2022.

The 45-year-old 15-time major winner was in pain throughout as he addressed his first press conference since February’s crash.

Woods, who completed a remarkable recovery from back surgery to win his 15th major title at the Masters in 2019, spoke about the “dark moments” he went through during his recovery from the single-vehicle accident.

He required surgery on open fractures to his lower right leg and further injuries to his foot and ankle and said at one point he feared that his right leg could be amputated.

“It was on the table,” he said at the Hero World Challenge event he is hosting in Albany. “I’m lucky to be alive but also still have the limb. Those are two crucial things.

“I’m very grateful that someone upstairs was taking care of me, that I’m able to not only be here but also to walk without a prosthesis.”

Woods, who was found to be travelling at almost twice the legal speed limit when he crashed, spent three months confined to a hospital bed before being transferred to a wheelchair and then crutches.

“It’s been a lot of hard work,” he said. “There were some really tough times, just laying there. I was in a hospital bed for three months.

“It’s hard to explain how difficult it’s been, to be immobile for three months. I was just looking forward to getting outside, that was a goal of mine.

“I was just looking forward to getting outside. Eventually I got to a point where they could wheelchair me out and I could feel the sun, that was like a milestone.

“I built a really nice house but I didn’t realise how big it was until you start putting crutches on.

“I am on the better side of it but still have a long way to go.”

Woods, who ducked questions about the actual crash, says he is “at peace” with his rehabilitation and intends to resume playing but is not setting a target date.

“As far as playing at the Tour level, I don’t know when that’s going to happen,” he said.

“I’ll play a round here and there, a little hit and giggle, I can do something like that.

“The USGA suggest playing forward, I really like that idea now.

“To see some of my shots fall out of the sky a lot shorter than they used to was a little eye-opening but at least I’m able to do it again. That’s something. For a while there it didn’t look I was going to.

Looking forward to a great week at Albany for the #HeroWorldChallenge! pic.twitter.com/LpNT6ClZ4j

“I am able to participate in the sport of golf – now to what level, I do not know. I’ll keep you abreast.”

Asked if playing at the 150th Open at St Andrews was a possibility, Woods said: “I would love to play at St Andrews, there’s no doubt about it. It’s my favourite golf course in the world.

“Physically, hopefully I can. I’ve got to get there first. Tournament’s not going to go anywhere but I need to get there.”