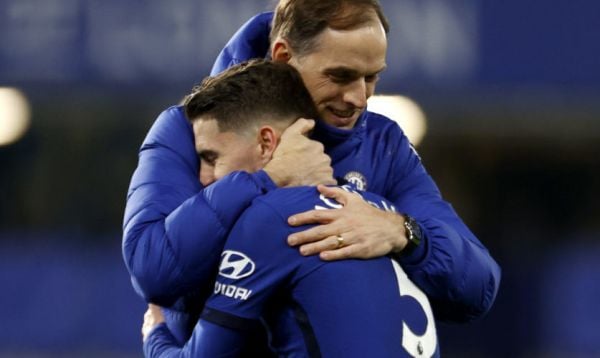 Midfielder Jorginho, who is an injury doubt for Wednesday’s Premier League trip to Watford, helped the Blues to Champions League glory last season before being a key figure in Italy’s Euro 2020 triumph.

But the 29-year-old was unable to cap a memorable year with football’s greatest individual honour as Messi collected the accolade for a record seventh time, just ahead of Bayern Munich striker Lewandowski.

With Chelsea crowed club of the year at Monday’s ceremony in Paris, Tuchel insists he is far more interested in achieving collective successes.

“I have huge doubts about individual awards in this game because the game is very complex, it’s related to a lot of luck and it’s a team effort,” he said.

“Not one single player can win a match of football, it’s not possible.

“If individual players shine, it’s always due to the team effort and that’s why it (club of the year) is a nice award.”

‘A side order of trophies, please.’ 🍽#BallonDor pic.twitter.com/MD3P4wh1uK

Chelsea Women contributed significantly to the club of the year honour, clinching a league and cup double last season under Emma Hayes.

Tuchel continued: “We have a strong academy, a strong women’s team and we want to be a strong part of this club, so full credit to the owner and everybody in charge. We are trying our best to continue and maybe win this award again.

“It shows the ambition of the club and this is what drives us, this is what makes us happy, and what motivates us.

“We don’t do what we do to have – in the end – individual awards but when you have a lot of nominees and get a prize like yesterday, it’s the proof that we showed what the club is all about and how the club is built.

“And it’s on us and me and everybody who works at this club to drive things forward.”

Asked about the outcome of the Ballon d’Or and whether he had expected Lewandowski to win, Tuchel replied: “I take my rights to not have an opinion on this one.

“We had ourselves a player (Jorginho) who won all major trophies and was hugely involved, so it would not have been a surprise if he had lifted the trophy.

“It was a choice and it’s an election (vote) and when it’s elected you have to take it and if you like it or not you accept it and life goes on pretty easy.”

The German has a maiden Premier League title in his sights this term, with his table-topping side sitting a point above champions Manchester City ahead of taking on Claudio Ranieri’s Hornets.

“For tomorrow, we have some players in doubt, maybe we need a bit more time, a bit more examination to re-evaluate the status,” he said.

“It’s Reece James, Jorginho and Timo Werner. They all trained today with us and there will be some last-minute decisions about this.”

Record signing Romelu Lukaku returned from an ankle issue as a late substitute against former club United and is fit to feature at Vicarage Road.

“He came on and he continued to train, there’s no reaction from his injured ankle, so he stayed in training and he’s ready to progress in minutes.”

Meanwhile, Chelsea’s Premier League fixtures against Brighton and Arsenal have been postponed due to their participation in the FIFA Club World Cup.

The Blues, who were due to travel to the Amex Stadium on Tuesday, February 8 before hosting the Gunners four days later, have been drawn to face one of Al Hilal, Al Jazira or Auckland City at the semi-final stage of the global tournament in the United Arab Emirates.

Who is playing in the Africa Cup of Nations’ last 16?