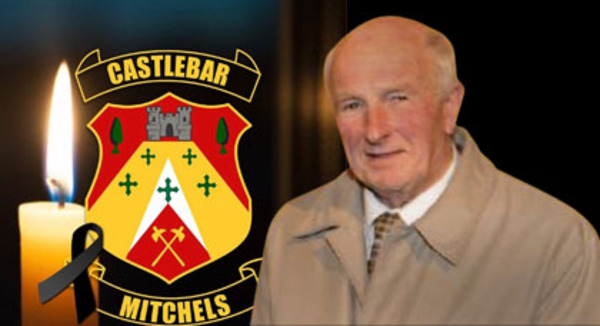 Castlebar Mitchels have led tributes after the passing on Saturday of Patsy Horkan, a widely-known and hugely-respected figure in Castlebar and the surrounding region.

Patsy was a lifelong member of the Mitchels, winning five county titles in a row as a player in the 1950s as part of some great sides which also included his late brothers Peter, Tommy and Seamus.

He subsequently went on to serve as president and chairman of the Mitchels. In a statement, the club said that all of its members had been “deeply saddened” to learn of his passing.

“Patsy was a stalwart of the Mitchels and was very dedicated to the club,” read the statement. “We extend our sympathies to his family and wide circle of friends.

The Mitchels also postponed their AGM, which was due to be held on Saturday night, as a mark of respect to Patsy.

Patsy is predeceased by his son Joseph and is deeply regretted and missed by his loving wife Frances, daughters Catriona, Patrice, Maria, sons Patrick and Kieran, brothers, Sean, Eamonn and Henry, sisters Betty (O’Neill) and Alice (Fox), sons and daughters-in-law, many grandchildren, nieces and nephews, neighbours and friends.

His remains will repose at Coady’s Funeral Home in Castlebar this Monday evening from 5pm to 7pm before removal at 7pm to his residence in Blackfort, Castlebar. Funeral Mass will be held at 12 noon on Tuesday in the Church of The Holy Rosary, Castlebar followed by burial afterward in Castlebar New Cemetery.